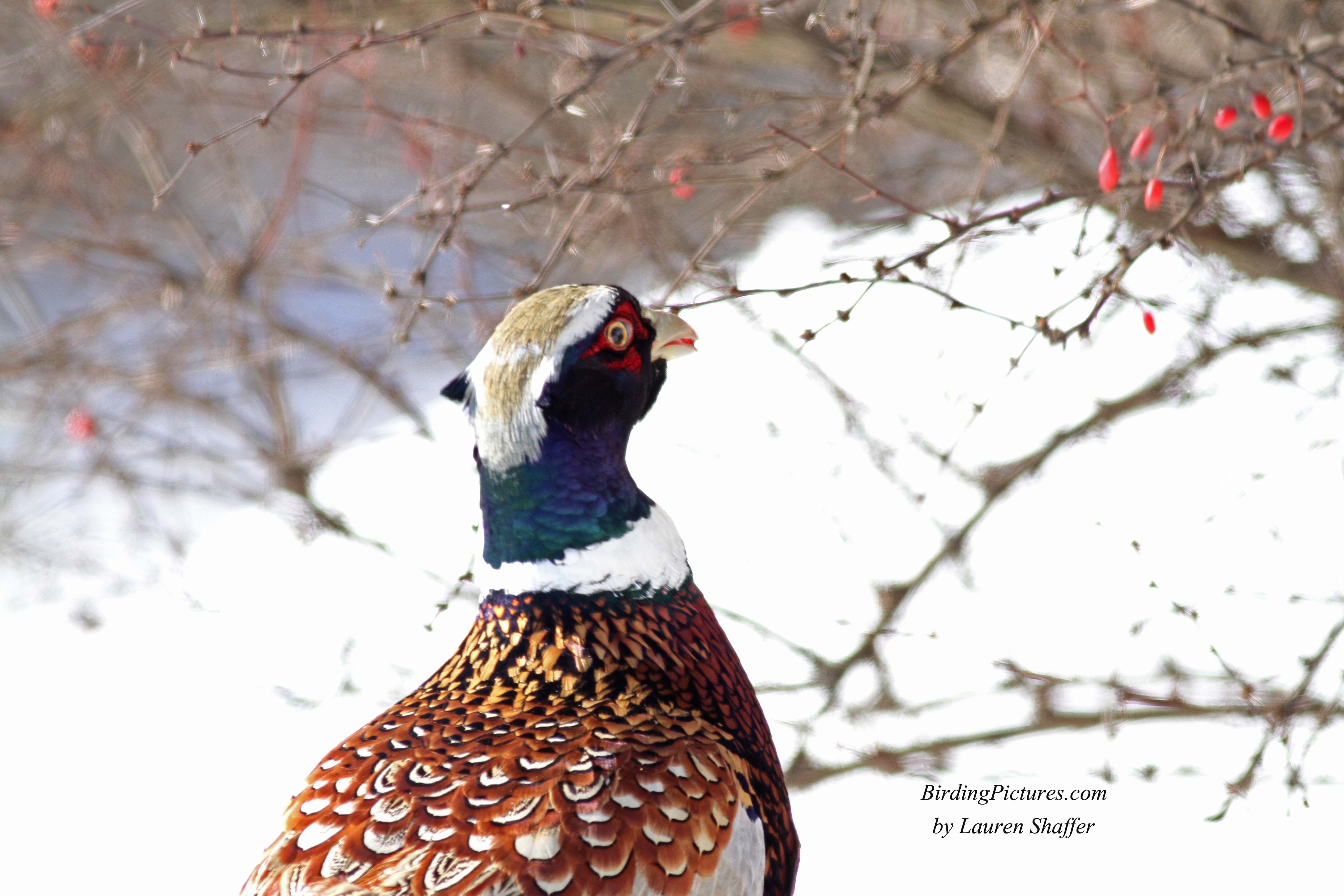 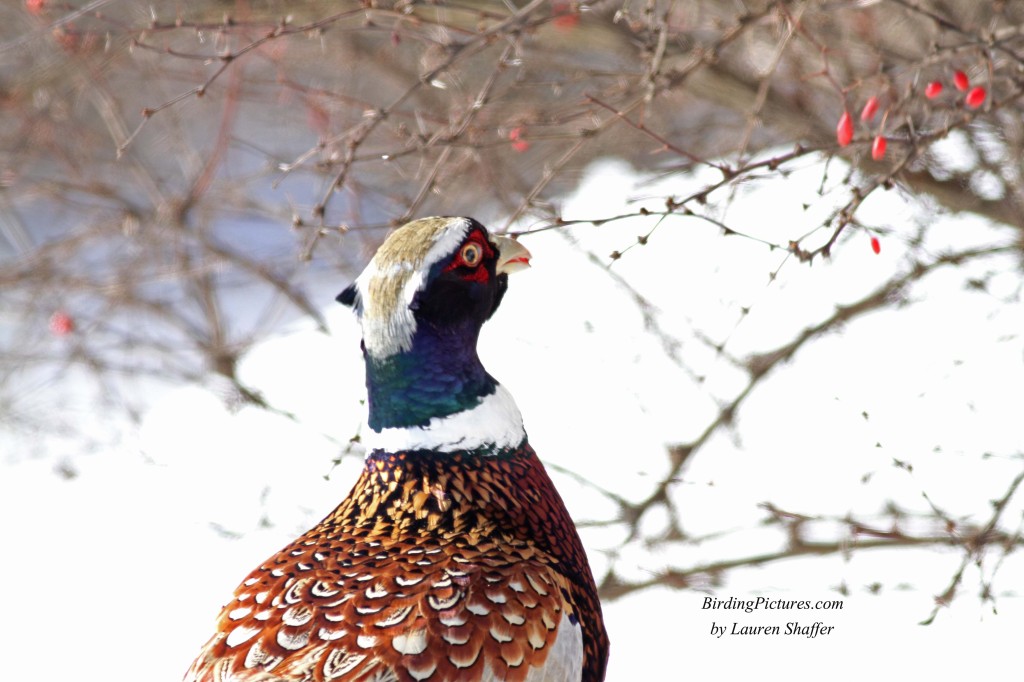 The sun finally came out this morning in rural Central Pa, so I braved the crazy 4 degrees with ear muffs, hand warmers, gloves, heavy coat and boots, and went birding! For four hours!! With the bright snow and the intense sunlight, I was less than happy with the umpteen pictures I took, but it was still fun. I put the seat warmer on, put the window down so I could hear the Horned Larks flying over the fields, and drove the back roads. This is winter road birding at its finest. When there’s something good, the blinkers go on, and the car is parked as far off the road as possible.

We have a Pheasant Recovery area where I live, and wild pheasants which are supposed to be able to live and reproduce in the wild have been introduced from the Dakotas. We see them often in the area, but they still seem rather dim-witted to me. The one above was eating berries from a bush next to a house which had house cats sitting on the porch ten feet away. Finally a gray cat with an ear missing chased it away! You never know what you’re going to see! 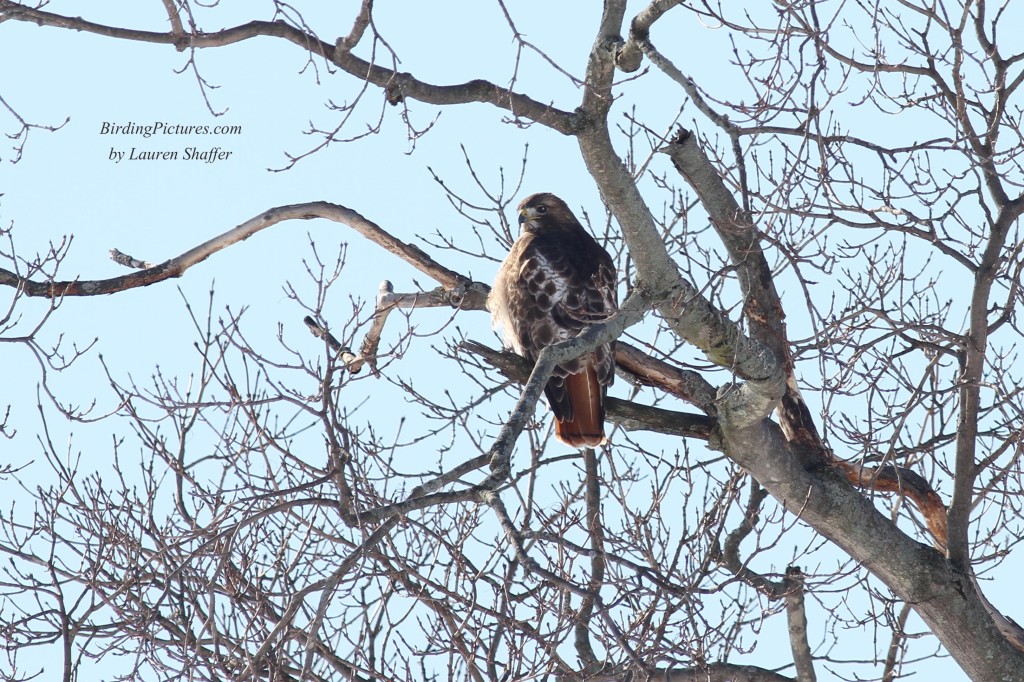 There were 5 Red-tailed Hawks seen on my travels today, with two pairs interacting. This one was giving me the ‘ole stink eye! 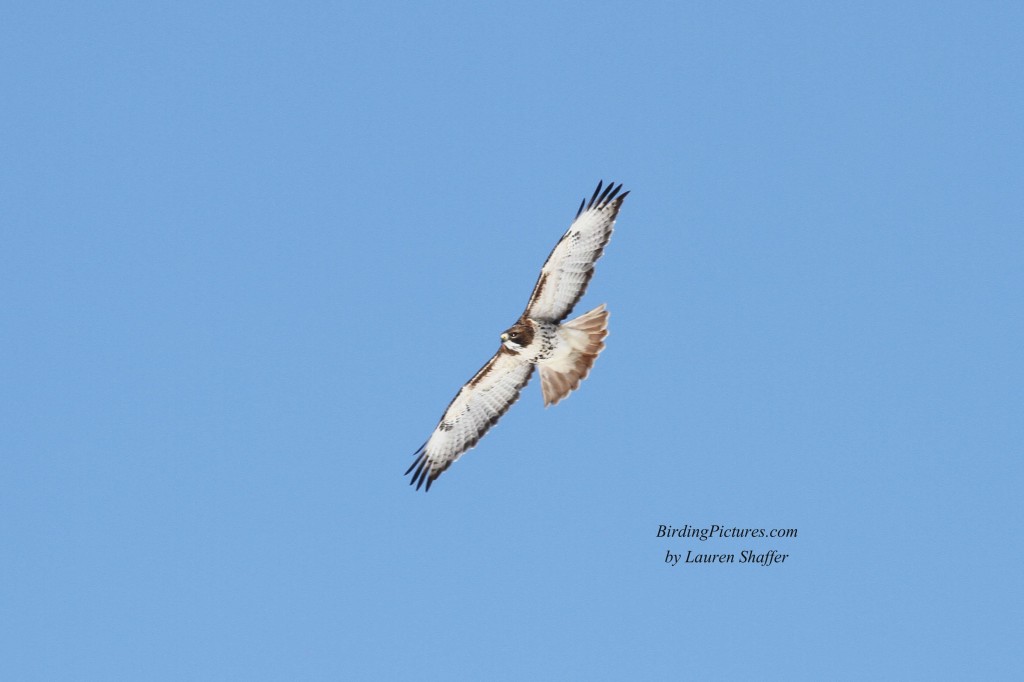 The rufous-colored tail looks pinkish from below. Other identifying points of a Red-tailed Hawk are the dark belly-band streaking, the dark edge on the front part of the wings, and the bright white chest. 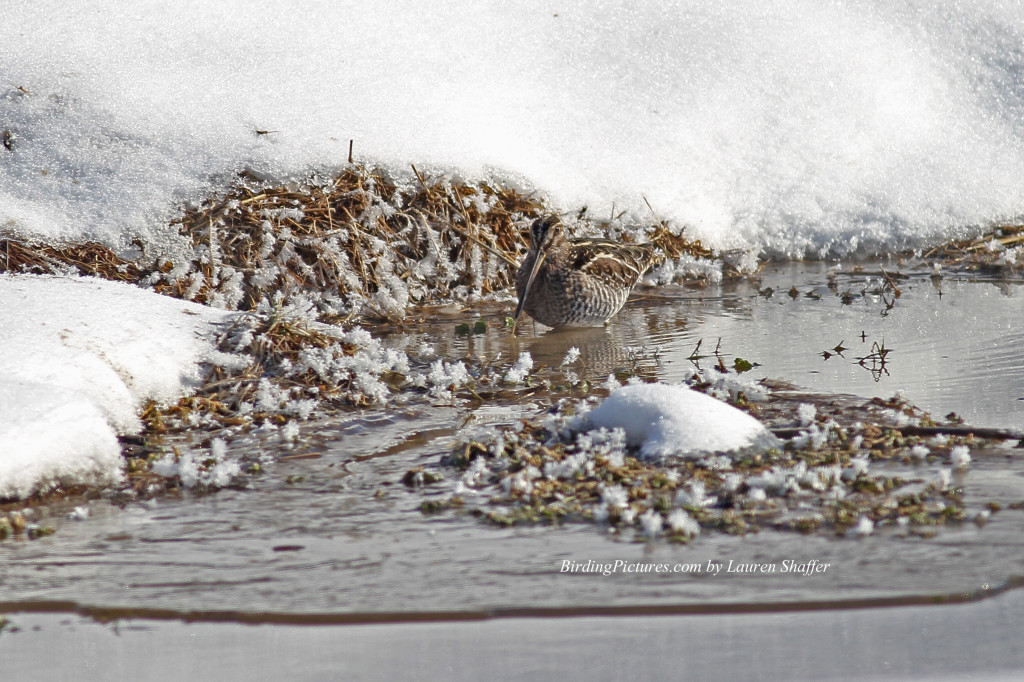 The freezing cold caused the mist coming up from the creek to make little ice formations. A few Wilson’s Snipe were busy pushing their bills deep in the mud, looking for breakfast. Snipe have stripes! 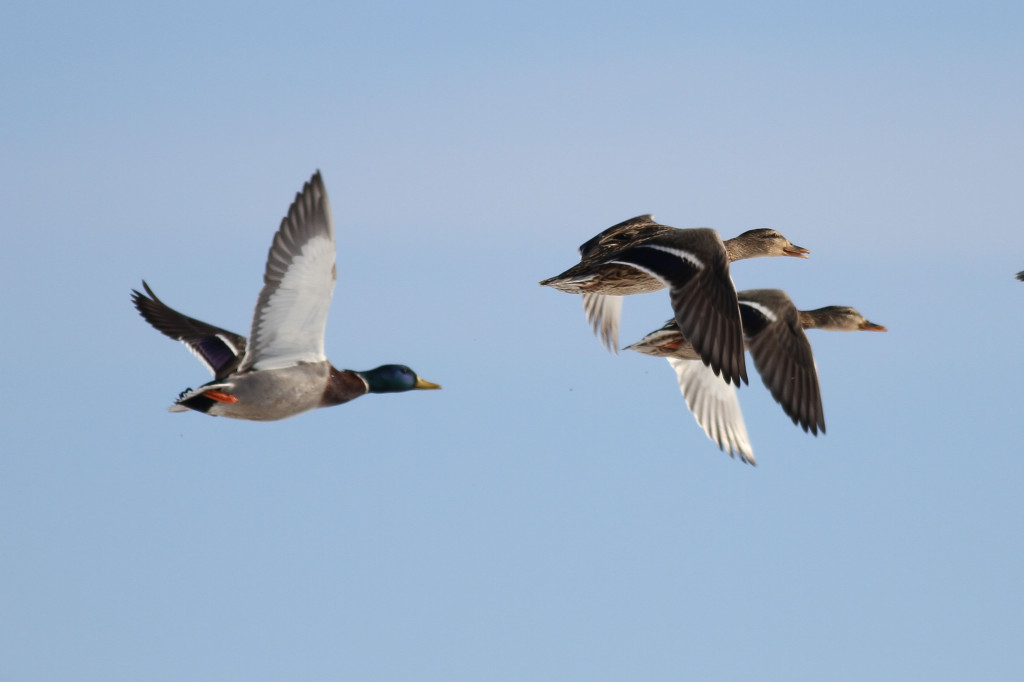 The Snipe didn’t seem bothered by my presence, but the Mallards were. They took off squawking over head to another part of the stream. 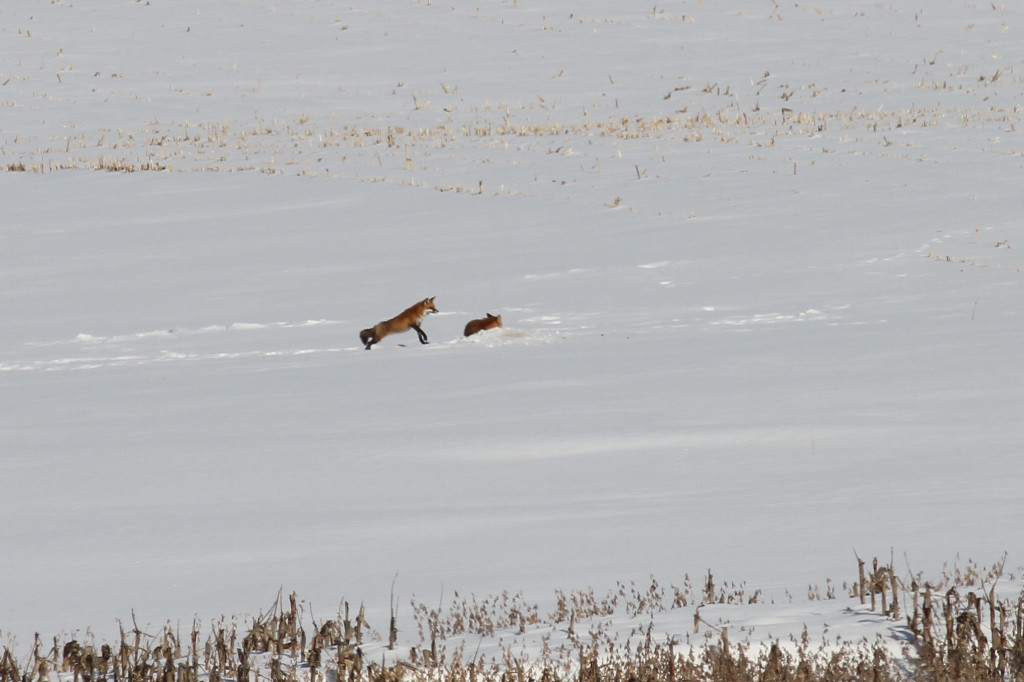 This was a real treat for me; a pair of foxes! One was taking a nap while the other wanted to play. Farmers around here try to dispatch them, but I think they are beautiful! 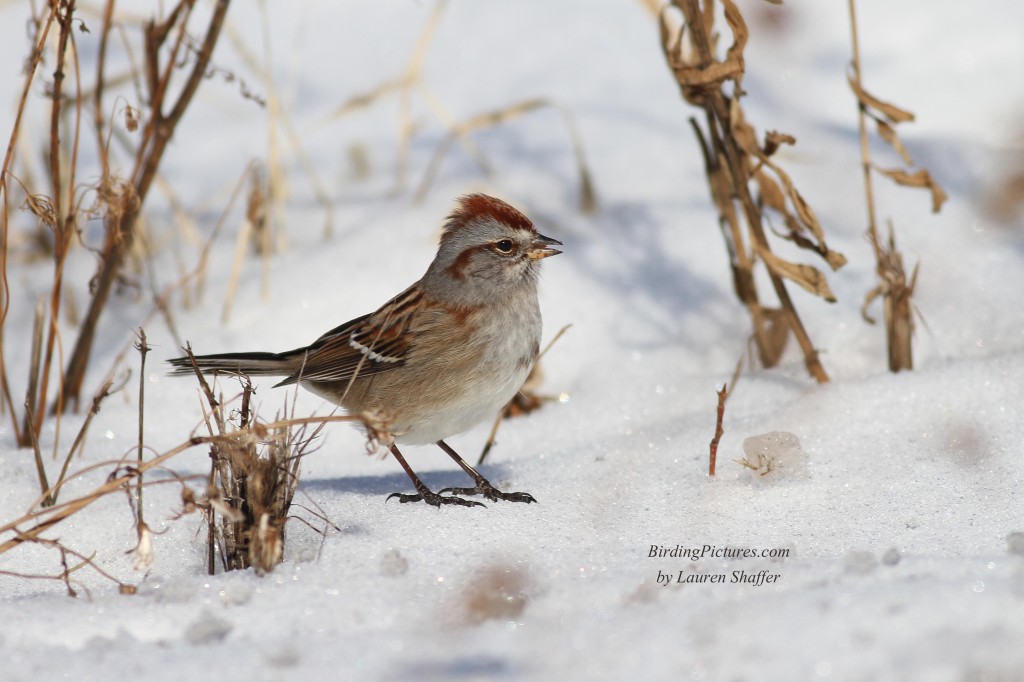 A mixed flock of about a hundred Tree Sparrows and Juncos crossed the road in front of my car. This little guy stayed behind to look for seeds. His rusty cap and smudgy spot on the breast identify him as a Tree Sparrow. 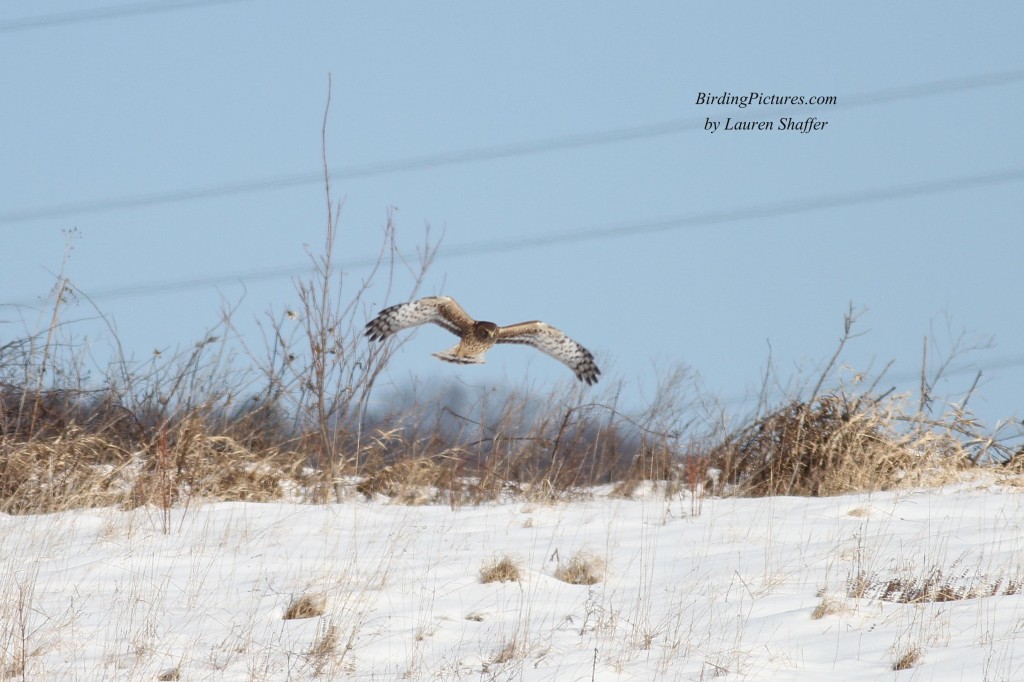 A female Northern Harrier strafed the field, low to the ground , looking for voles. Back and forth, suddenly diving down and coming up with just snow, she worked the field over for about 10 minutes while I watched in awe. 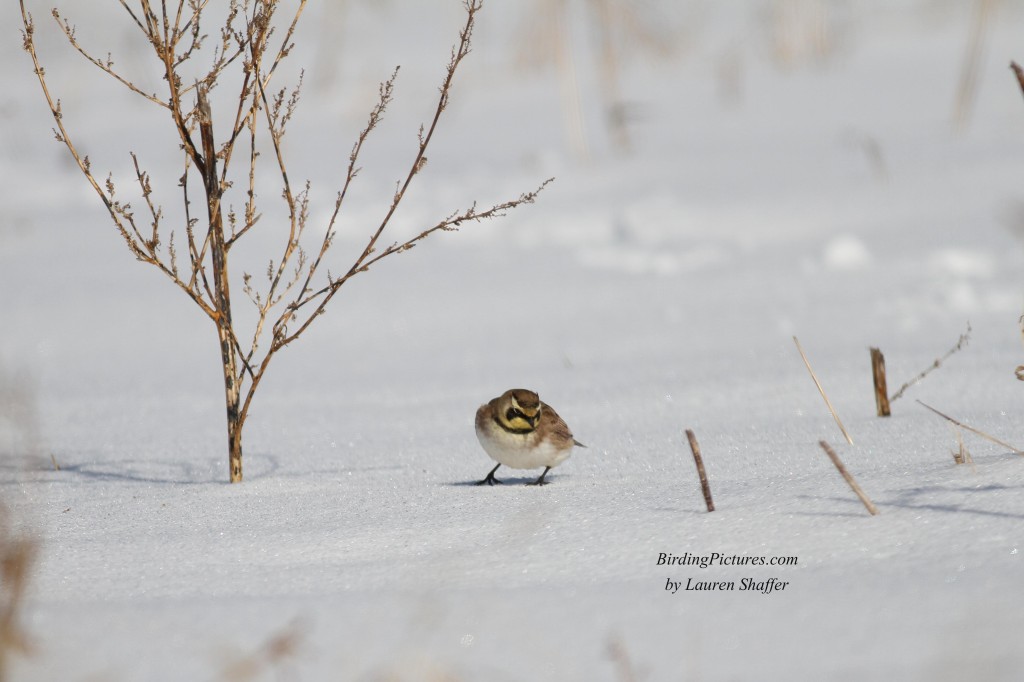 The best way to find Horned Larks is by listening for their high-pitched chittering as they fly over the fields or at the edge of the road. They are so commonly seen along these back farm roads, and yet most people have never noticed them! If you are lucky, there will be a Lapland Longspur mixed in with the Horned Larks, or even some Snow Buntings. No such luck today, but it was a very satisfying road trip!

Leave a Reply to Mustafa ×