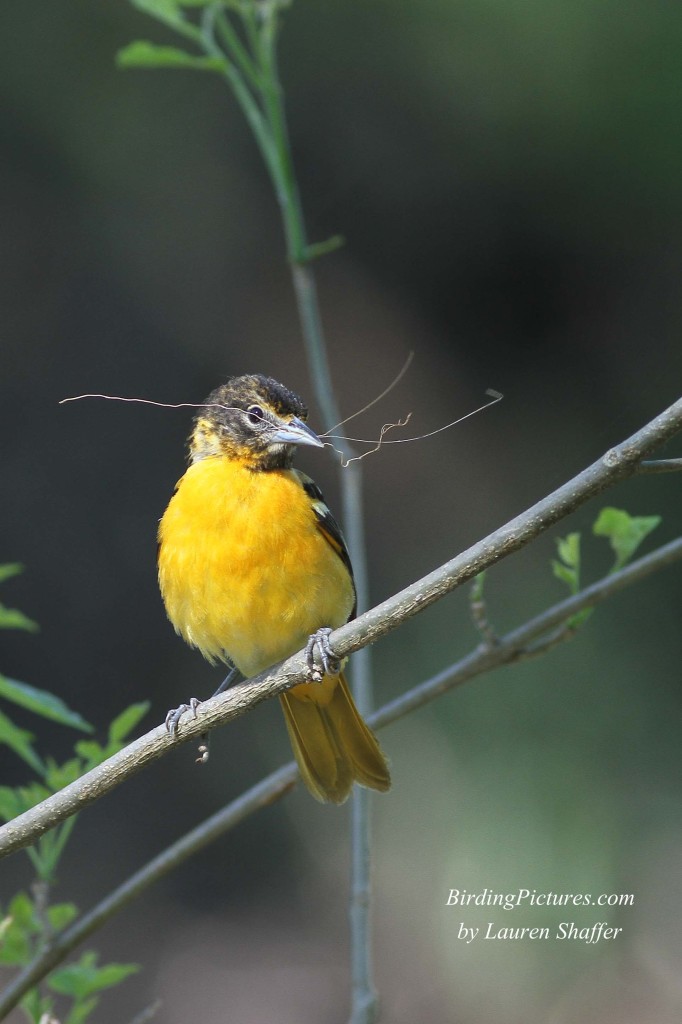 Baltimore Orioles have been busy in the neighborhood!  They’ve stopped coming to the deck for oranges and have dispersed to other places busily weaving their nests and tending their babies.  They like to use long plant fibers, some of which they strip from the old dead plants such as milk weed and other weeds.  Their hanging basket nest is fairly elastic and will accommodate parent and growing babies.  I have a friend who brushes out the horses’ tails and saves the hair to put out for the Orioles around Mother’s Day.  They actually come looking for it to use for their nests! 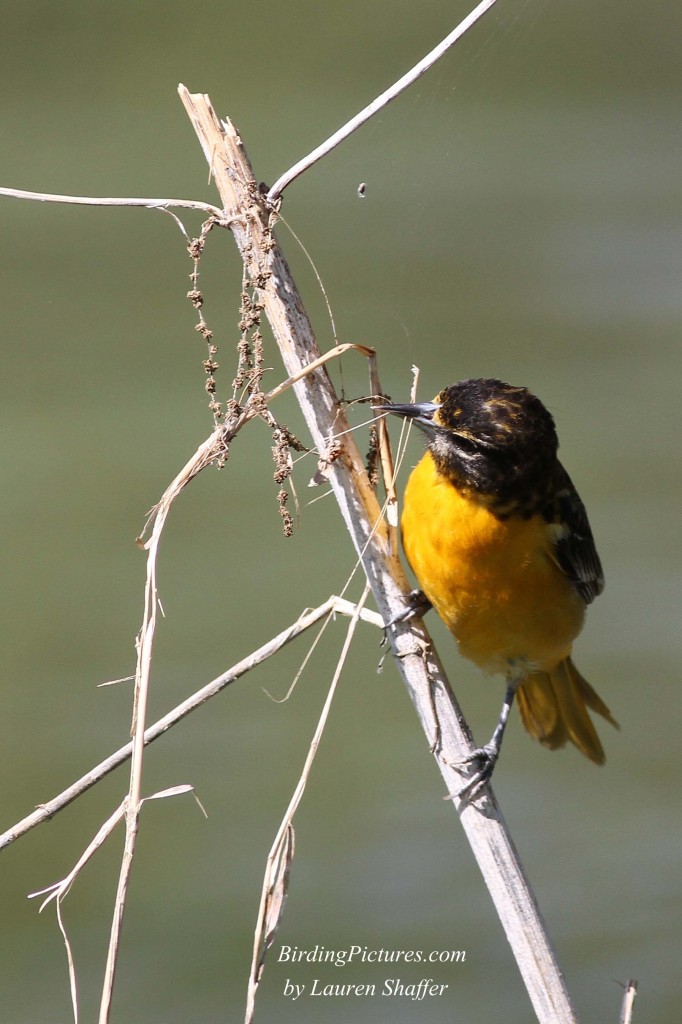 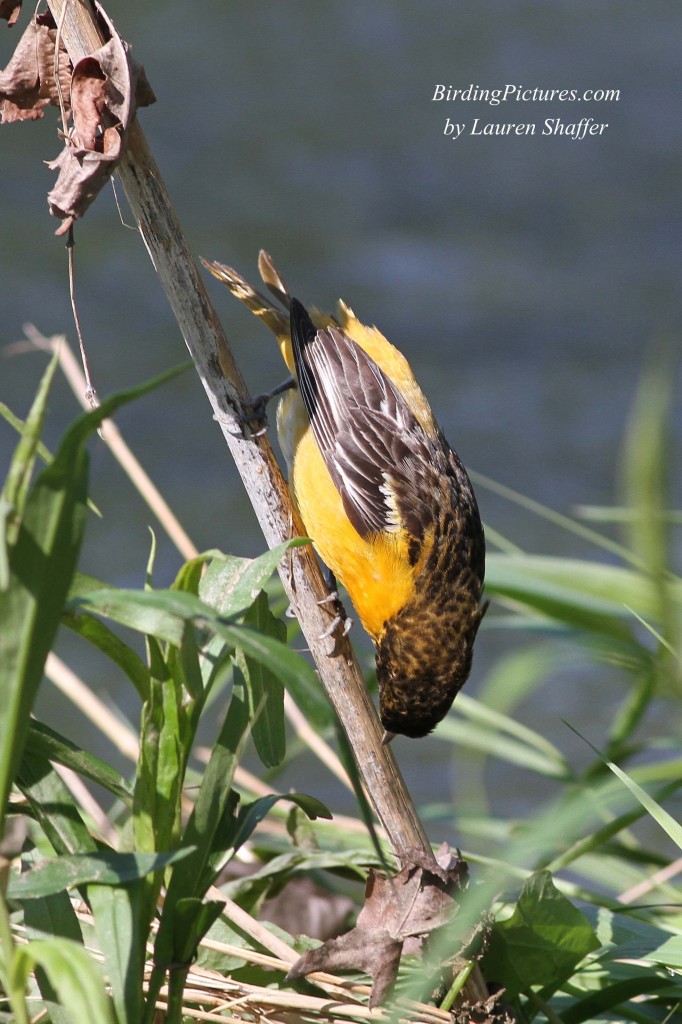 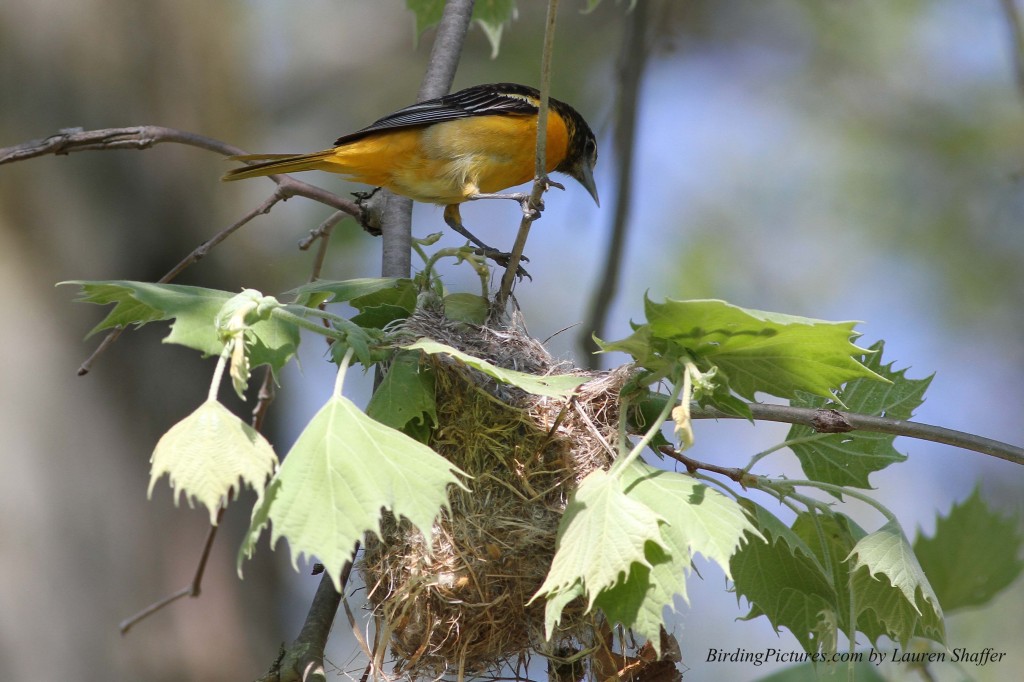 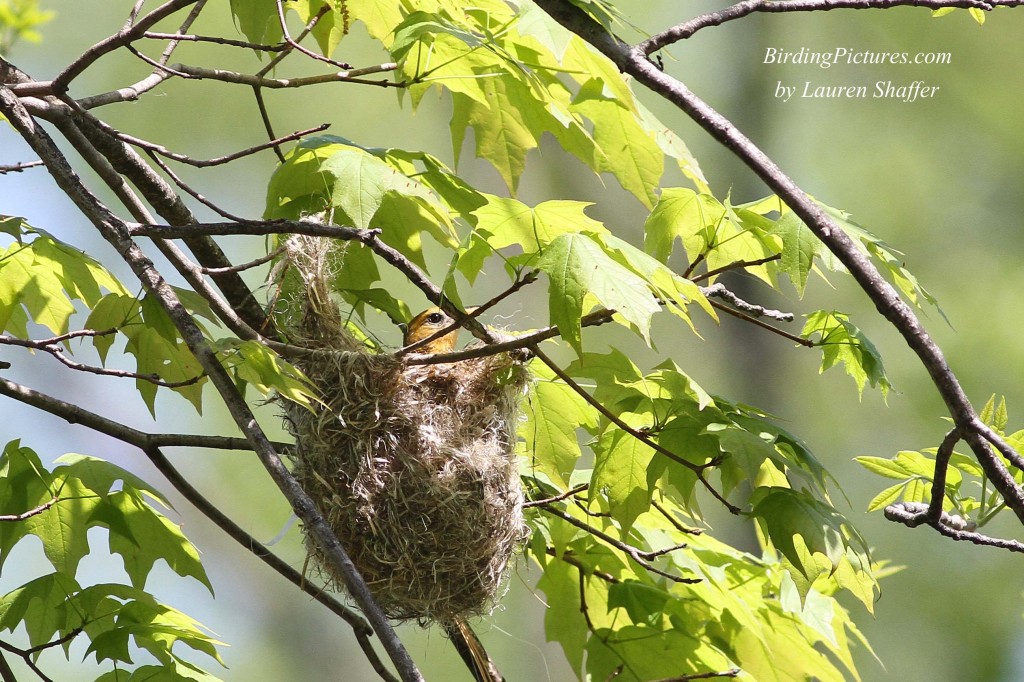 The bottom of our hill is always full of bird activity with the wonderful habitat created by a creek, pasture, and woods next to the road.  Yellow warblers abound, as well as song sparrows, brown thrashers, and an occasional Kestrel or Cooper’s hawk to stir things up.  The other day a Baltimore Oriole pair chose to set up housekeeping in the tall sycamore tree at the edge of the road and build a new nest. Unlike most bird pairs, both male and female sing, maintaining vocal contact with each other, and the males declaring their territory.  They are conspicuous with their bright orange garb, the male much more so than the female.

I felt so lucky to get in on seeing them building their Baltimore Oriole nest.  The female was busy in the field nearby, stripping plant material off dead stalks of milk weed, and the male, too, joined her in gathering nest material and weaving it into the nest.  This is contradictory to what the Stokes Guide to Bird Behavior says, but the pictures don’t lie.  Here is a liberated male Oriole who is obviously contributing to the housekeeping chores!  You can see what long strands of fibers he has in his beak which he attaches to the branch and loops underneath, creating a suspended woven sack about 8 inches in length.  When the oriole was busy inside, I could see the nest stretching this way and that, as he poked around tightening things up.

Orioles also love to use horse hair for their nests, and my dear birding friend who passed away last year at the age of 80, would put out gobs of horse hair, given to her by her daughter every Mother’s Day.  Ann said that “her” oriole would be waiting for it, and come down right next to her to pick it up every year.  If she was late, the Oriole would scold her while she was out gardening!