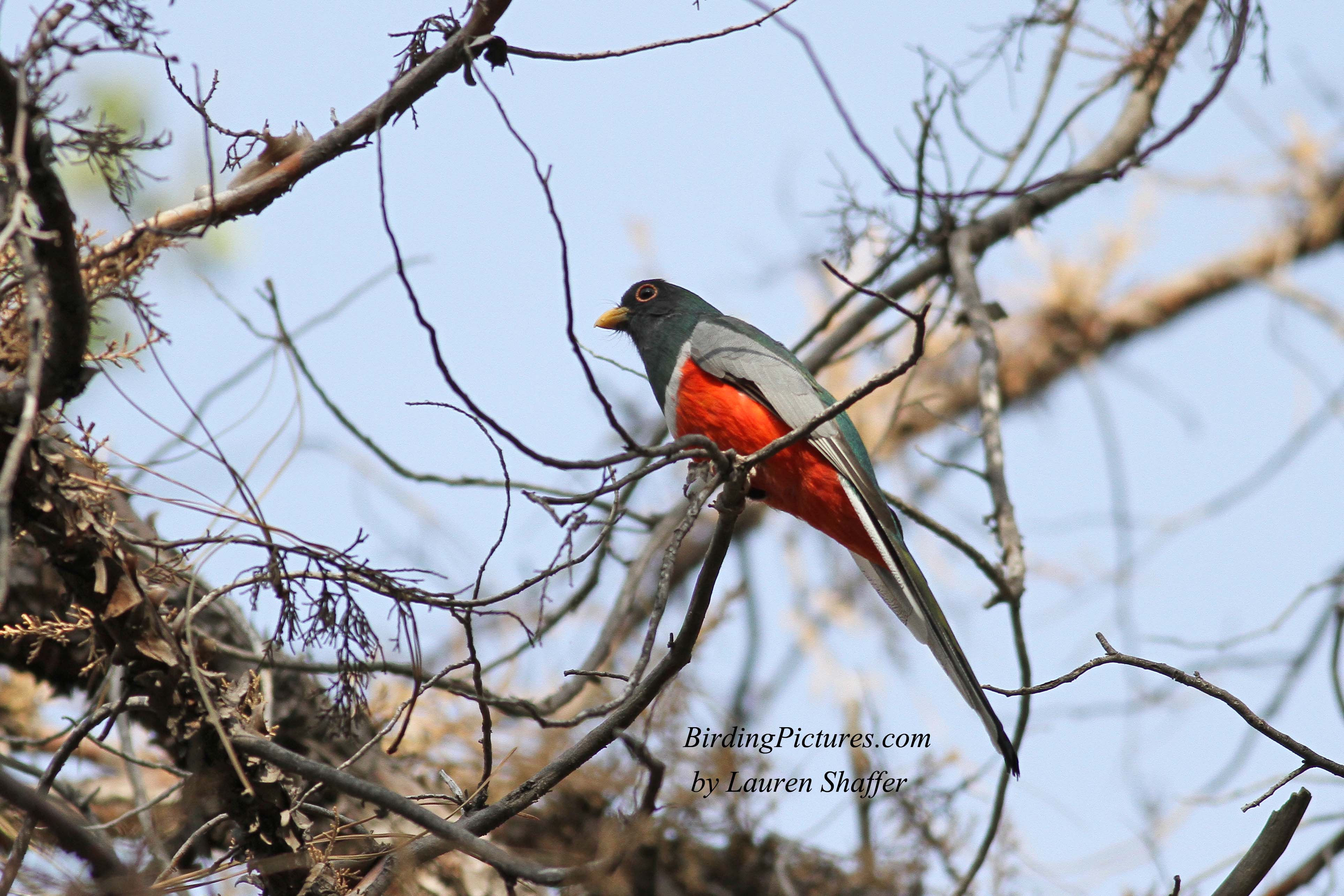 Elegant Trogons are supposed to be the highlight of any birding trip to southeast Arizona; that is, if you are lucky enough to see one!  They seemed to be late arriving at Cave Creek Canyon near our group’s home base of Portal, AZ. Only one pair had been seen in various places the week we were there;  sometimes at a sycamore tree in a dry creek bed near a trail crossing, and a couple of times flying through the campground.  My friend and I were with a Road Scholar birding group, and we had just 5 days to find our prize Elegant Trogons along with more than 100 other species.

On Day 2, we were told by a lucky photographer that the male had been seen along a trail at the second creek crossing. We quickly traipsed down the rocky trail in great anticipation!  When trogons are calling, it makes it much easier to find them.  Faint calls were coming from the distant hillside.  After looking for many minutes, we were rewarded with only a quick view of the distant female.  It took our poor guides much pointing and talking us through the correct branches on which to focus in order to lay bins on the bird. 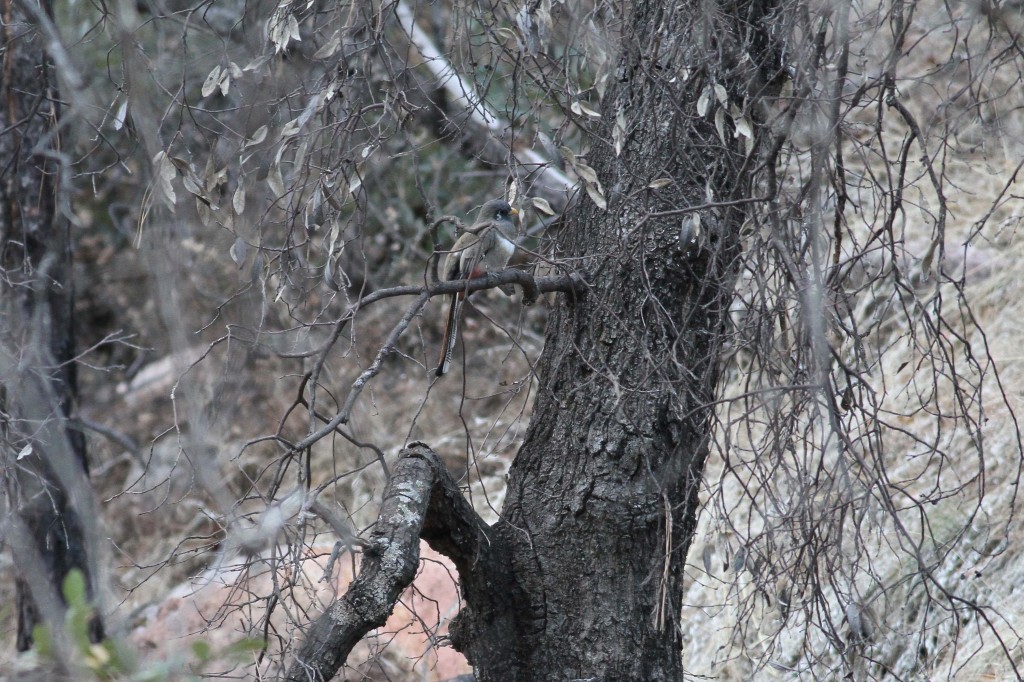 A quick peek at the elusive Female Elegant Trogon

Day Three was scheduled for birding other habitats, but the early morning of Day Four we got lucky!  We returned to the same area as before, and heard the male calling!  It was so close that I could only photograph it from just below the bird. That bright orangy-red is enough to knock your eyes out!  And the red ring around the male Elegant Trogon’s eye is quite dramatic.  The bird (or birds) flew further down the canyon, but our guide had us wait there in case they returned. 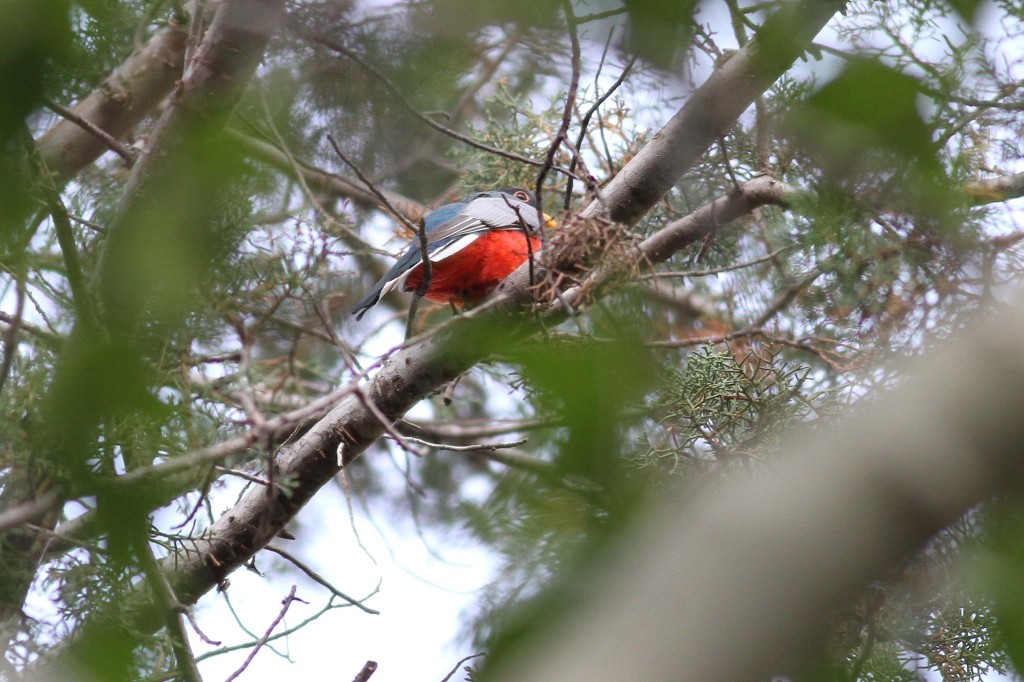 Sure enough, his calls became a little louder, and finally after 20 minutes, the bird returned to the sycamore tree in the dry creek bed which it had frequented before.  The male entered a large hole and stayed inside for at least 10 minutes, talking softly to the female which was nearby.  Finally, he stuck his head out, as if to encourage her to at least act interested! 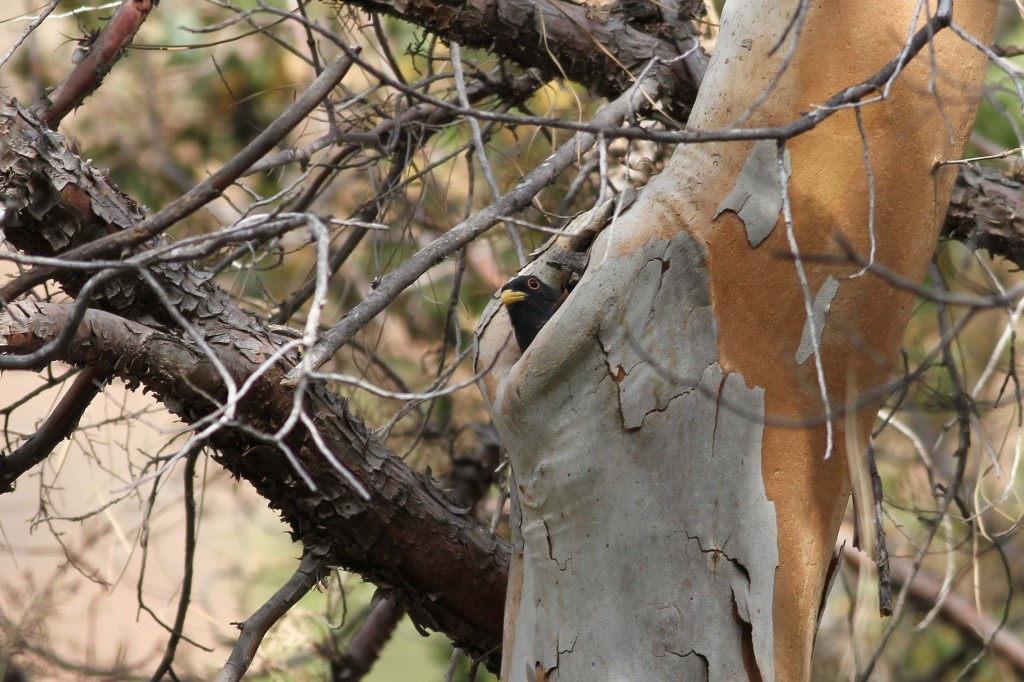 Come on, Honey. Won’t you please have a look?

Suddenly, he exploded out of the hole and perched nearby. 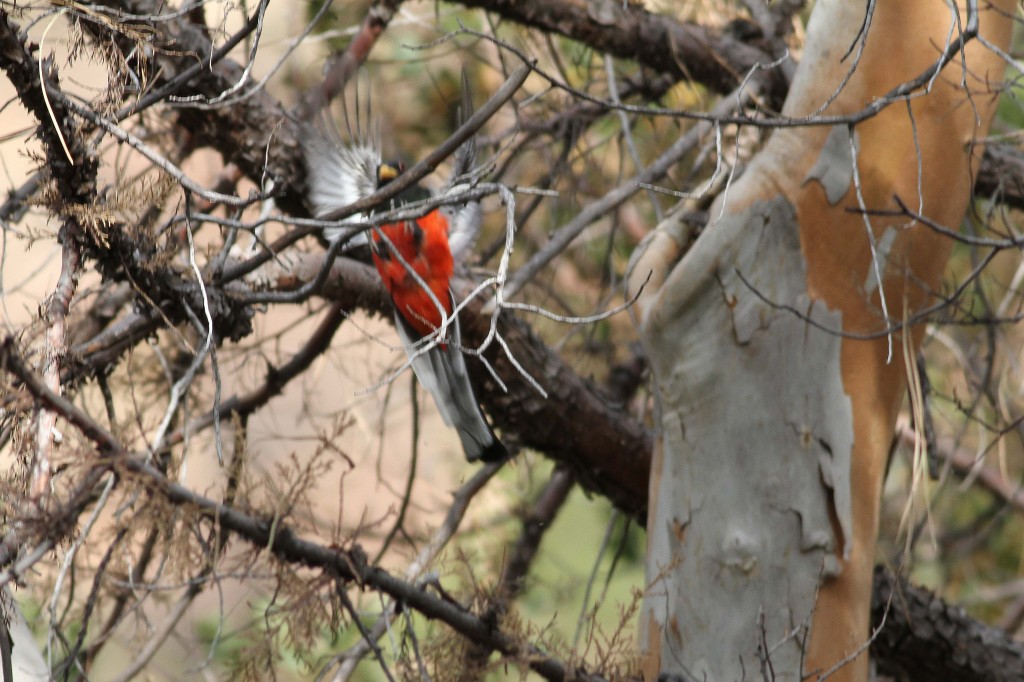 He makes a quick exit, and continues to call for her. 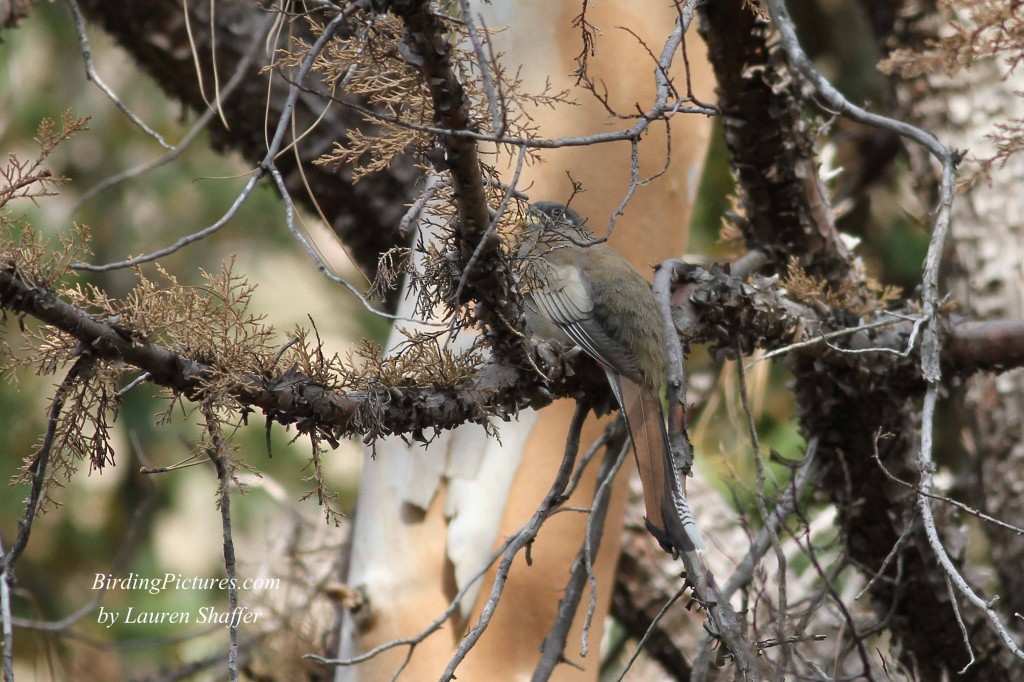 Playing hard to get! 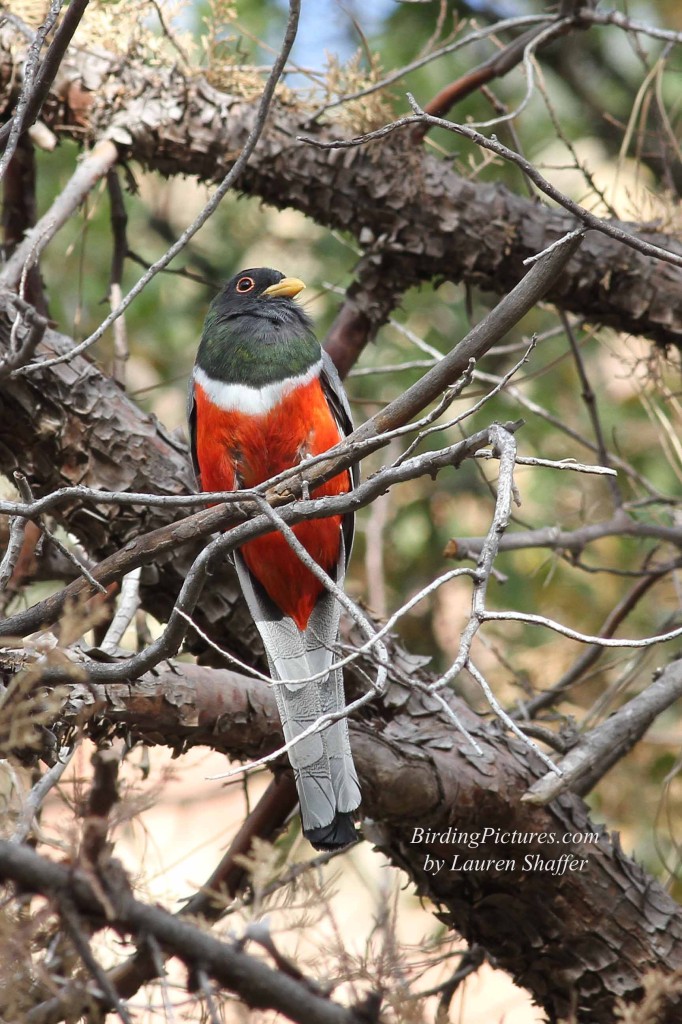 She sure is picky! Hope she likes this one!

After sitting pretty for awhile, the female finally perches at the nest hole and looks in. Hopefully she gave the nod to her mate so they can get started with their nesting!  What an incredible experience, made all the more special because it took some patient effort to achieve some good looks. 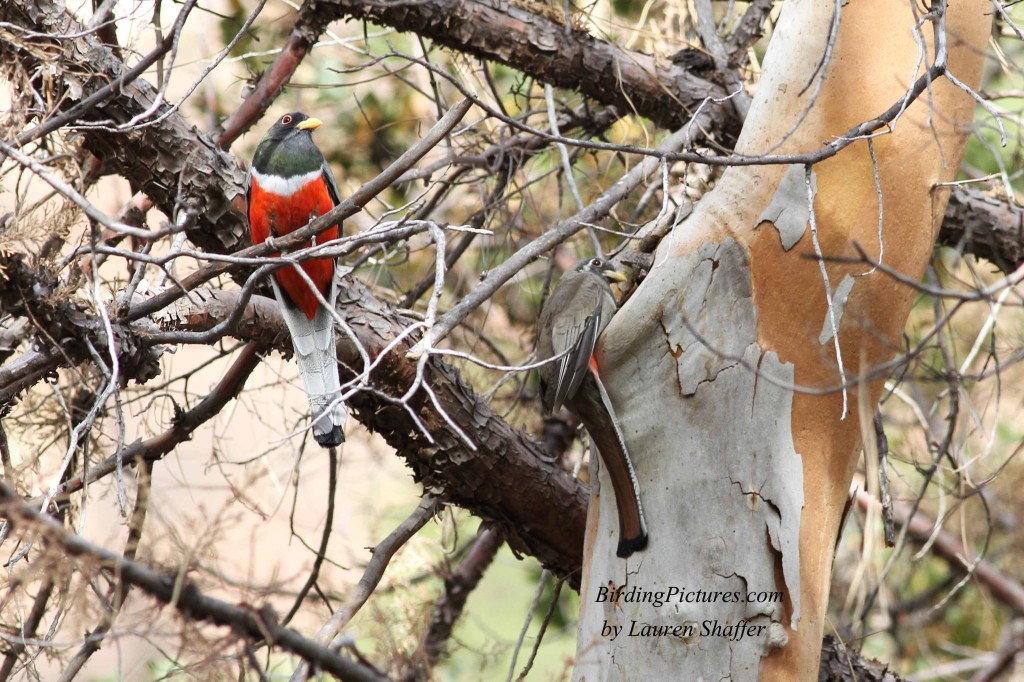 FINALLY! She comes in to take a look at her (hopefully) new abode!

According to allaboutbirds.org, trogons will also explode into flight when going after insect prey, such as grasshoppers, caterpillars, dragonflies, and bees.  They also eat a variety of fruit and berries.

This species was formerly known as Coppery-tailed Trogon because of the female’s rusty tail feathers. She also sports a white spot behind her eye.  From beak to tail the Elegant Trogon is only about a foot long, just larger than a robin!  It can be found in only 4 canyons in southeast Arizona as well as in Mexico.

For more information on birding trips with Road Scholar, see their website here.  They generally have groups limited to 14 individuals, incredible guides, non-stop birding, and great prices with everything included except the airfare to get there.