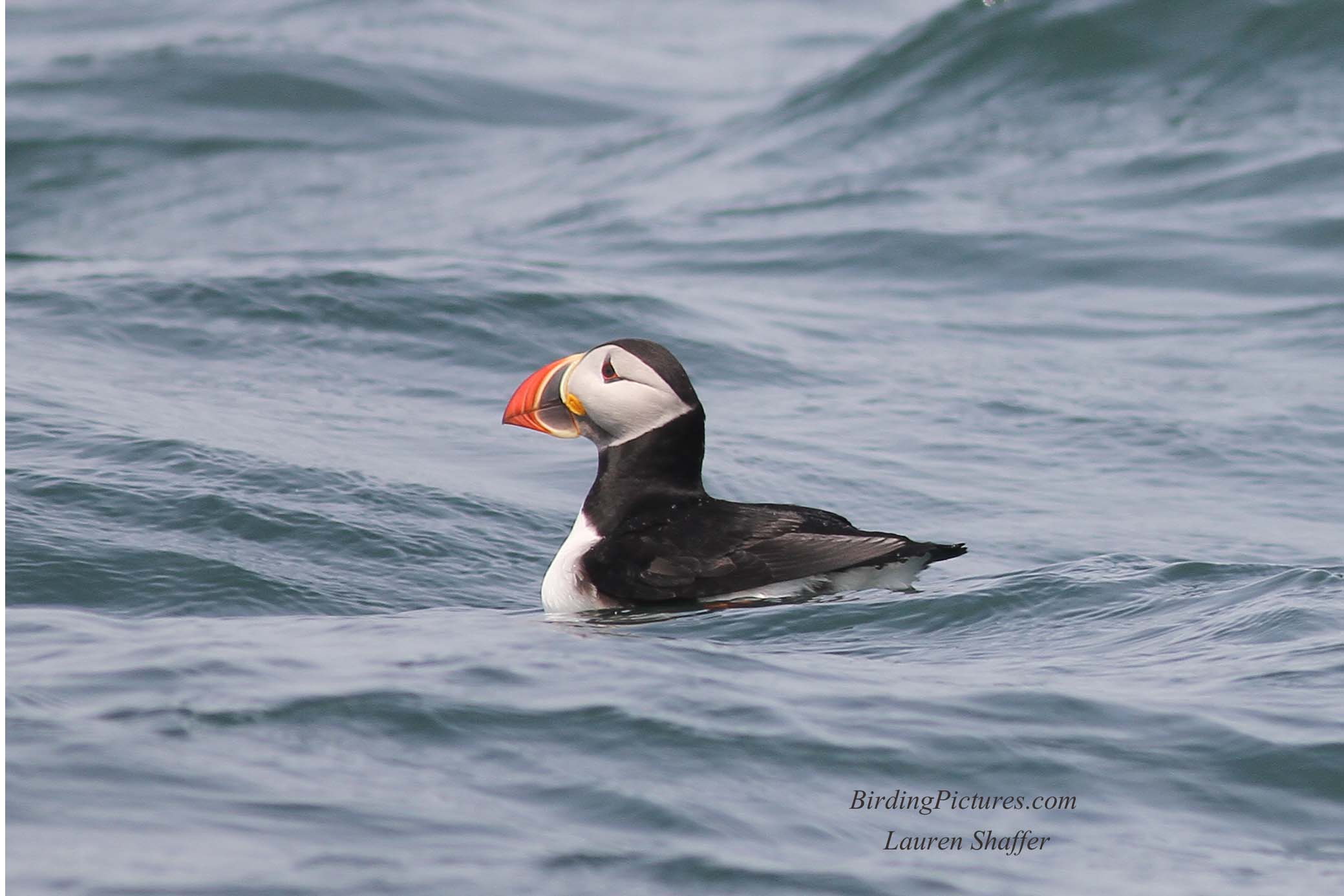 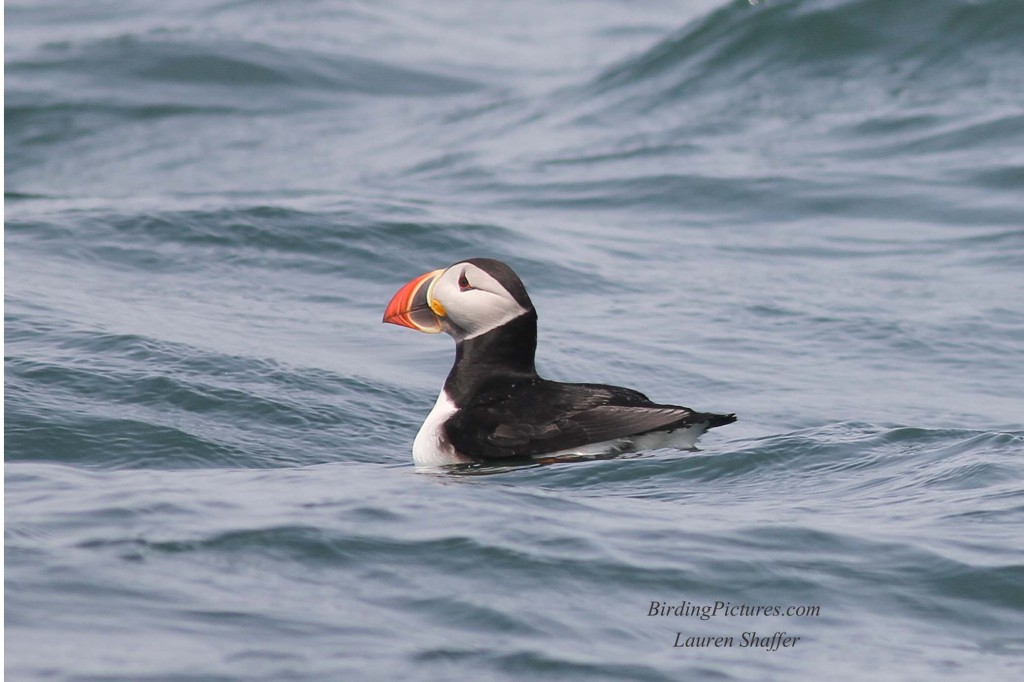 Seeing Atlantic Puffins was the principle reason for wanting to go birding in Maine this Spring. Getting there by boat can be iffy, depending on the fog and the wind. When the seas are too rough to land on Machias Seal Island, one of three islands where Puffins nest, they can at least be observed from a rocking boat.

My friends and I were on a Road Scholar trip called “Chickadees, Grouse, Puffins and More: A Birder’s Dream in Down East Maine.” Of course we hoped for getting our bins on Spruce Grouse (didn’t happen) and Boreal Chickadee (barely happened), but the brightly colored clown-like Atlantic Puffins were the prize of the trip.

Reservations had been made by Road Scholar with Captain Andy Patterson’s Bold Coast Charter Company out of Cutler Harbor. The seas were too rough to go out the day we were scheduled, and another date was chosen for two days later. It was a beautiful sunny day, but the waves were swelling to 4-5 feet. Our hopes for making a landing and being able to take turns observing the Puffins from a bird blind were dashed, but we were still able to get good looks from the boat. Captain Patterson was a character, very animatedly telling us all about the island on the way, which kept our minds off our queasy stomachs.

Machias Seal Island is a small (15 acres), low-lying rocky offshore island situated nine miles from Cutler, the closest point of departure on the mainland. The island is designated a bird sanctuary by the U.S. and Canadian Wildlife Service, and is also the site of a manned light station, maintained by the Canadian Coast Guard. Ownership of the island has been under dispute for many years, with both the United States and Canadian governments claiming sovereignty.

Each year, the island becomes the summer nesting home for a great number and variety of migratory seabirds including Atlantic Puffins, Razorbills, Common Murres and Arctic Terns. Other species which are present during the summer months are Common Terns, Black Guillemots and Common Eiders. 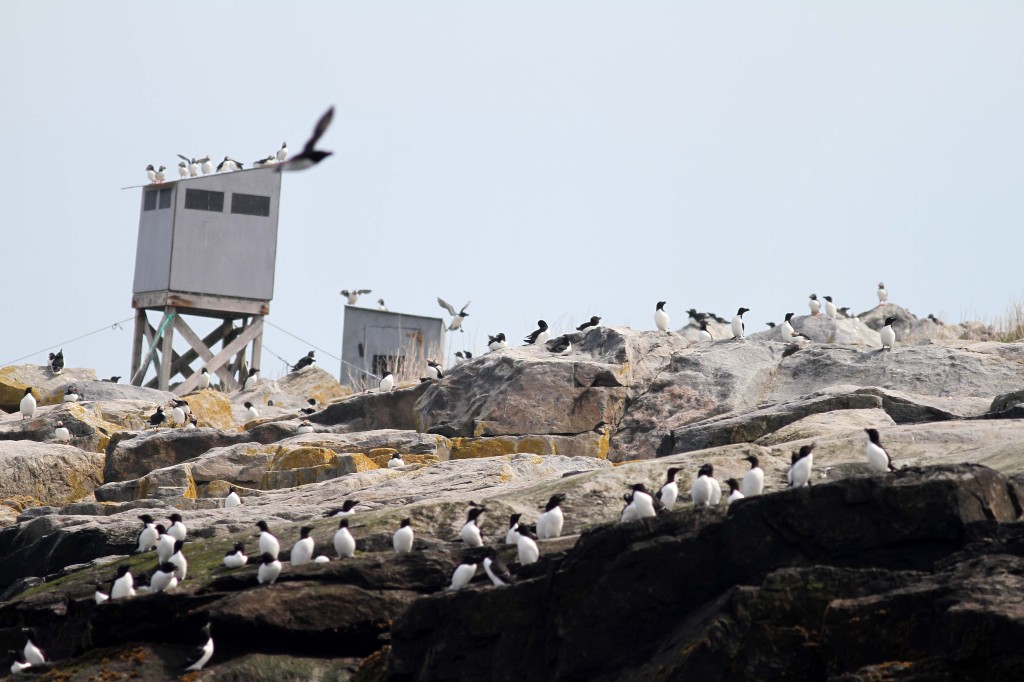 Those lucky enough to actually land on the island and take turns in the small bird blinds will experience Puffins walking around on the roof, and birds so close that they won’t fit in the frame with a large lens. How I wish we could have experienced that, but am grateful for the clear views that we did get. The Atlantic Puffins in the shot below show a Razorbill, another alcid, behind them. 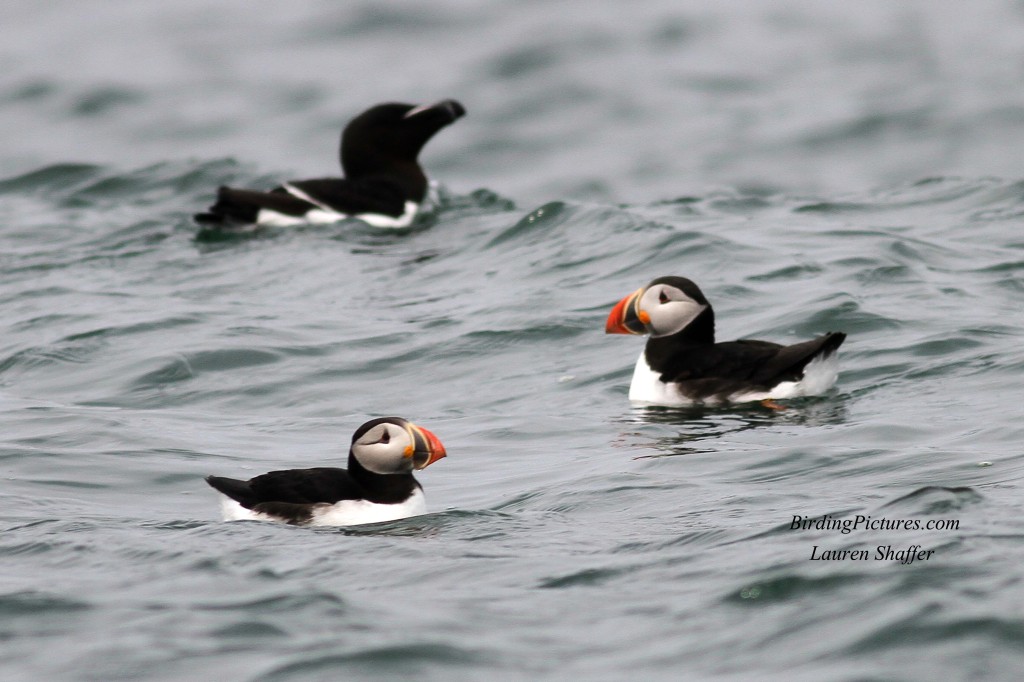 I have to admit, this was the most challenging photography I have ever done. The boat was small, filled to capacity with 15 people, the waves were high, and the boat kept turning around to give people on both sides a chance to see the birds well. There was no chance to get one’s sea legs, which is possible on a large pelagic cruise with no islands to circumvent. The only thing to do is to take over a thousand shots and hope that a few of them come out focused! I feel very fortunate to have come up with a few photos to post here. 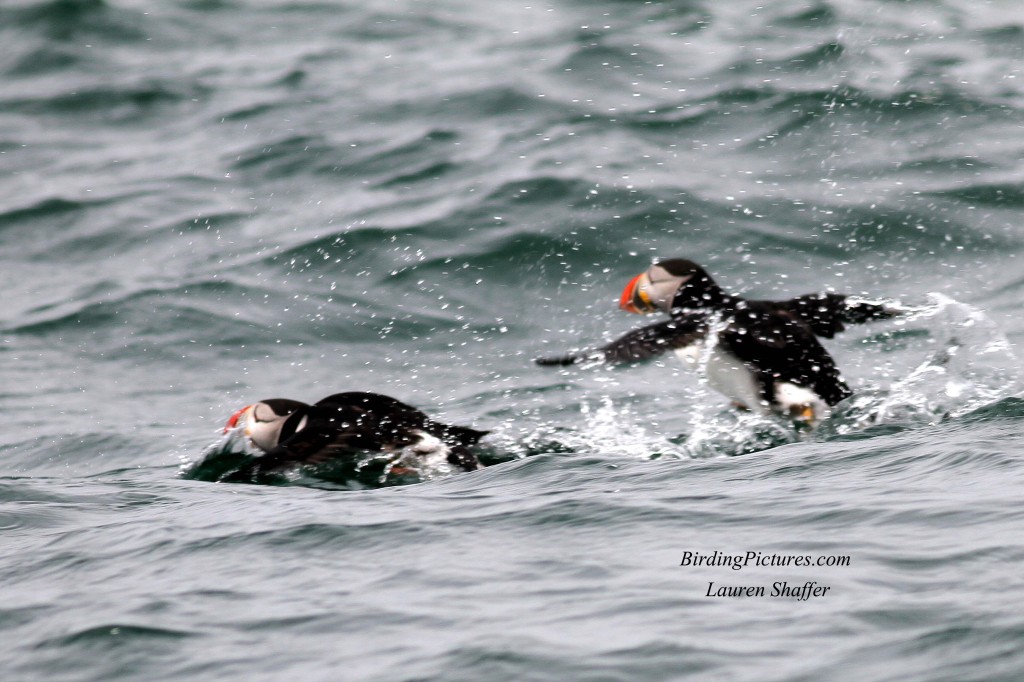 It takes a bit of effort for Puffins to get air borne. They have such plump bodies and large heads, but very slender wings, that they need to skitter over the water with feet slapping the surface and wings flapping mightily before getting clearance!  I loved seeing the red feet stick out sideways when taking flight! 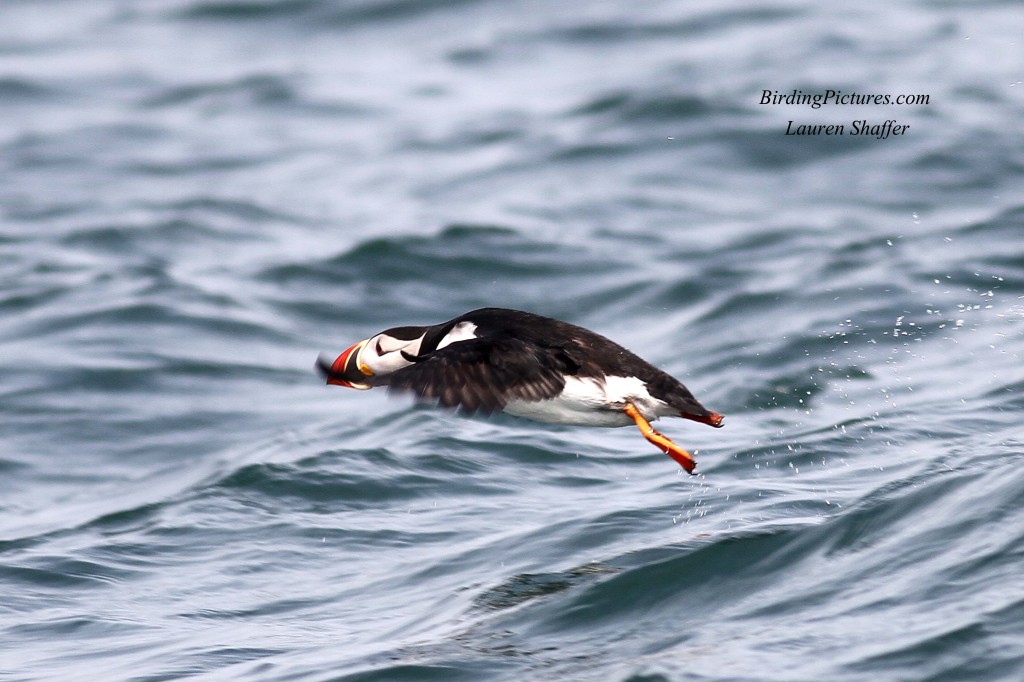 Whew!! He made it! Just to give perspective on how small these birds are, notice the size of the researcher on the island compared to the Common Murres, Razorbills, and a few Atlantic Puffins flying overhead. Puffins are only about a foot tall, with a wingspan of 21 inches. They nest in burrows among the rocks. The researcher below has a fist full of flags that I assume she may use to mark the burrows being used by nesting Puffins. 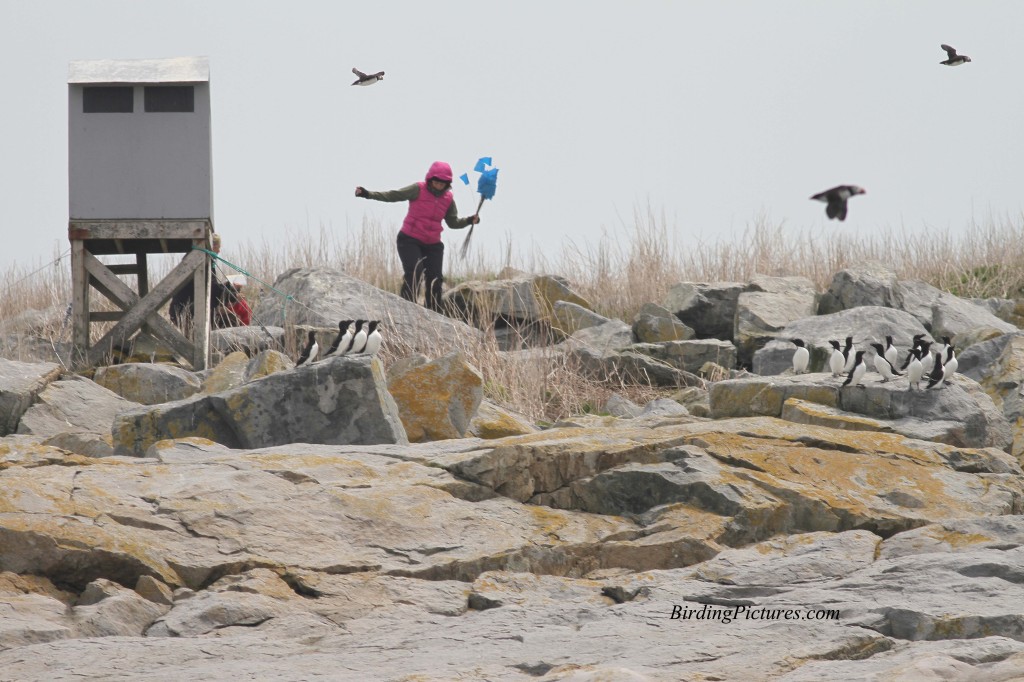 I took a short video of what happened when these two people appeared and hundreds of birds took flight. Hopefully you will not get seasick watching the video, and will begin to appreciate how difficult it was to be able to focus on a single bird while the boat was constantly dipping and rising in the ocean! Thank goodness for the patch behind the ear, and the skill of Captain Andy Patterson!

Check out the video https://youtu.be/YmTs6fvoFHw