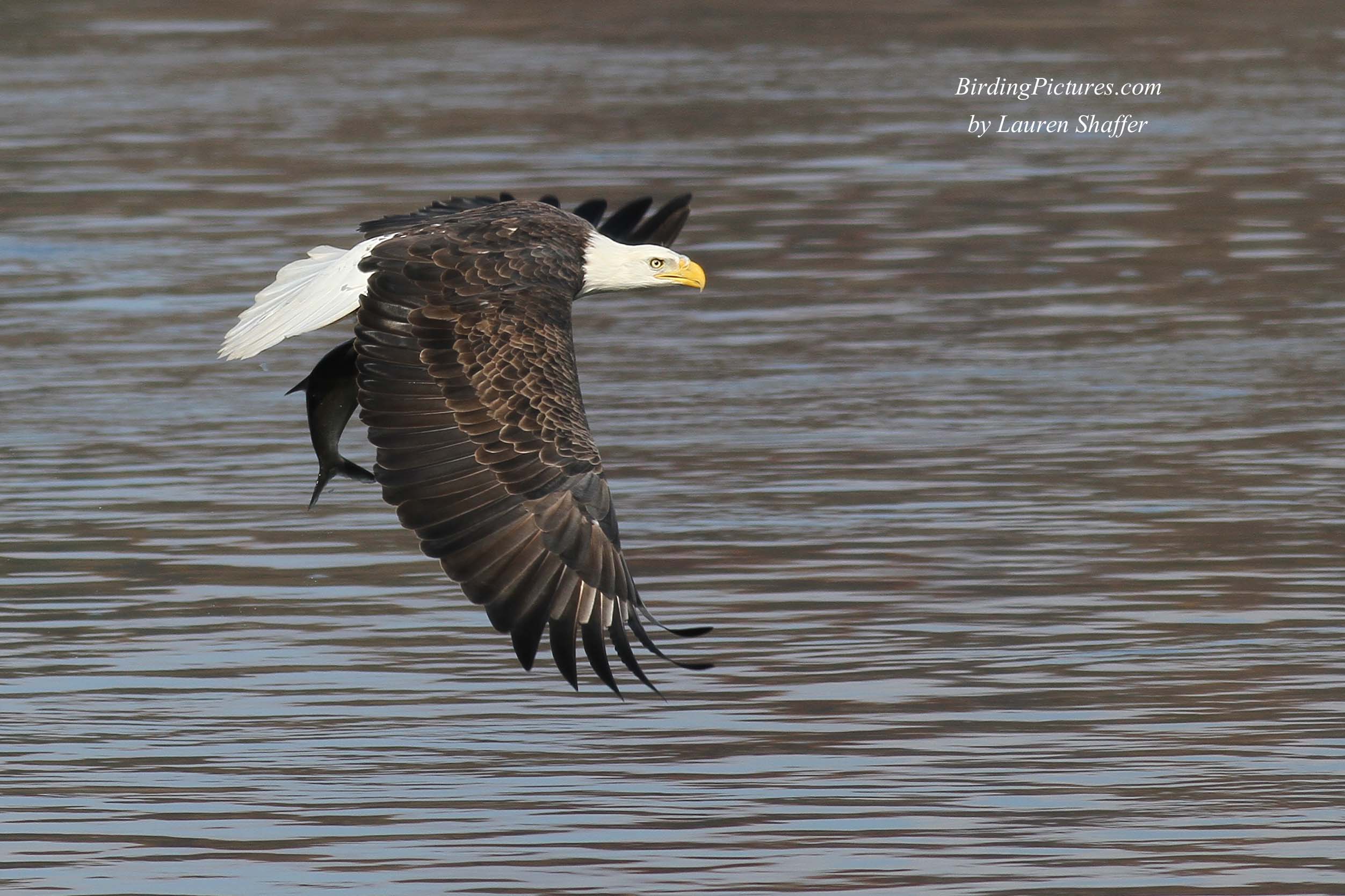 Photographing Bald Eagles at Conowingo Dam along the Susquehanna River in Maryland, has to be one of the most thrilling experiences of a photographer’s life. At least it is, if the eagles are there! There are no guarantees that they will show up in big numbers, or that they will be active for more than a few minutes every hour or two, but when conditions are right, the sound of thousands of camera shutters going off continuously can really raise one’s adrenaline! From early November to the end of December is the best time to go.

When power is needed, the hydroelectric plant releases water along with fish and eels which get churned up and spit out at the base of the dam. Some are stunned and lay near the surface which makes for easy pickin’s for the eagles, cormorants, and Great Blue Herons. Hundreds of Rock doves, Black Vultures, and Gulls are usually present also, along with a Peregrine Falcon or some other raptor that makes a brief appearance.

When water is released, an alarm sounds and the level of the river rises. Fishermen and photographers who choose to be at the water’s edge can quickly find themselves getting wet feet. It’s a great spot for getting close to your subject though, when an eagle hits the water and comes up with a huge fish! 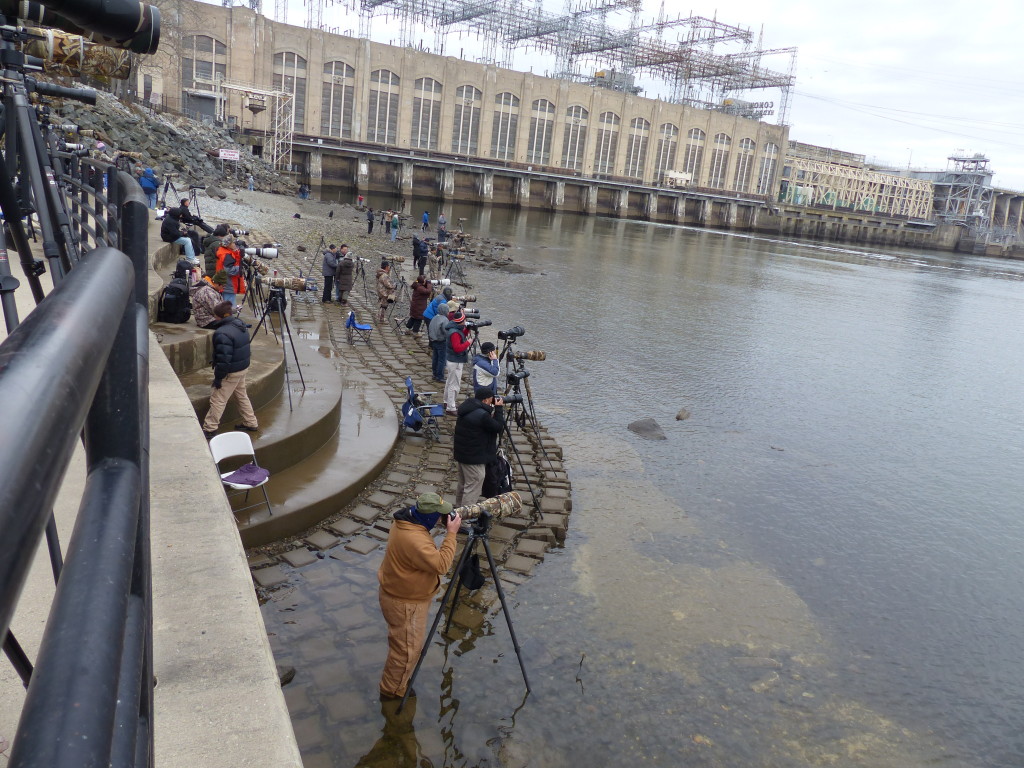 Many prefer to be up on the fishermen’s pier, a beautiful new concrete pad with wide steps to accommodate many people. It’s strange to be standing next to a fisherman casting his line, while trying to manage a big camera on a tripod, but everyone gets along and photographers are in the majority on the upper pier. Higher up and further down where there is a lot of action down stream, tripods with monster lenses line the fence by the road. People are friendly and when there is little action, it becomes a block party! Business cards are exchanged, a book on eagles is peddled, friendly barbs are exchanged, and invitations to go birding together are extended. 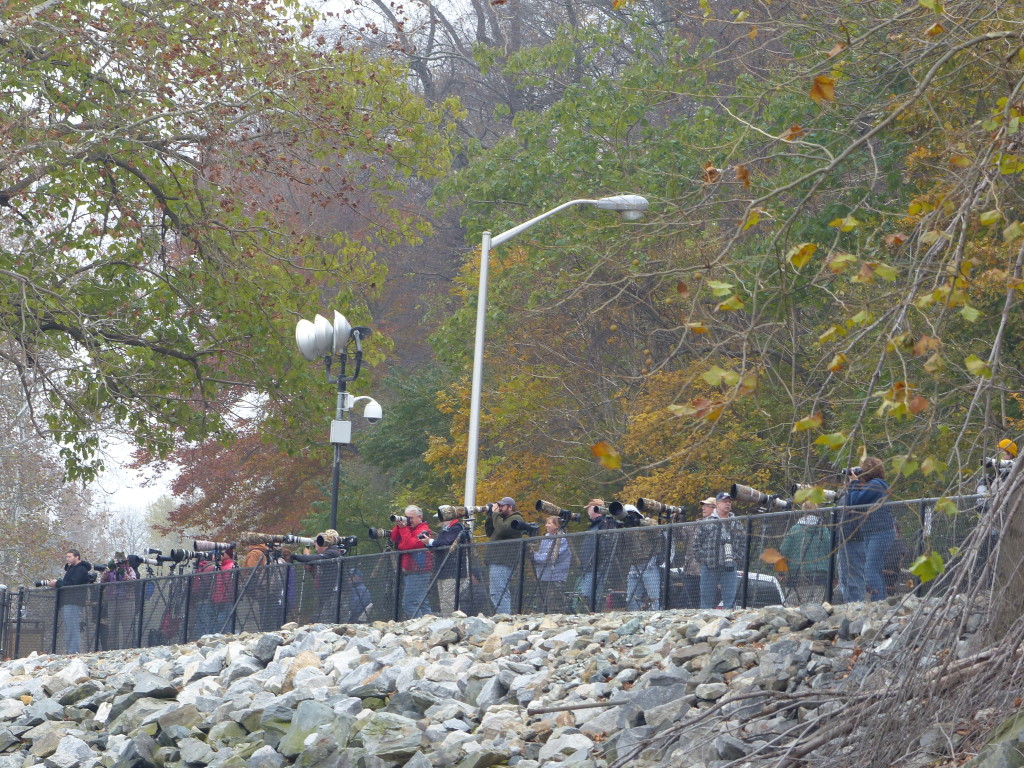 It takes a Bald Eagle 4-5 years to become mature with a completely white head and tail with no white splotches on wings or body. Most of the eagles here were in between juvenile and mature. The eagle below is probably a 4th year bird which has donned most of its white head and tail feathers. 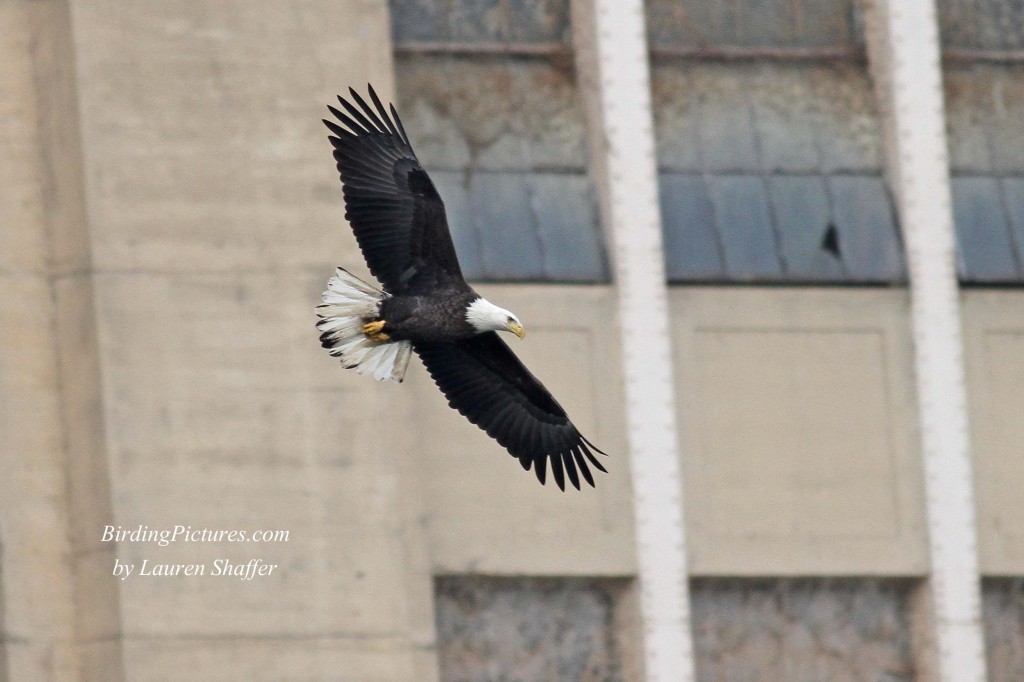 Here a mature bird chases an almost mature bird, while a Great Blue Heron looks on. 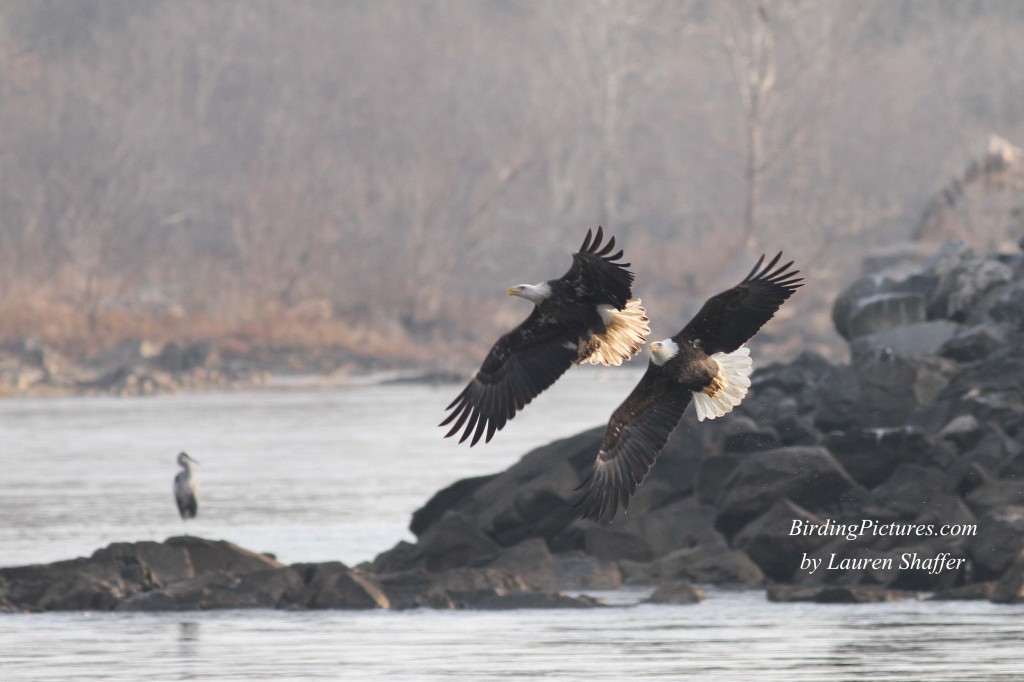 This eagle is in its “ugly duckling” stage, where it has a mostly white head but splotchy dark tail and wings. It’s experienced enough to know how to use those powerful talons though! 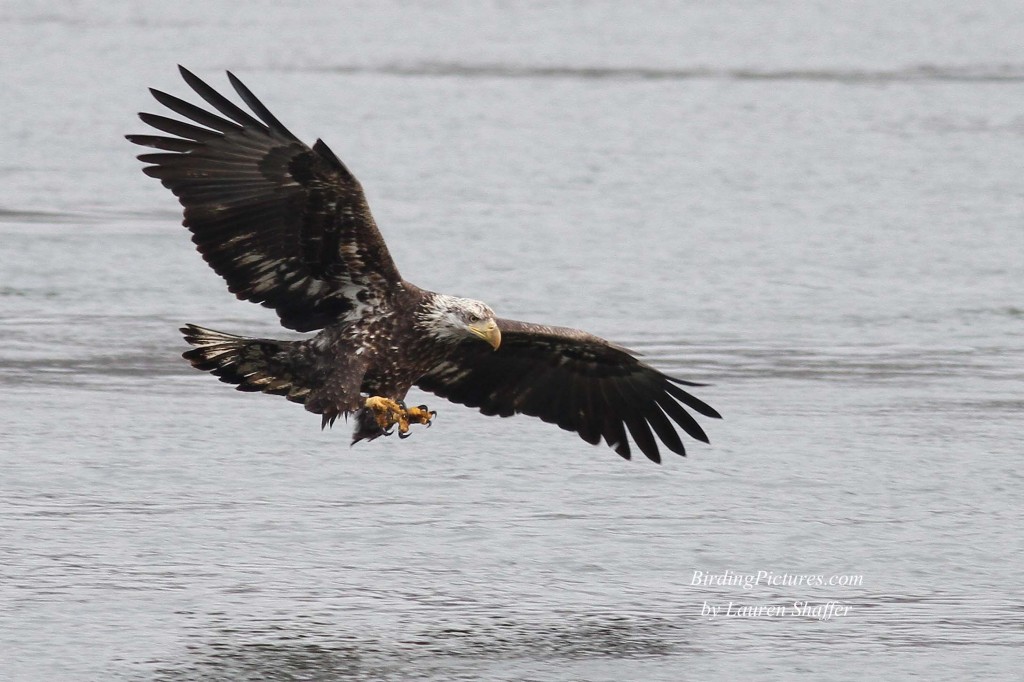 It is amazing to watch how an eagle can put the brakes on by raising different layers of feathers. This shot from behind shows a successful catch and primary feathers curled up at the end like long fingers! 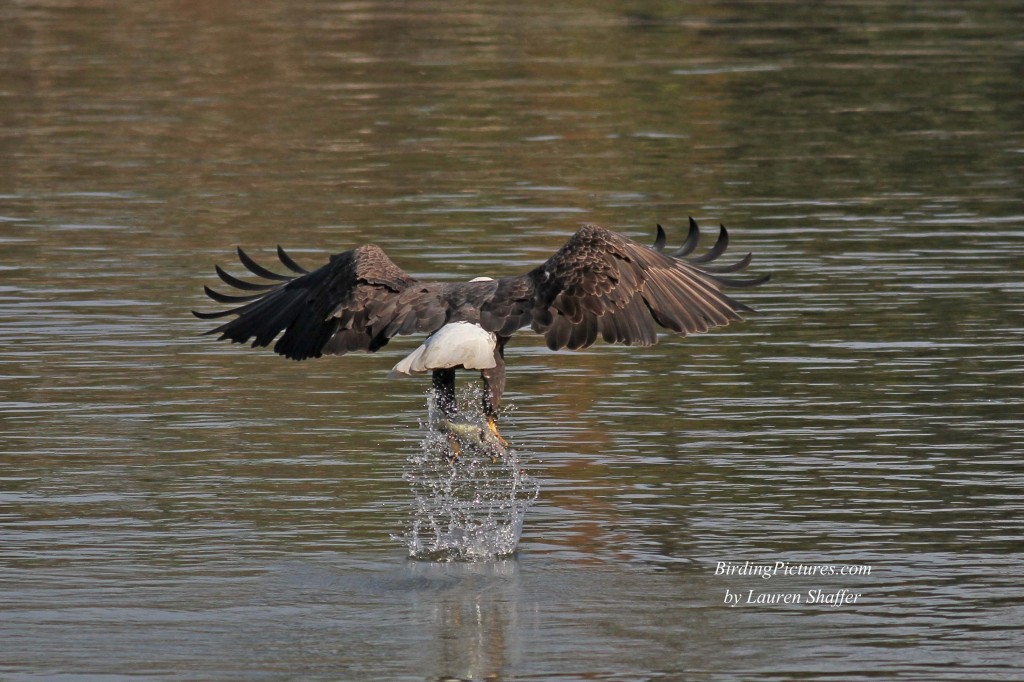 On this day, we all witnessed the eagles catching very small fish, maybe just a few inches long. Many times they would eat them while taking off, or still low over the water. 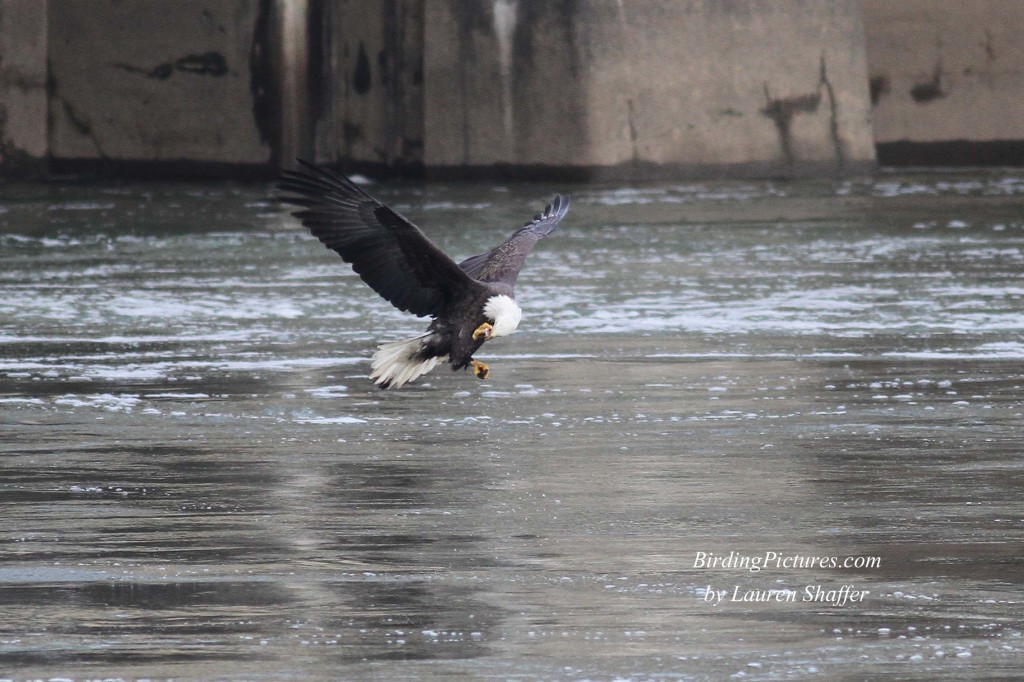 This is a scene from November 30 with many eagles and herons sitting on the rocks, occasionally becoming active at the same time. 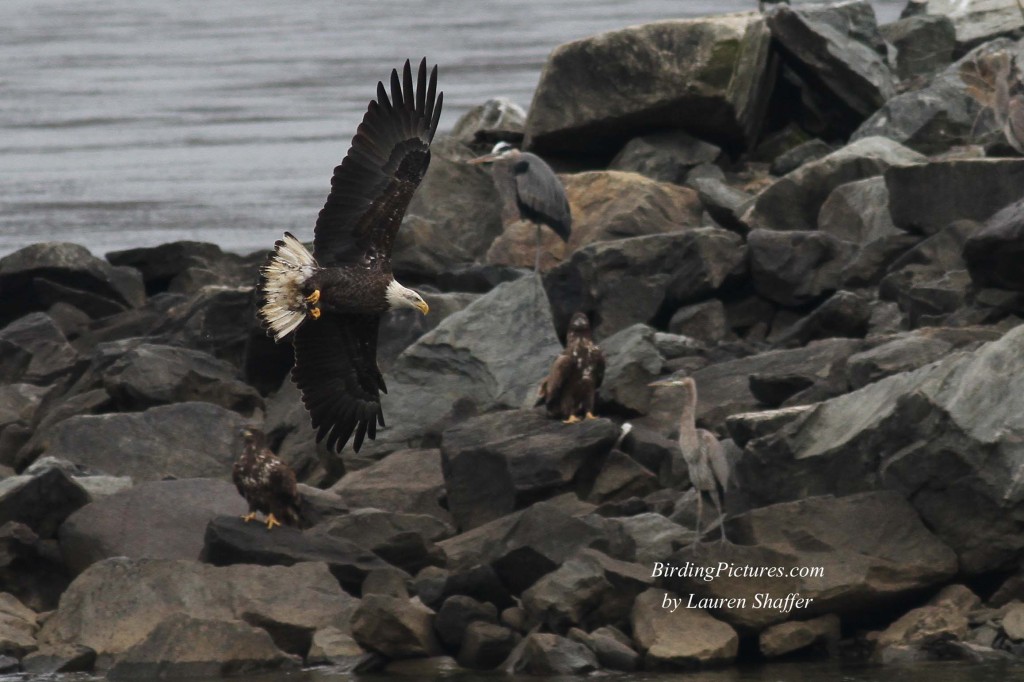 After following one eagle for a few moments, another would cross paths, and I would find myself refocusing on another, and then another! For 15 minutes, the constant action continued with seasoned photographers muttering, I’ve never seen anything like this before! The constant clicking of cameras sounded like rain! People complained of their hands cramping up, but then everything settled down to almost no action again for another hour. Unbelievably it all started again for another 10 minutes! Exhilarating! 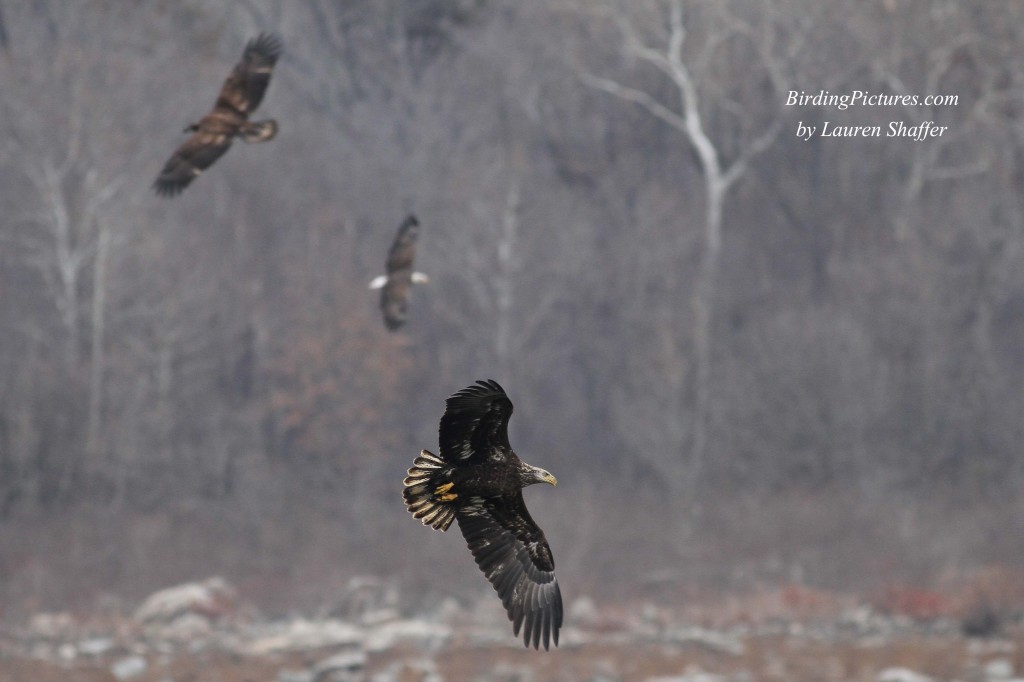 Eagles would rather fight than fish sometimes! It’s amazing to watch them harass each other, even linking talons and tumbling through the air, finally letting go before they hit the water. 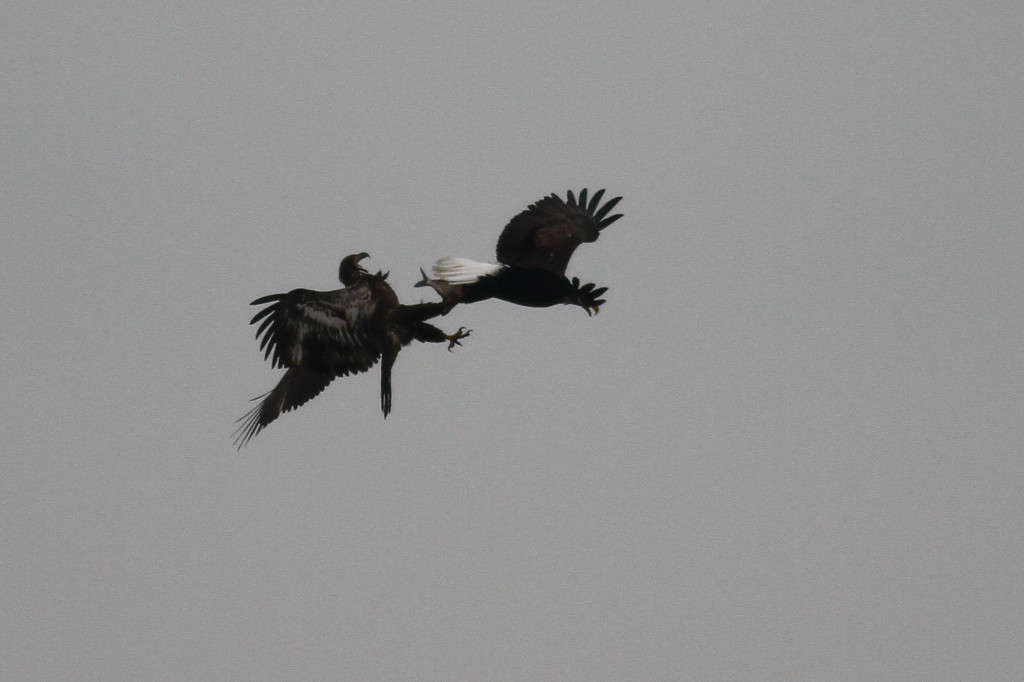 Going into a dive! 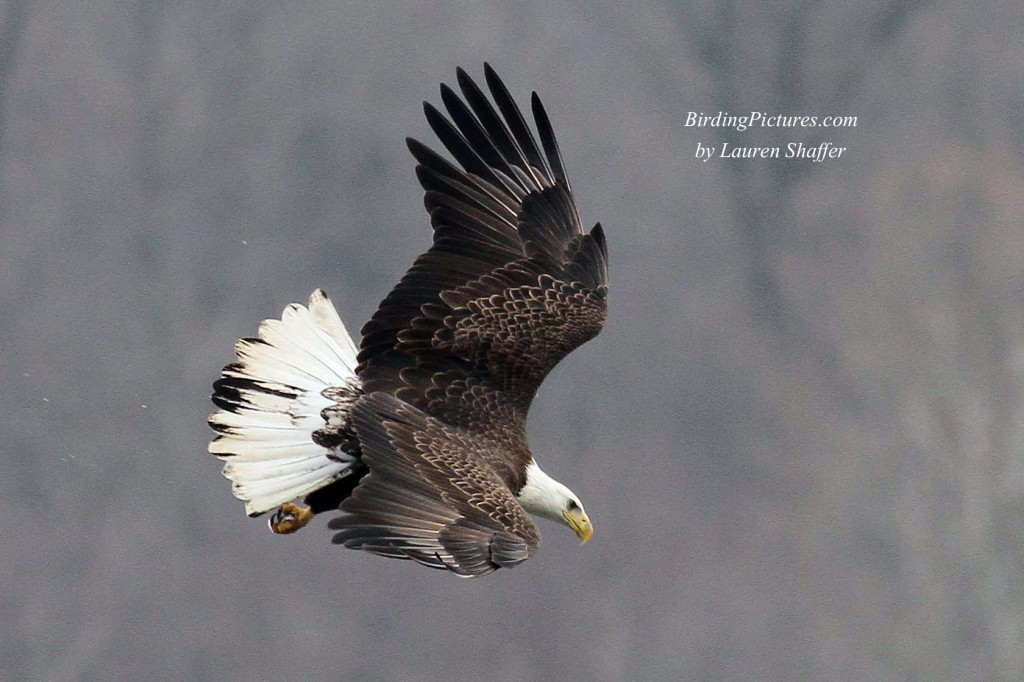 The sun actually came out for a few minutes. Blue sky is always nice! 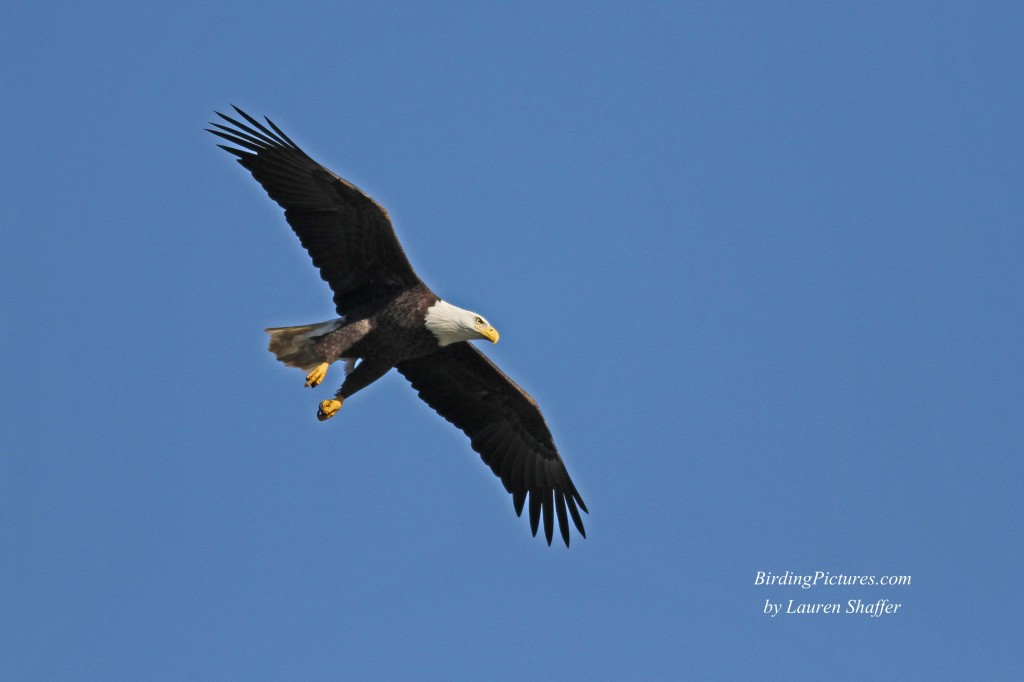 Now that is an intense look! 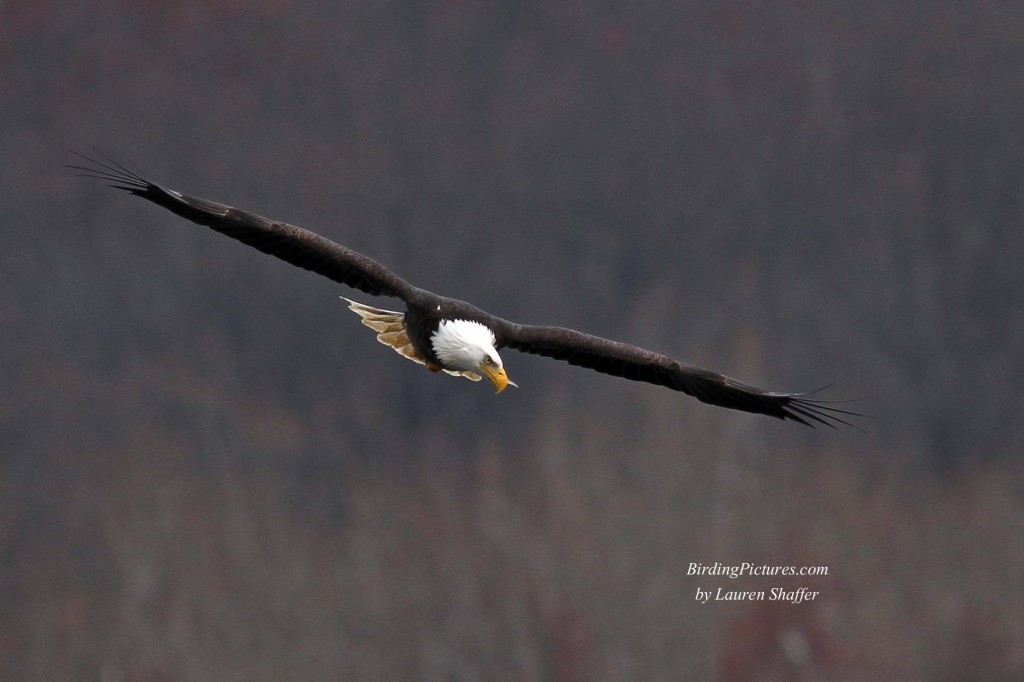 Many times I observed Great Blue Herons flying in to the water, briefly floating, and grabbing a fish or an eel and taking off with it. I had never witnessed this before, but perhaps it’s because the fish are stunned and floating near the surface. 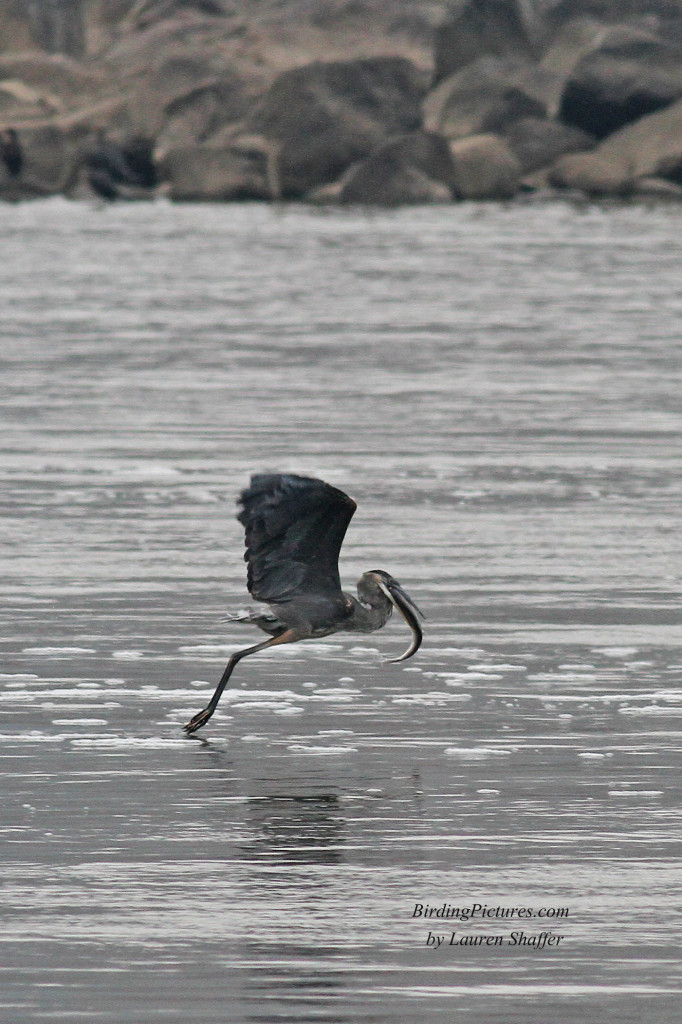 On our way back to the car, this juvenile eagle sat in a tree above the parking lot. He is brown all over with a dark beak, but still looking very regal! 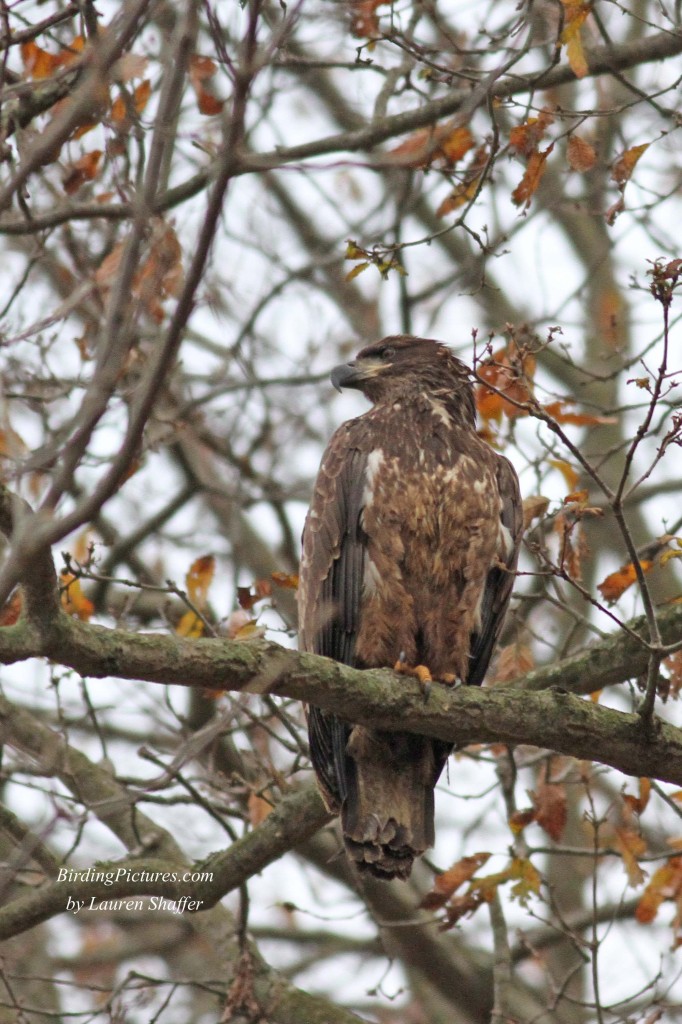 Emily Carter Mitchell has posted a wonderful Visitor’s Guide to the Bald Eagles at Conowingo Dam in her blog, if you are interested in going. If the eagles are there, you won’t be disappointed!