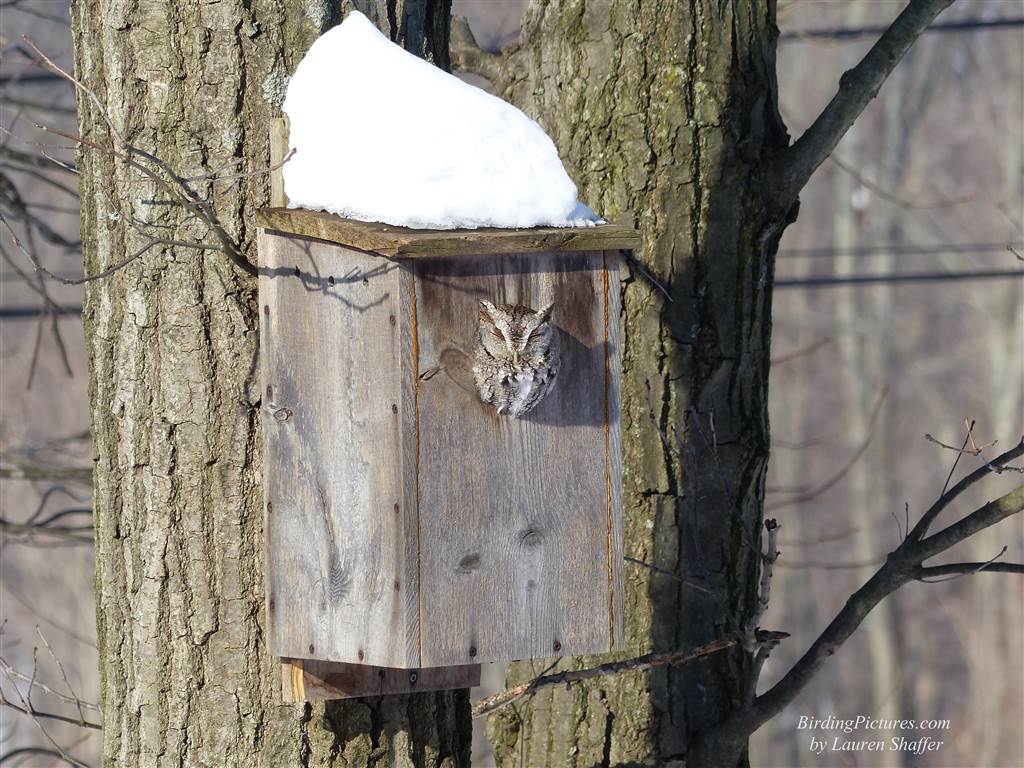 Seven or eight years ago, we put up four Eastern Screech Owl boxes all around our house, hoping a pair would choose one and nest in our wooded yard.  We followed the specs found on the Audubon page by Kenn Kaufman, and were very excited to have owls sporadically roosting in one of the boxes, and then nesting a few summers ago.  Of course the squirrels have claimed one of the boxes, and have raised many more offspring than the owls, but they are entertaining also.  This fall, this little guy, only 6-9 inches long,  began roosting in the box in our front yard.  He is a gray-phase, rather than the less commonly seen red-phase screech owl, and is well-camouflaged against the tree bark.

Unlike the owls of previous years, he is not at all timid, and will roost in the opening of the box in spite of cars going up and down the road behind him, our garage door opening, and the dog going outside for some exercise.  He even watched me decorate the front porch for Christmas!  He pays no attention to the songbirds that harass him, and last night he continued to vocalize loudly in the back yard while the dog was taken out for a midnight walk.

A previous blog post shows the local bluebirds and nuthatches fussing over the screech owl roosting inside.  Blue jays are our most vocal protesters, and are heard almost daily chastising the owl inside.

Yesterday, I was able to videotape him through the window while he looked around early in the rainy morning, and I caught him dropping down into the box for the day.  If you look closely at the picture above, you can see his little talons hanging on to the opening of the box.  Near the end of the video, he turned, and hopped down into the bottom of the box showing part of his wing.