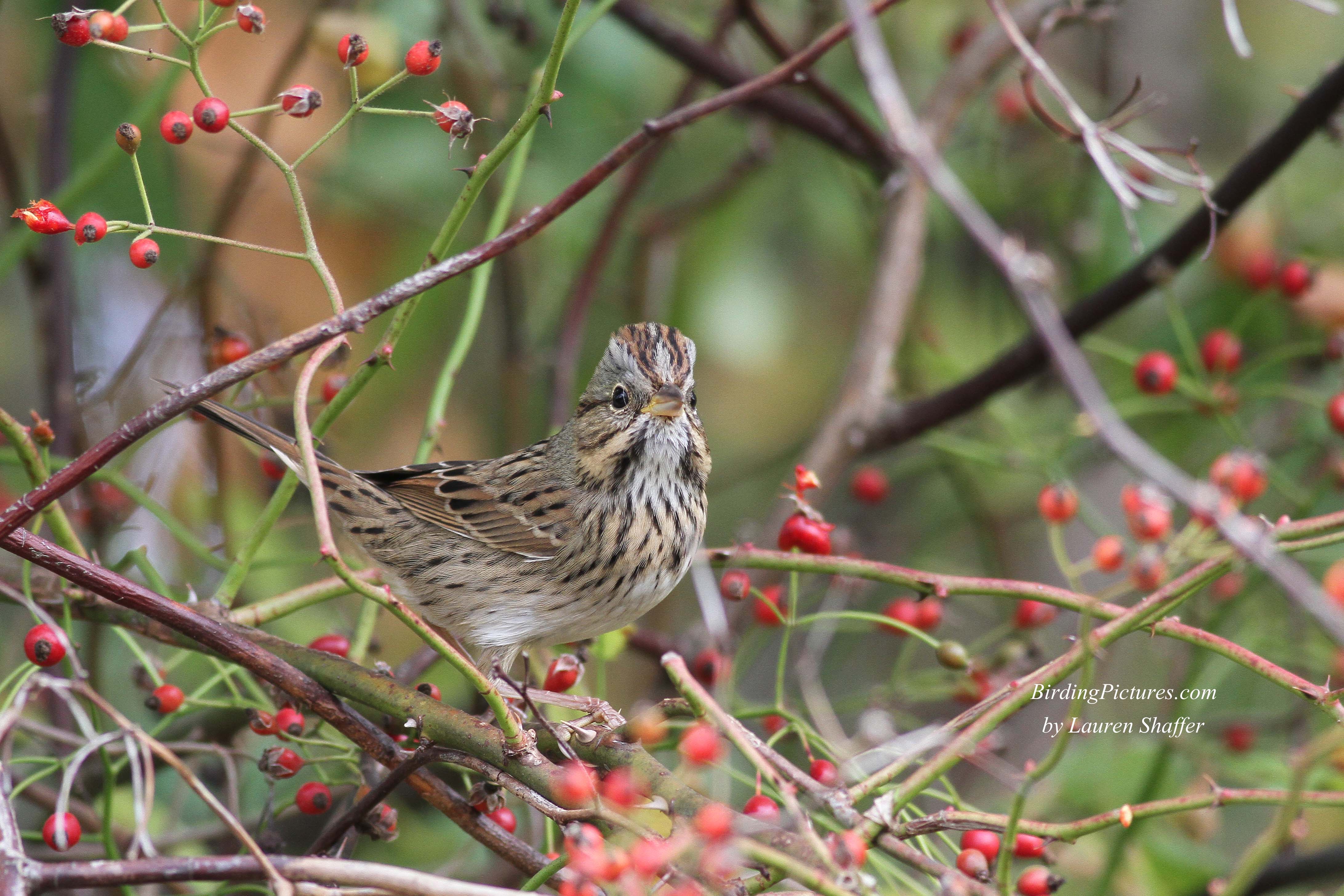 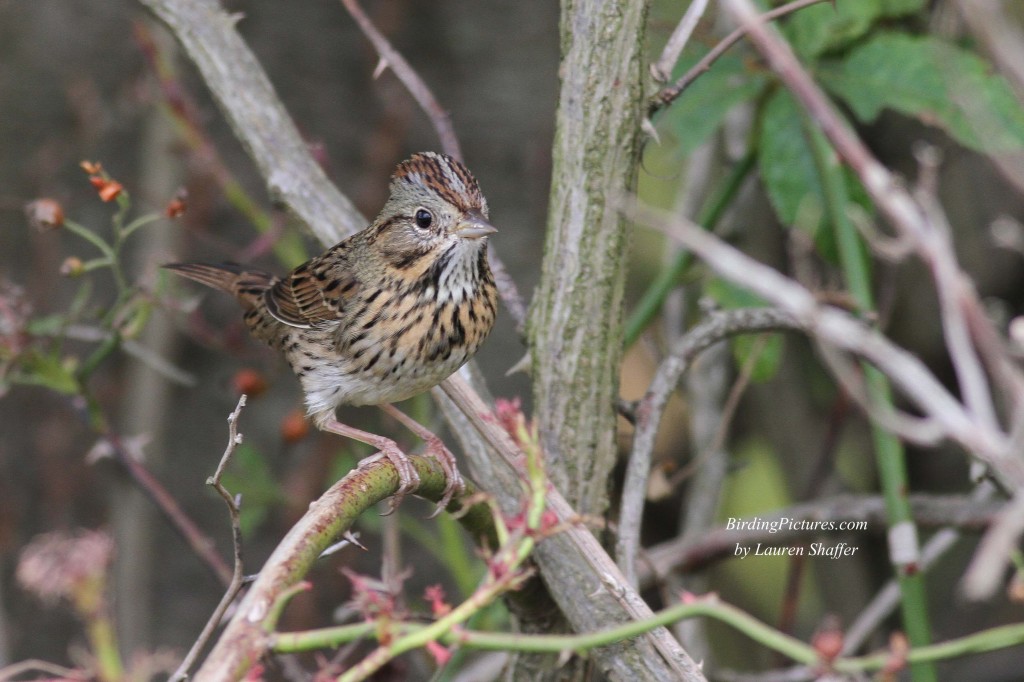 Lincoln’s sparrows are always a treat to see in fall migration in Pennsylvania.  Their finely streaked sides and breast, along with their buffy malar stripe and upper breast, an eye ring, and white throat and belly all combine to make for one handsome bird. 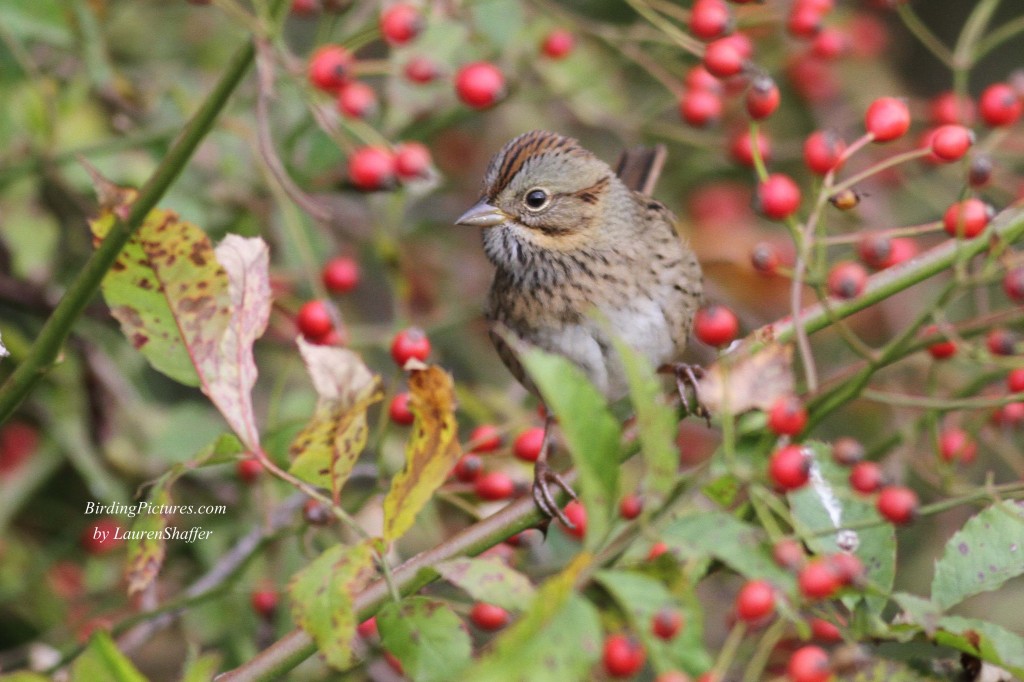 This fall I discovered some wonderful habitat for migrating sparrows and warblers.  At the bottom of a private lane of a neighbor, where field, prairie (shrubby grassland), and deep woods converge; dozens, if not hundreds of mostly sparrows are often found in the grasses, multiflora rose, and autumn olive. Towhees, Mockingbirds, and some warblers are also usually present. When I can catch a photo of a bird in the multiflora rose with its red rose hips, or in the Sumac or Pokeberries, it makes for a colorful picture as the Lincoln’s Sparrow above demonstrates. 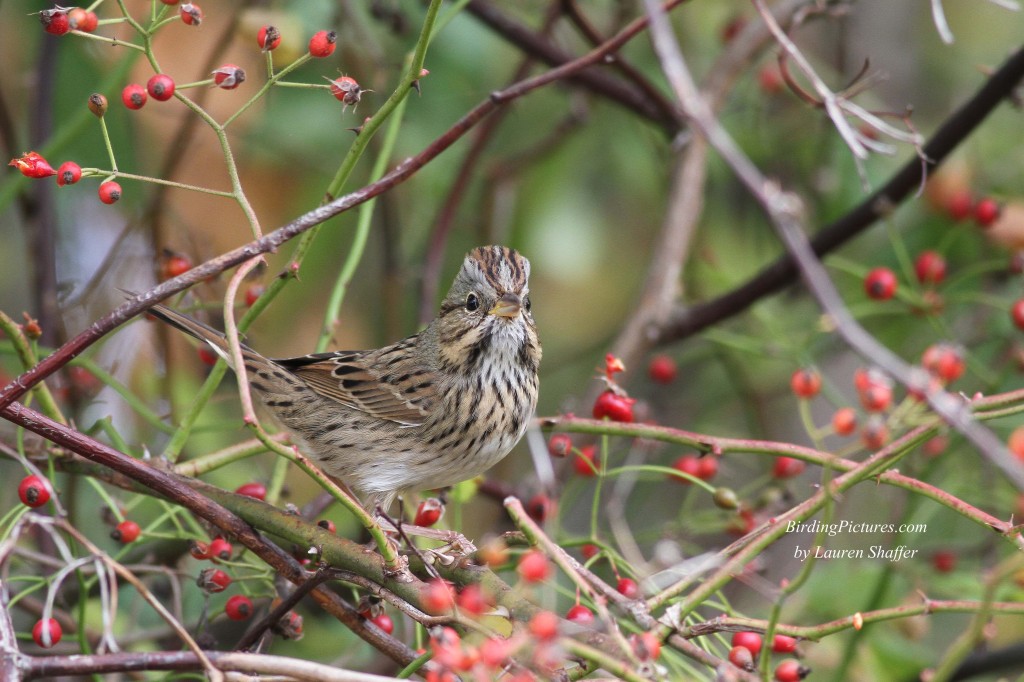 Fine black streaks are the key in identifying a Lincoln’s Sparrow.  Its back, sides, breast, and even its white throat are all finely streaked. 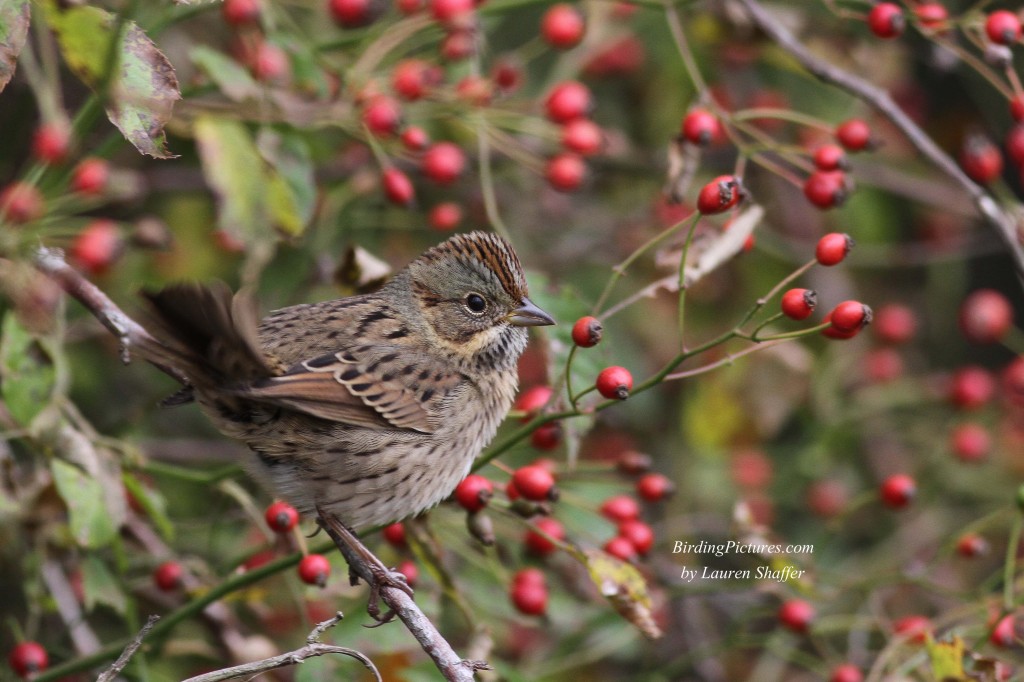 A jaunty little sparrow, the Lincoln’s crest is often peaked as if alarmed. 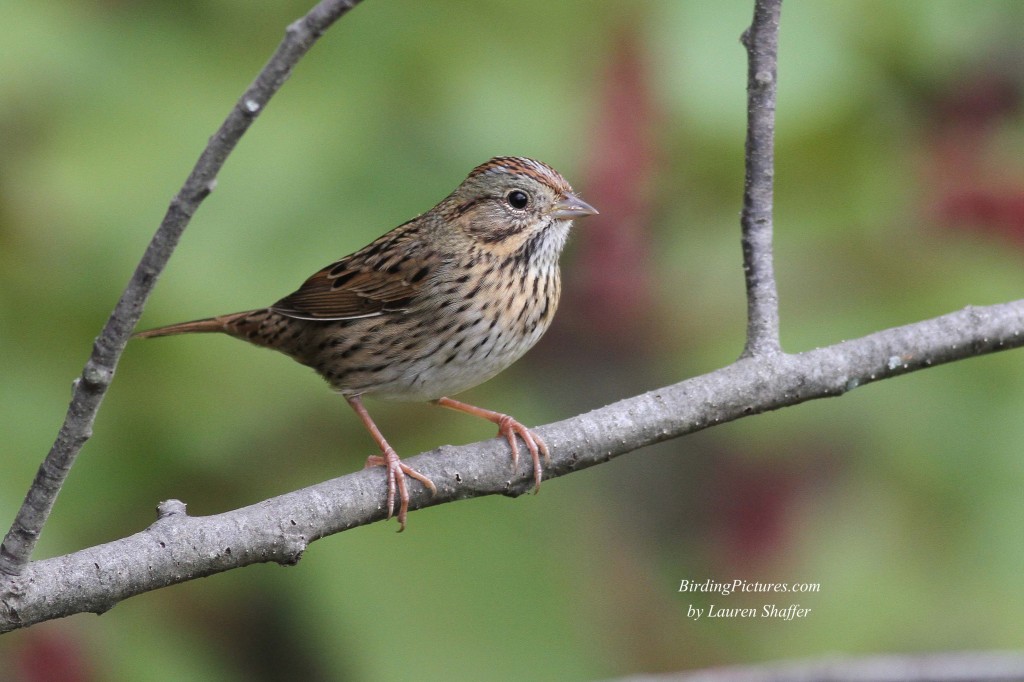 It’s unusual to see it with its crest not peaked as in the photo above and below. 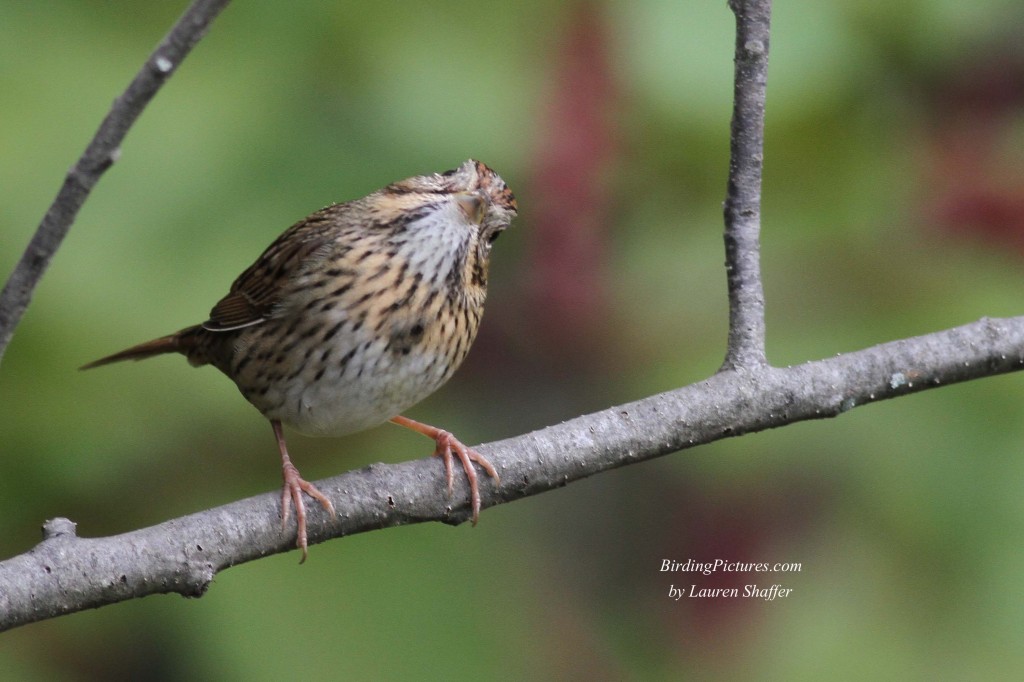 The guide books say that the Lincoln’s Sparrow does not have a central spot which helps differentiate it from the Song Sparrow; but no one told this individual that bit of information! 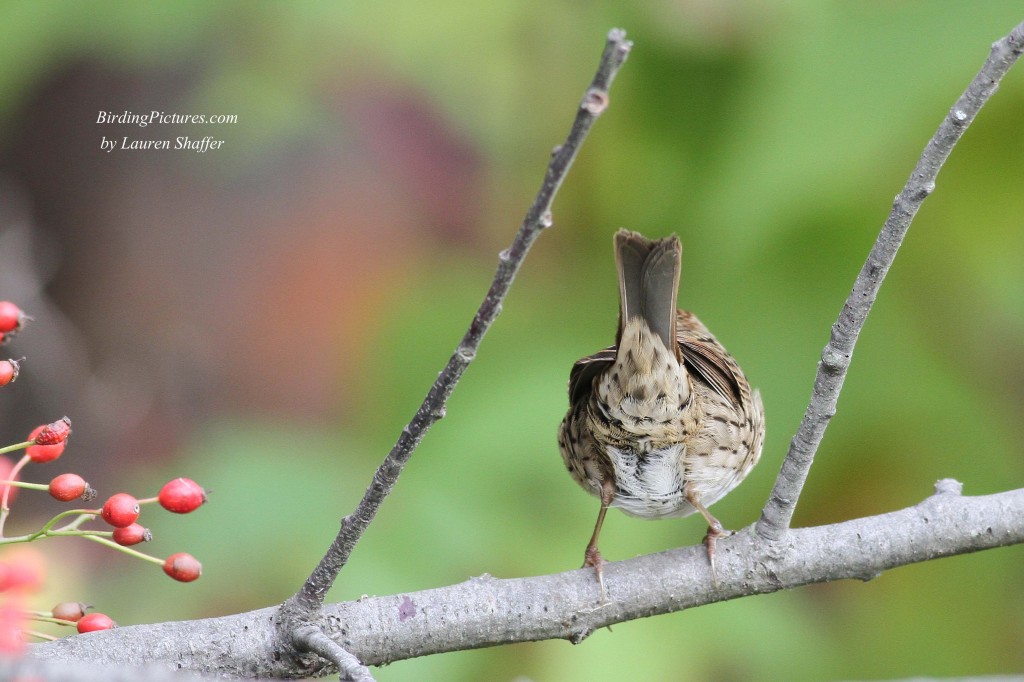 One last pose showing streaks even on the under tail coverts!

More about this handsome bird can be found in a previous post: Lincoln’s Sparrows Passing Through.