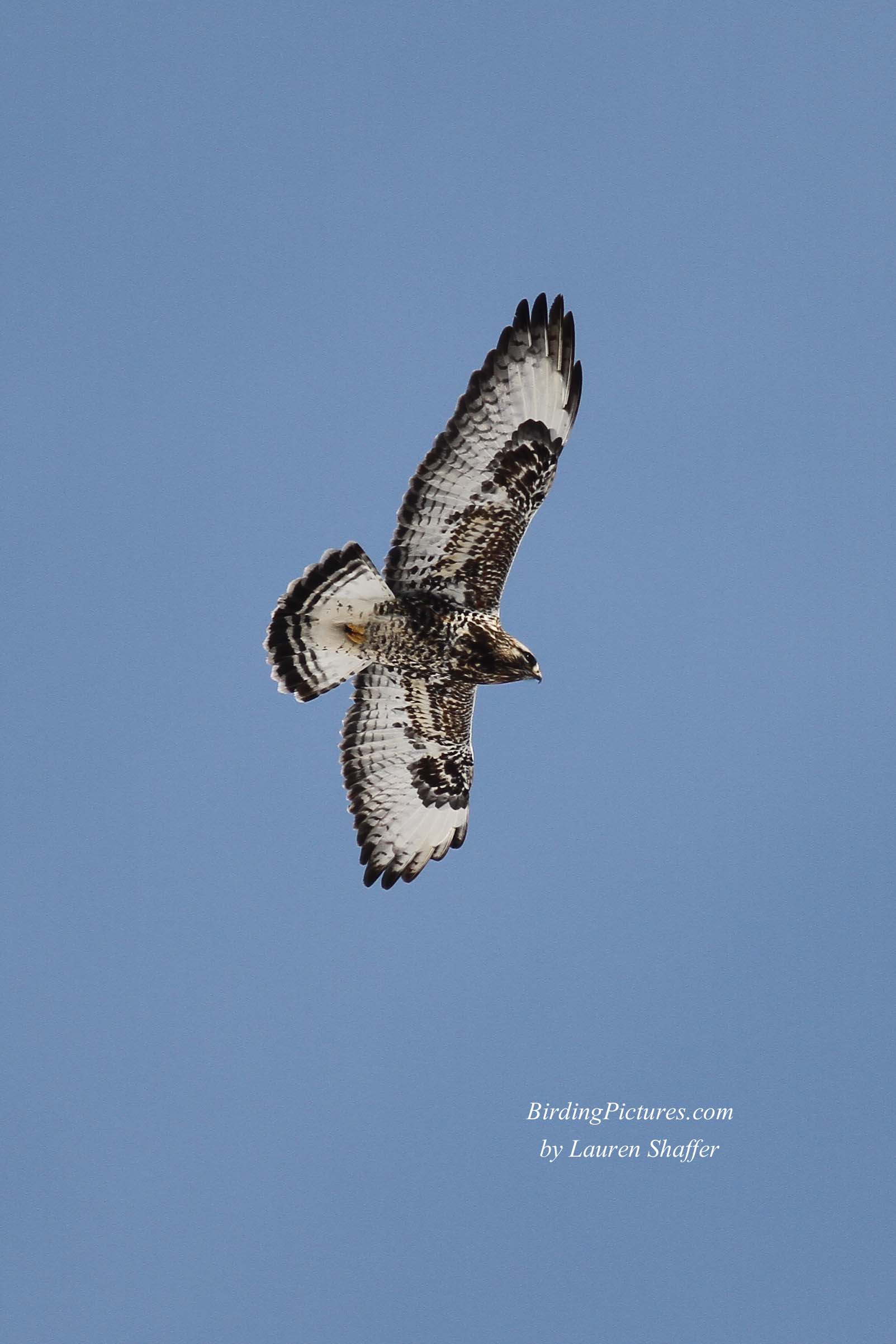 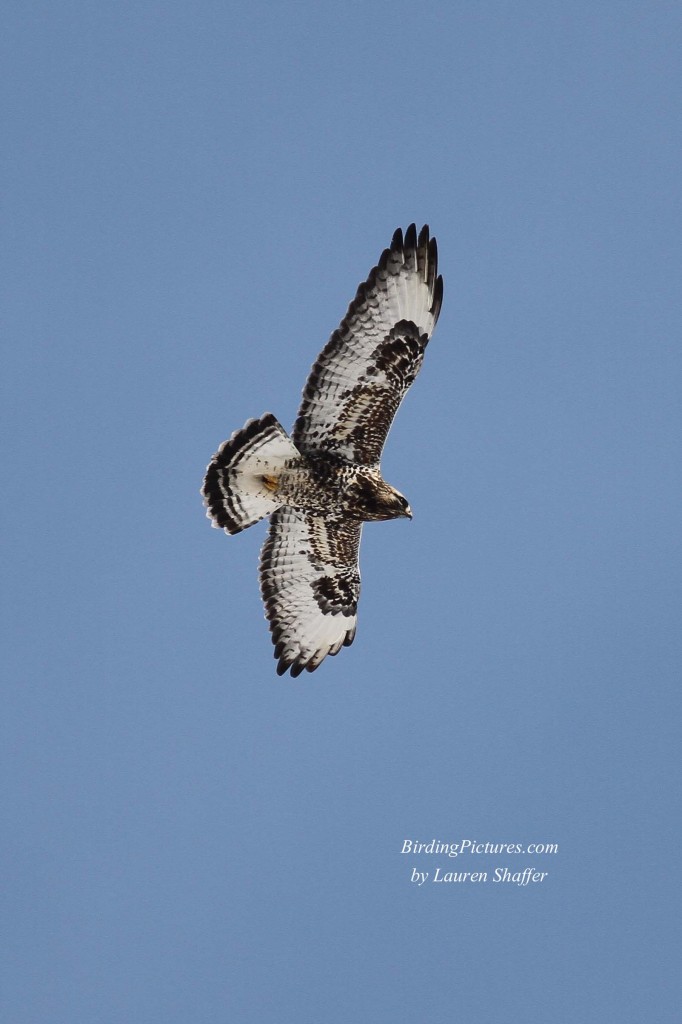 The Rough-legged Hawk, a gorgeous raptor which breeds in the Artic, comes south in the winter through Canada to stay in much of the U.S. in order to find food. We see them here in rural Central PA towards the middle of winter, in good numbers. They are also found in Asia, Europe and Greenland unlike our other buteos. Their feet are covered with feathers, hence the name “Rough-legged.”

Rough-leggeds have two color morphs, light and dark, and are strikingly patterned. There are also differences according to age and sex. The bird pictured above and below is an adult male light morph, the male having a heavier band of black on the throat and upper chest rather than on the belly. An adult male can look almost like a heavily-spotted checkerboard with a slight separation between bib and belly as in these photos. The tail of both male and female have a thick subterminal band. Females will have a single prominent band, and sometimes a fainter band as well, but males generally have multiple rows of banding of their white tails. Heads are usually pale. 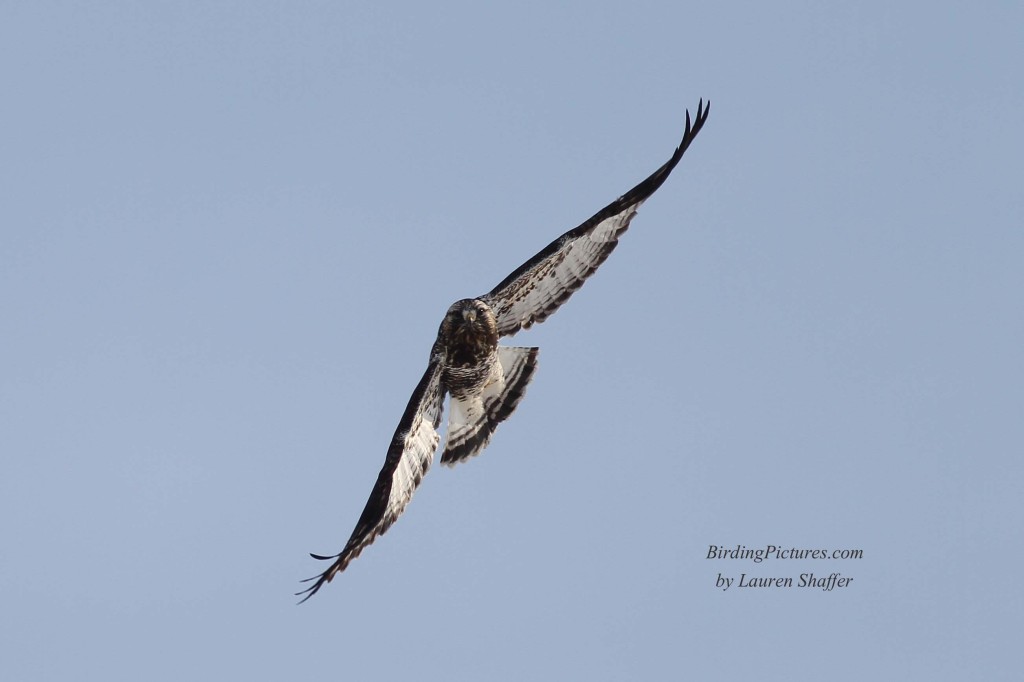 These three light morph hawks are fighting over the food which the hawk in the lead has stolen from a Harrier. See Rough-legged Hawk Food Fight! 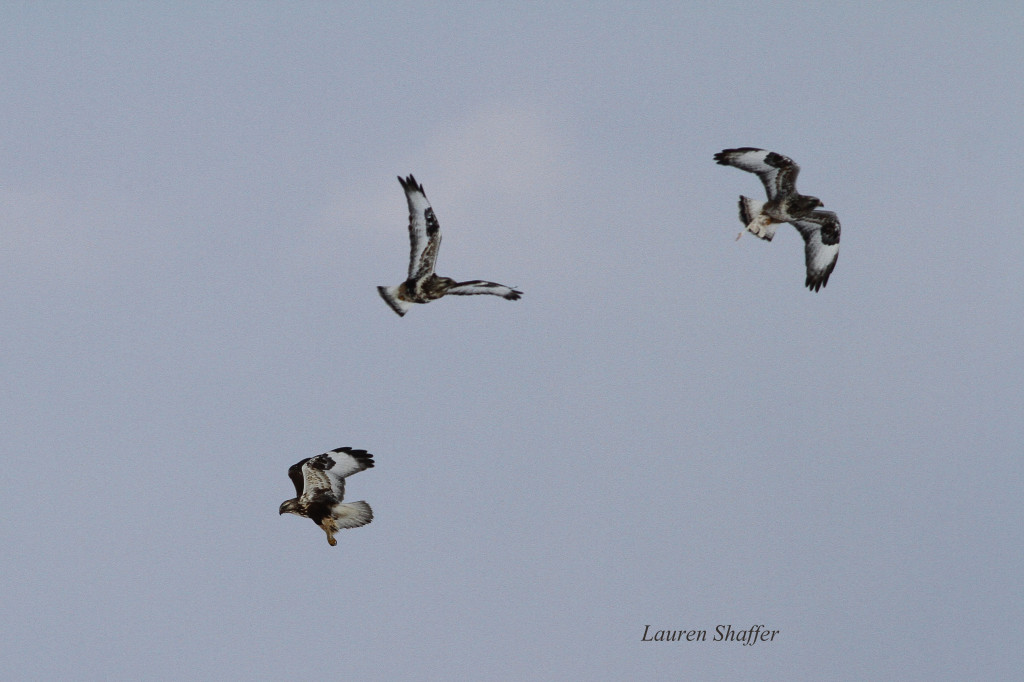 This juvenile, identified by its light-colored eyes and pale trailing edge of the wings seen in the second picture, is perched on a phone pole overlooking a field; a common sight. It shares other characteristics with the adult female such as it being more chocolate brown than black like the male. 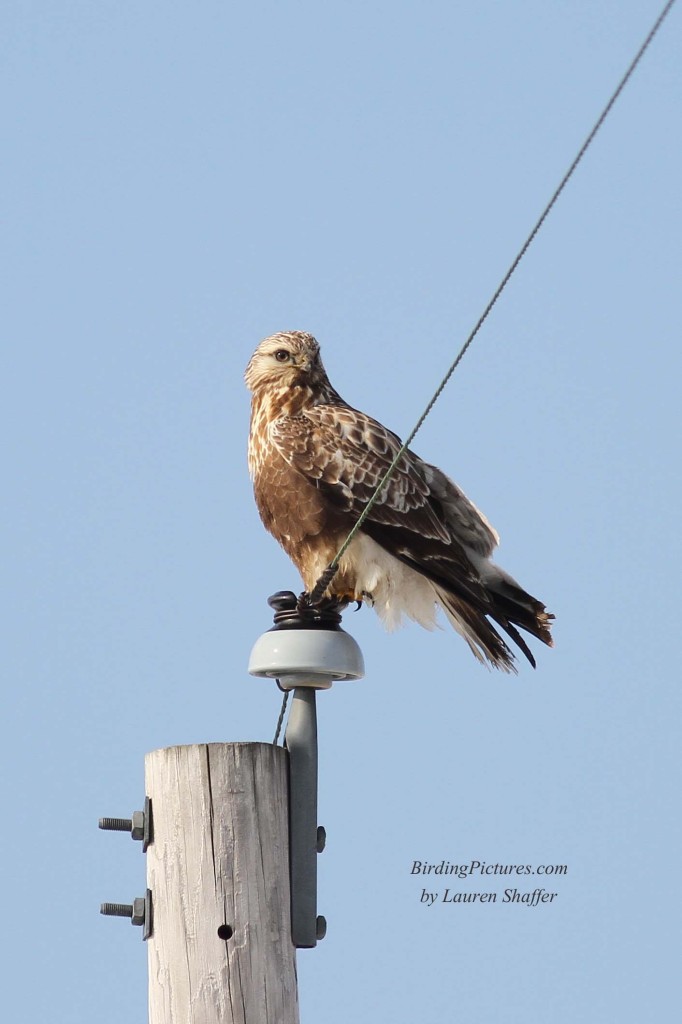 Pictured below is the same bird taking off, exhibiting the broad belly band (much thicker than a Red-tailed Hawk), the feathered legs, the very long, broad wings and heavy body, and dark carpal patches. Between the carpal patch and the dark wing tips, there is an almost translucent window of white. 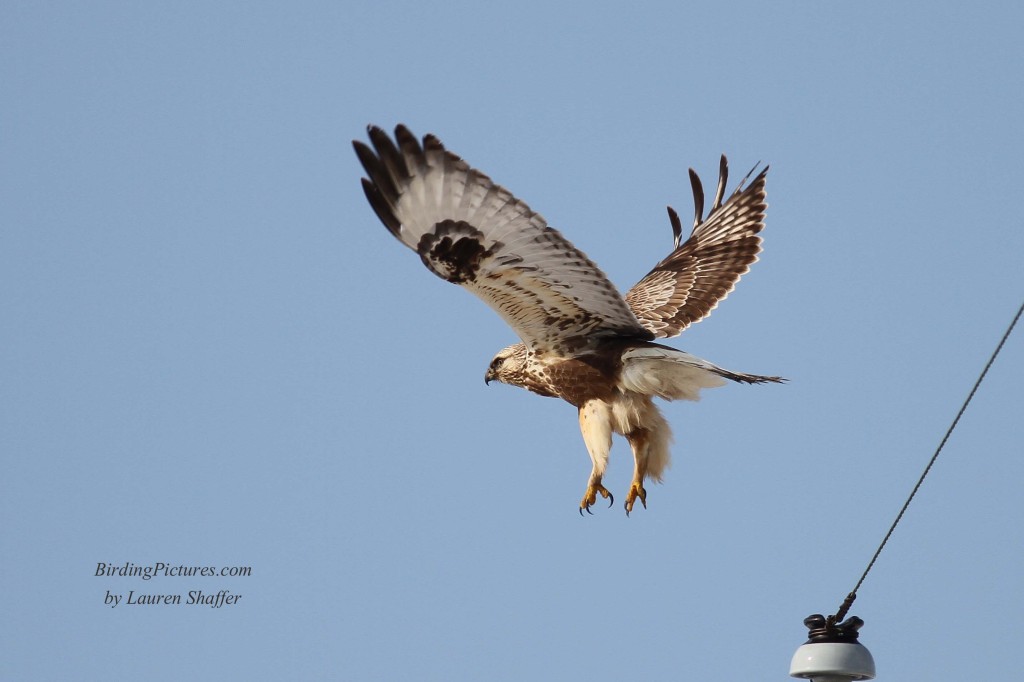 As it flies away, the dark splotches on its wrists are prominent. 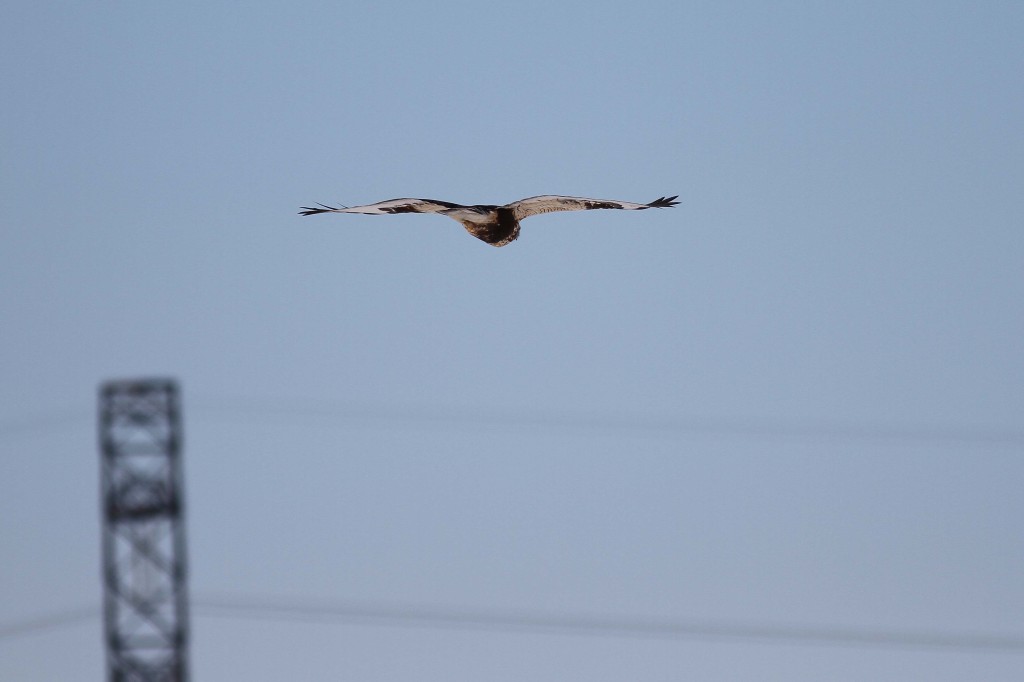 Rough-legged hawks perch and hunt much like the Red-tailed hawks, looking out over a field for mainly rodents and some birds. They will often perch higher and on thinner branches than Red-tailed hawks though, like this male below. They are as agile as a Northern Harrier in flying high or low over the fields looking for prey. 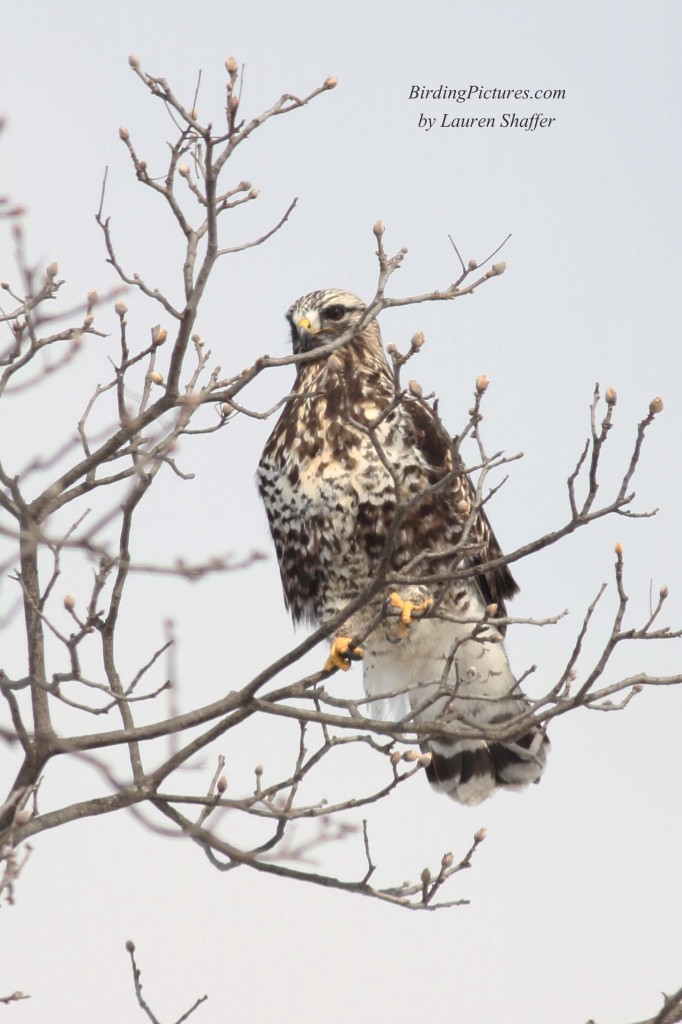 Rough-legged Hawks not only “row” through the air with powered strokes of the wings, or flap and glide, but can often be seen hovering over a field. This bird with the diffuse light-gray trailing edge of the wings and tip of the tail is a juvenile. 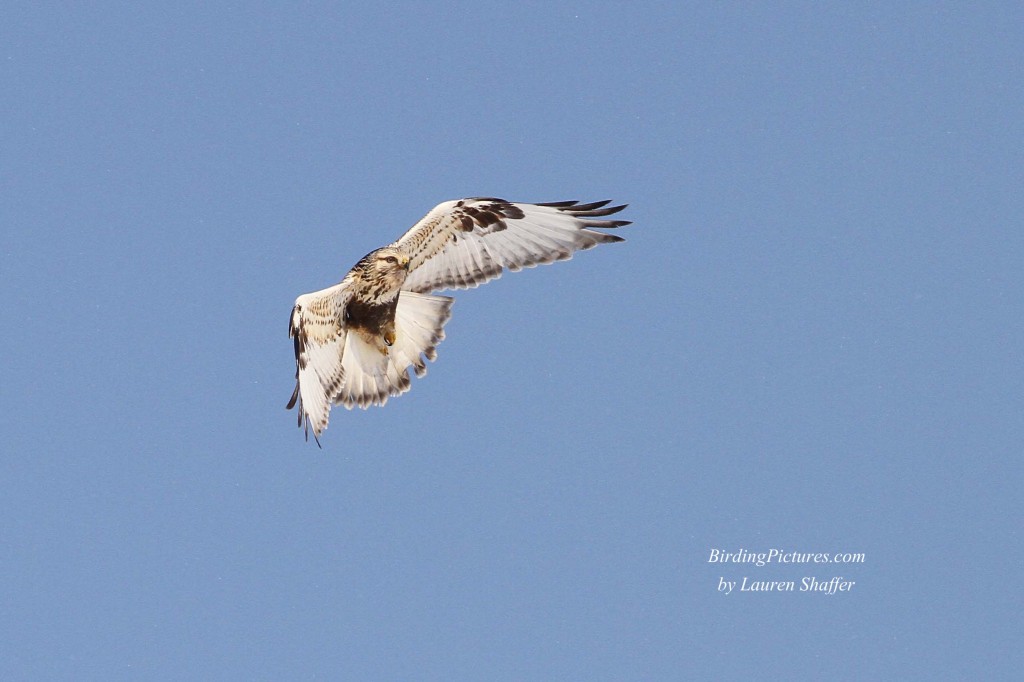 A perched dark-morph Rough-legged looks almost completely black except for the tail. 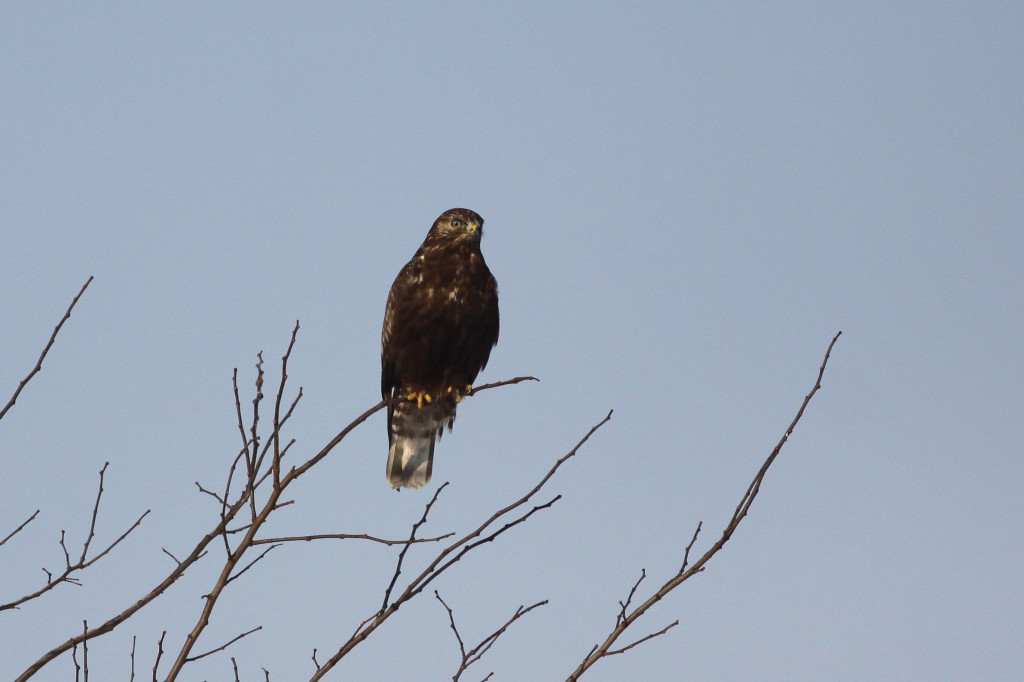 This dark morph hawk is guarding its dinner from the other hawks nearby by “mantling” it with its wings. Although it’s completely dark underneath, it still has a significant amount of silvery white on its flight feathers, and carpal patches which are darker than the dark area on the rest of the wing. 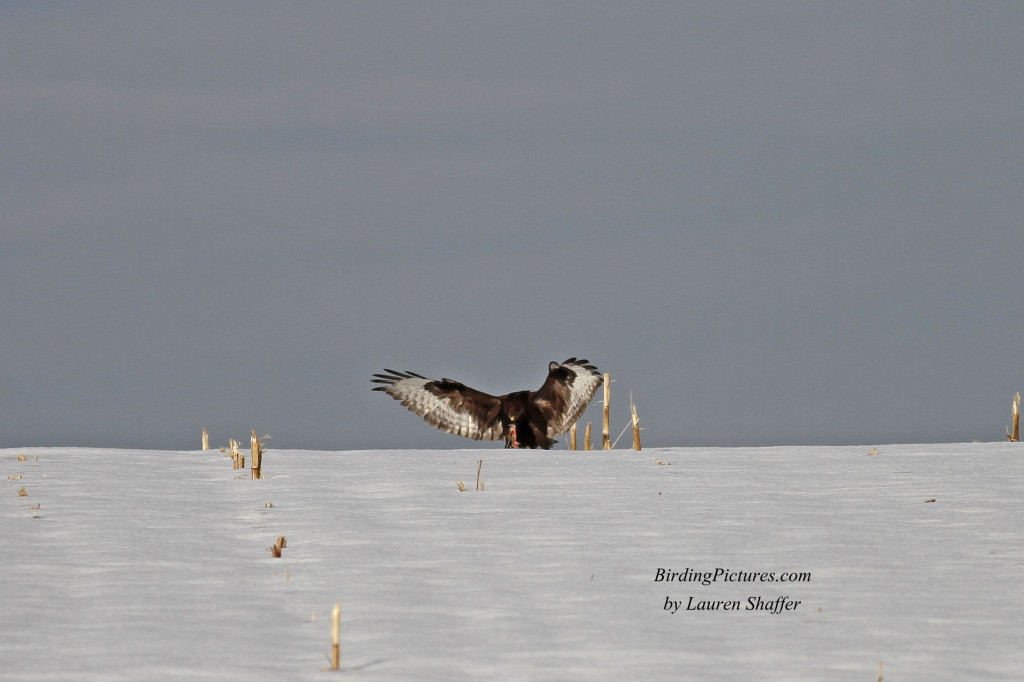 Shape of the Rough-legged Hawk is distinctive with its chunky body, large head and small beak, long plank-like wings held in a slight dihedral while gliding, and tail broad but longer than other buteos. 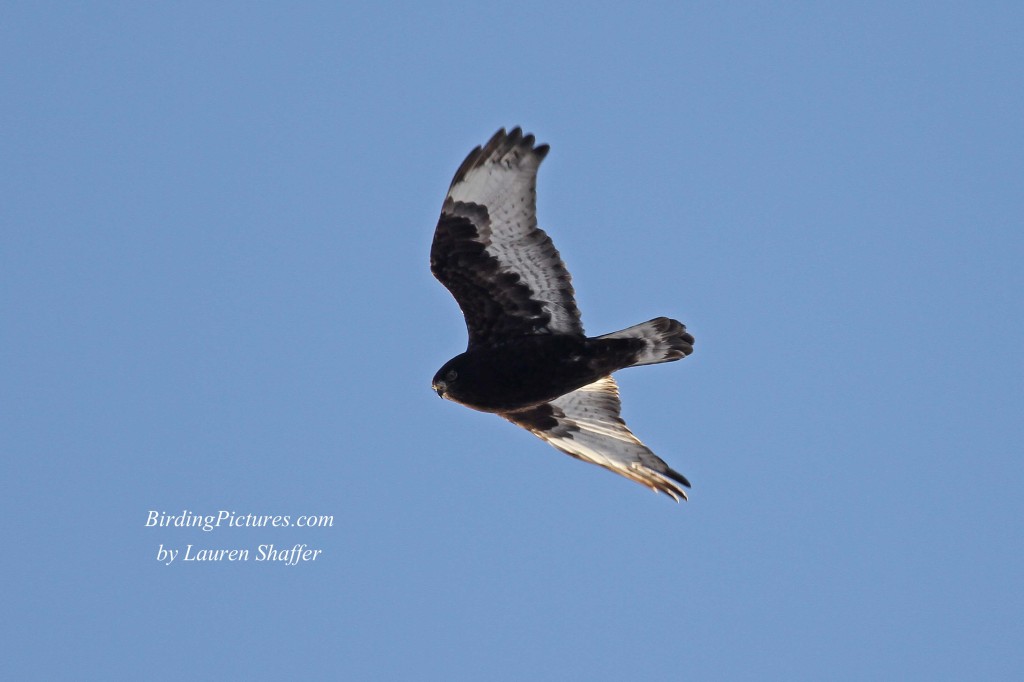 Looking at the final photo, are you able to identify the age, sex, and morph of the bird? 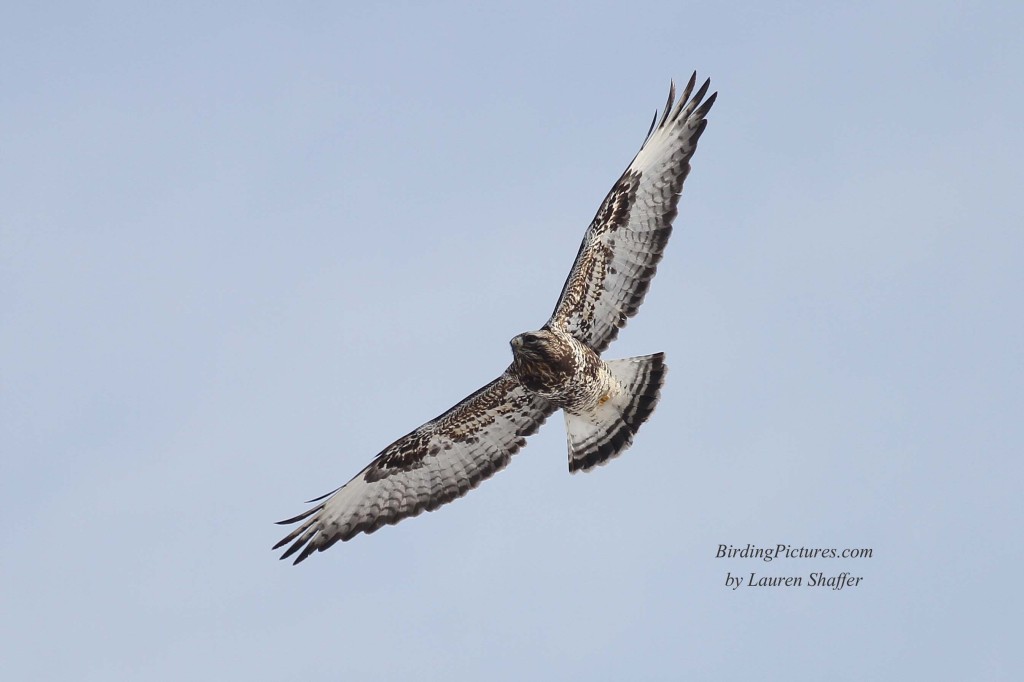 Ready for the answer? This is an adult male light phase Rough-legged because of the prominent bib and multiple dark bands on its tail. Most of the information gathered for this post comes from “Hawks in Flight” by Pete Dunne, David Sibley, and Clay Sutton. The photos are all from my rural neighborhood!