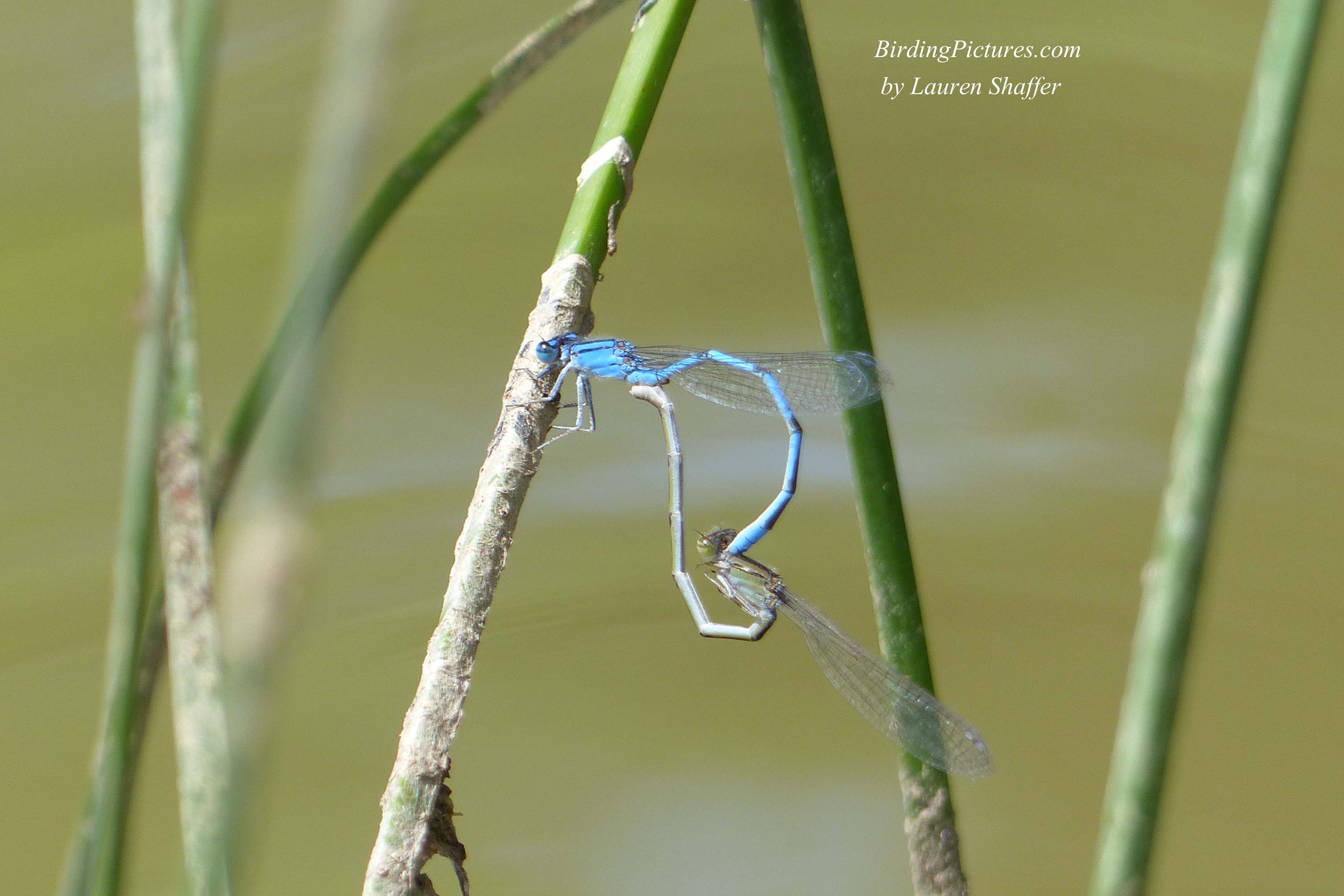 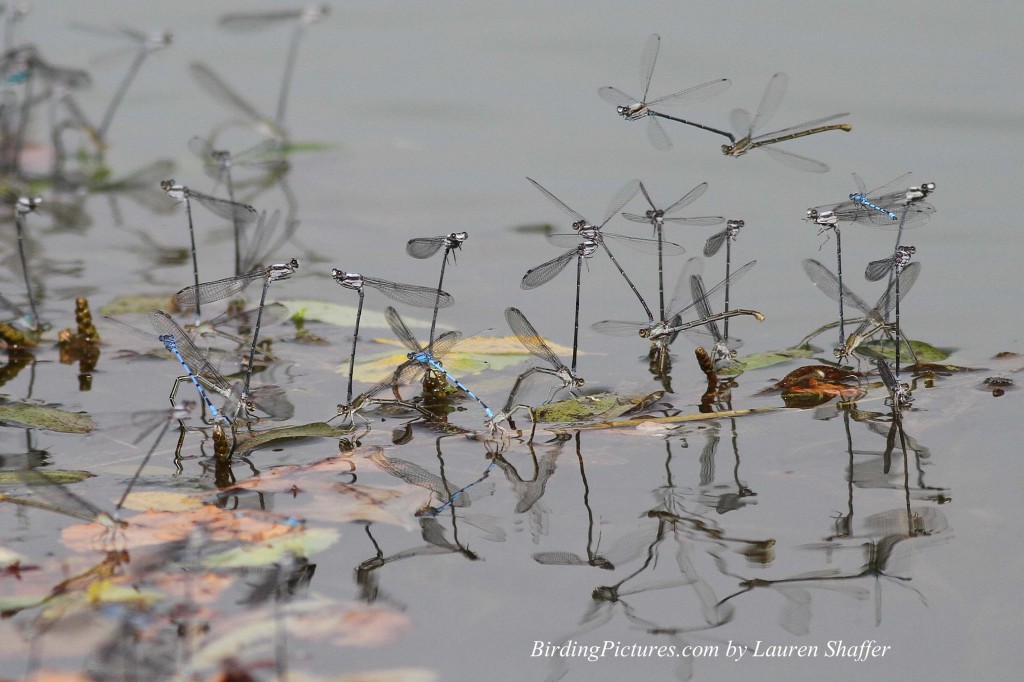 After the storm yesterday, I noticed a few hazy patches of vegetation in the water, maybe 25 feet out from shore.  A photograph with a long lens showed what was making the hazy movements.  There were hundreds of damselflies, most in tandem, busily laying their eggs in the vegetation!  These are mostly Powdered Dancers, with a few Bluits joining the massive egg-laying party.  Wikipedia gives an interesting explanation for the Latin name of Powdered Dancer (Argia moesta):

The common name refers directly to the male’s pruinosity, appearing to be covered with a powdery blue or grayish substance. Older males are more pruinose, and may even be more ash white than blue. The scientific name moesta, means sorrowful, and may refer to customs (such as those on Ash Wednesday) of dusting oneself with ashes to express sorrow or mourning. 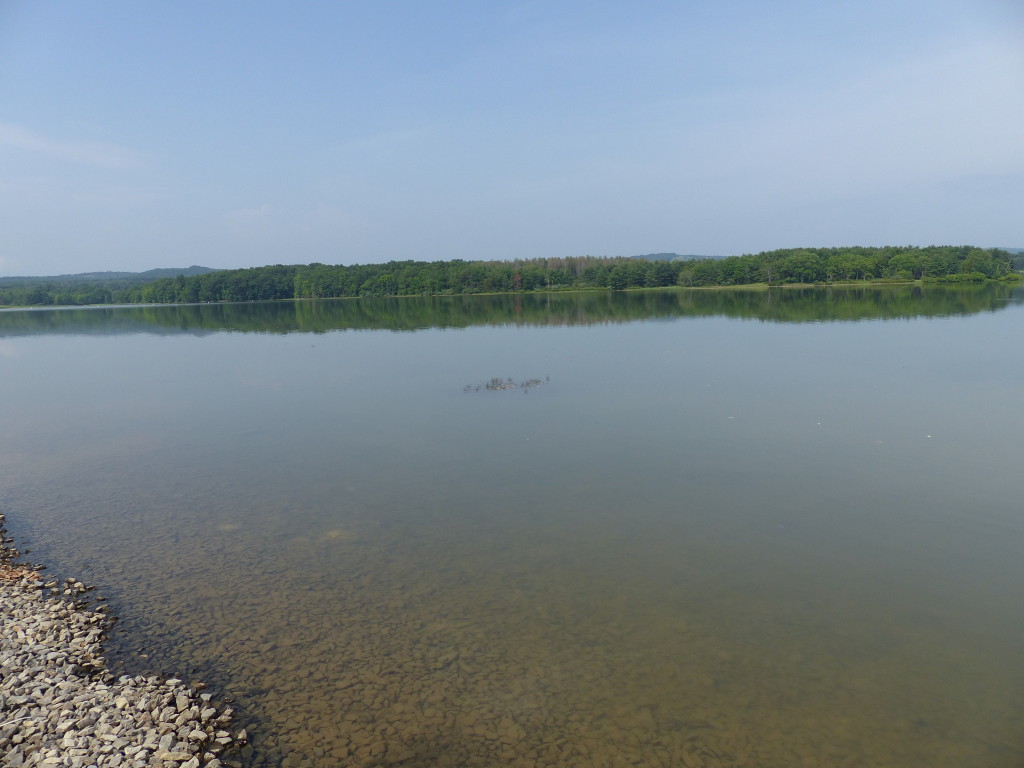 This is what I noticed on the lake.  I almost didn’t take a second look, but I’m glad I did!

Here’s a close-up video of what I observed of these mating damselflies. 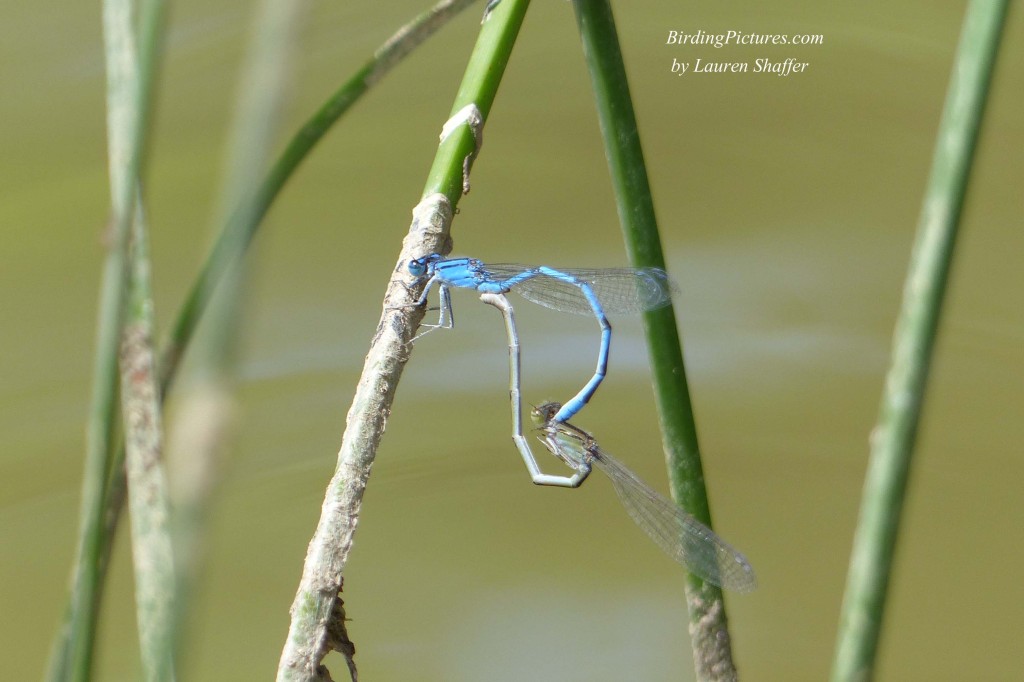 Last week while out in my kayak on the same lake, I witnessed a tandem pair of damselflies in the wheel position, somewhat like a heart.  By clasping the female behind the head, the male is able to transfer a packet of sperm to the female in this position, and soon after, the female will lay its eggs using its ovipositer.  The male will often stay in tandem with the female as she does this, which is called contact guarding.  This species oviposits in floating vegetation as seen here. 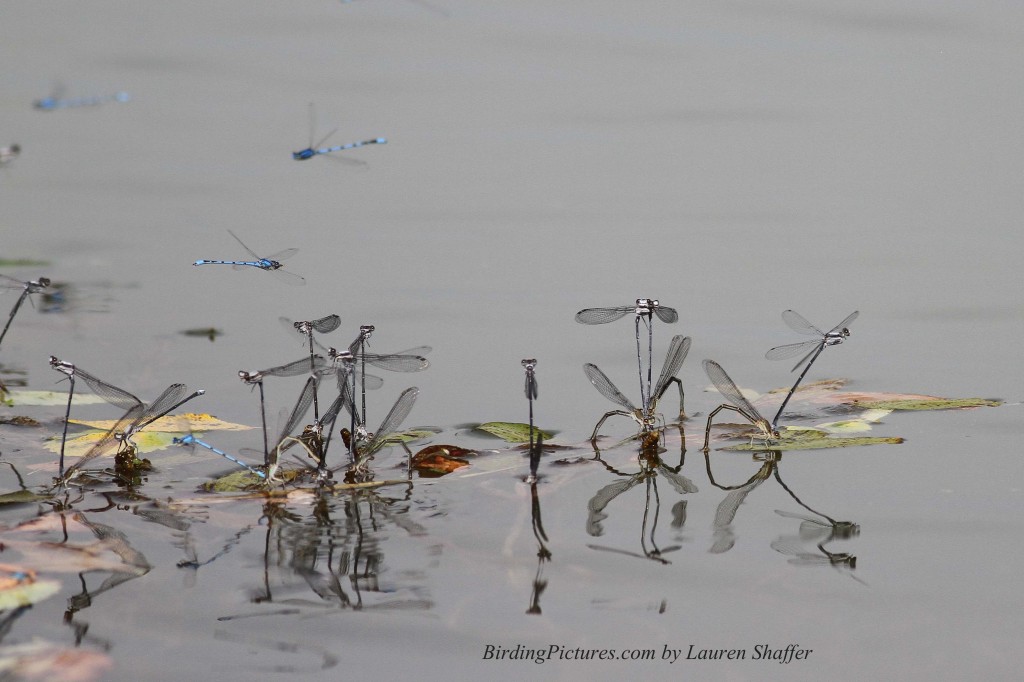 Reflections in the water double the sight of so many tandem pairs having their egg-laying party. 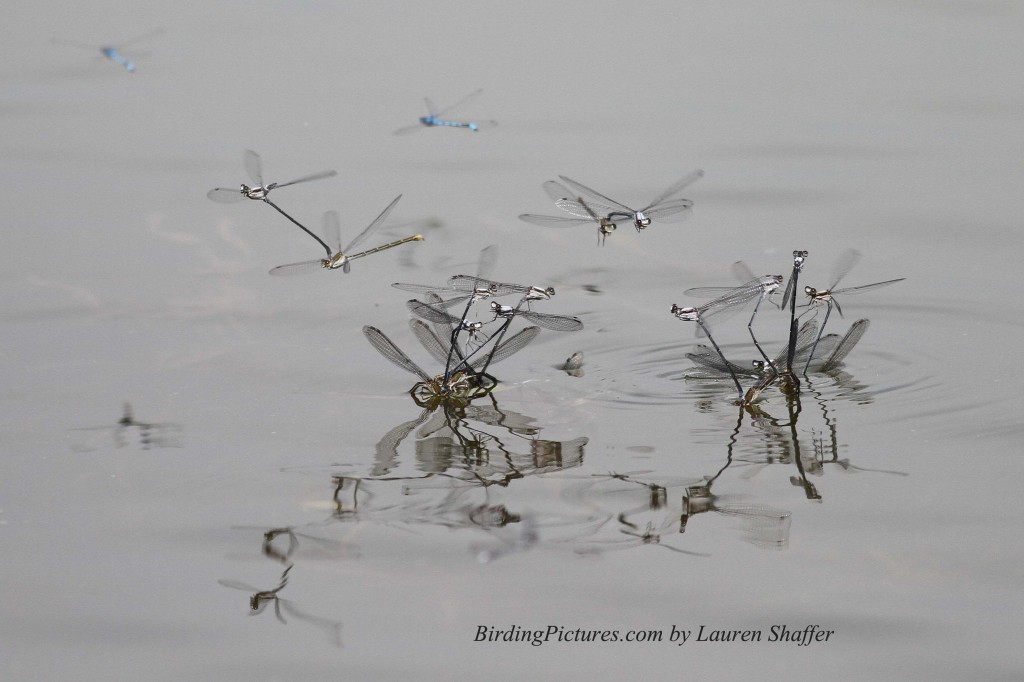 Two flying tandem pairs can be seen above. A few pairs look like they’re drowning, but probably not. 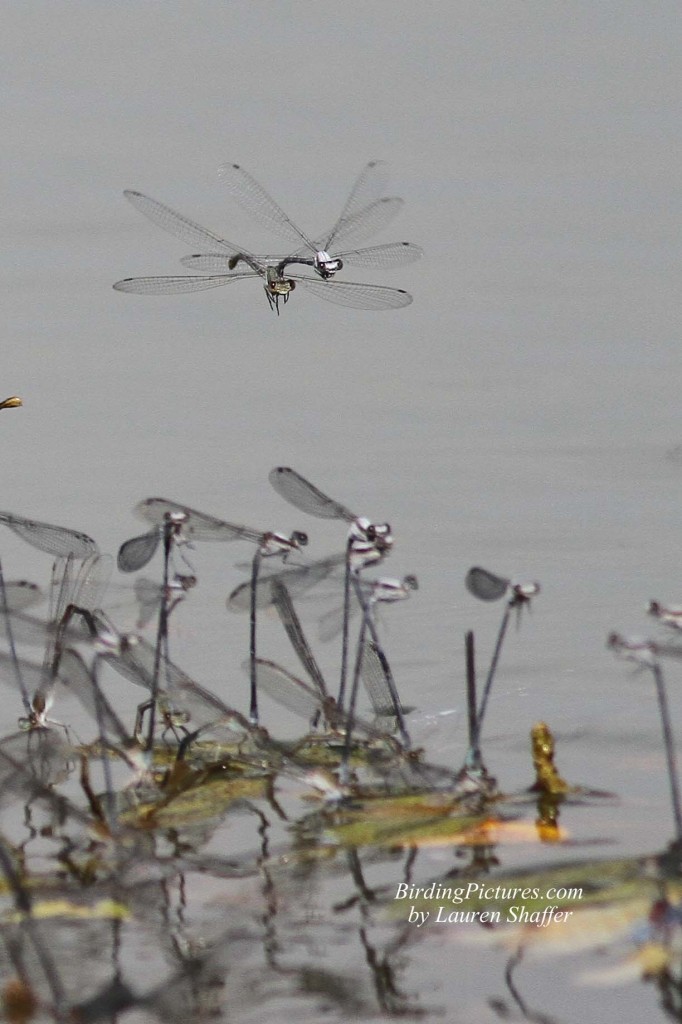 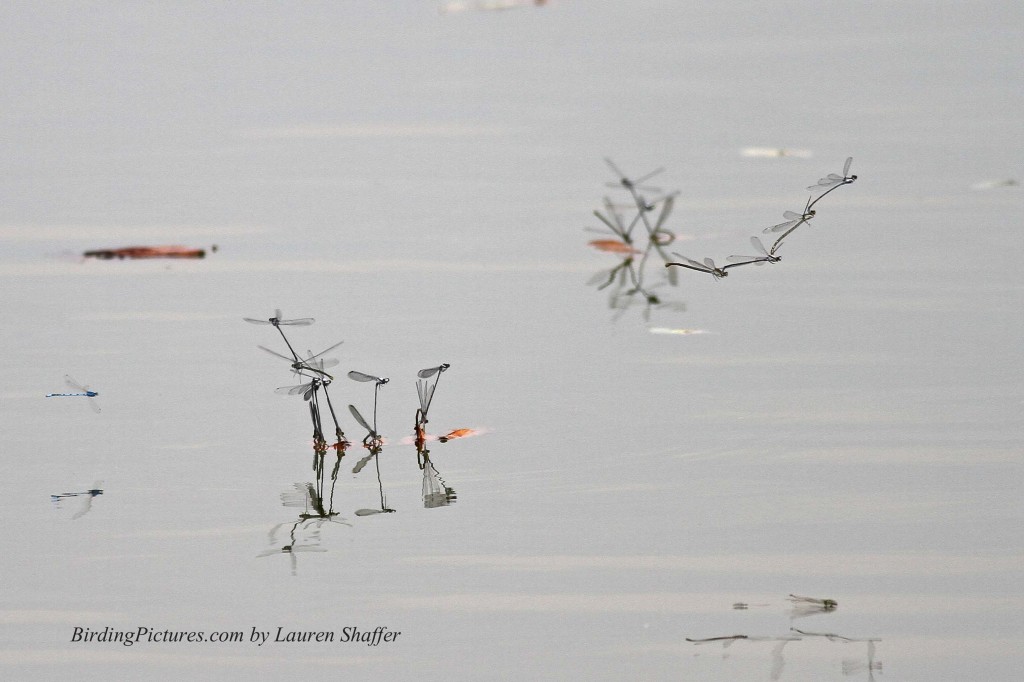 Four damselflies in tandem.  What’s with that?

If you enjoyed this post, you may also enjoy one by Kate St. John on hover flies, with a neat photo by Shawn Collins.