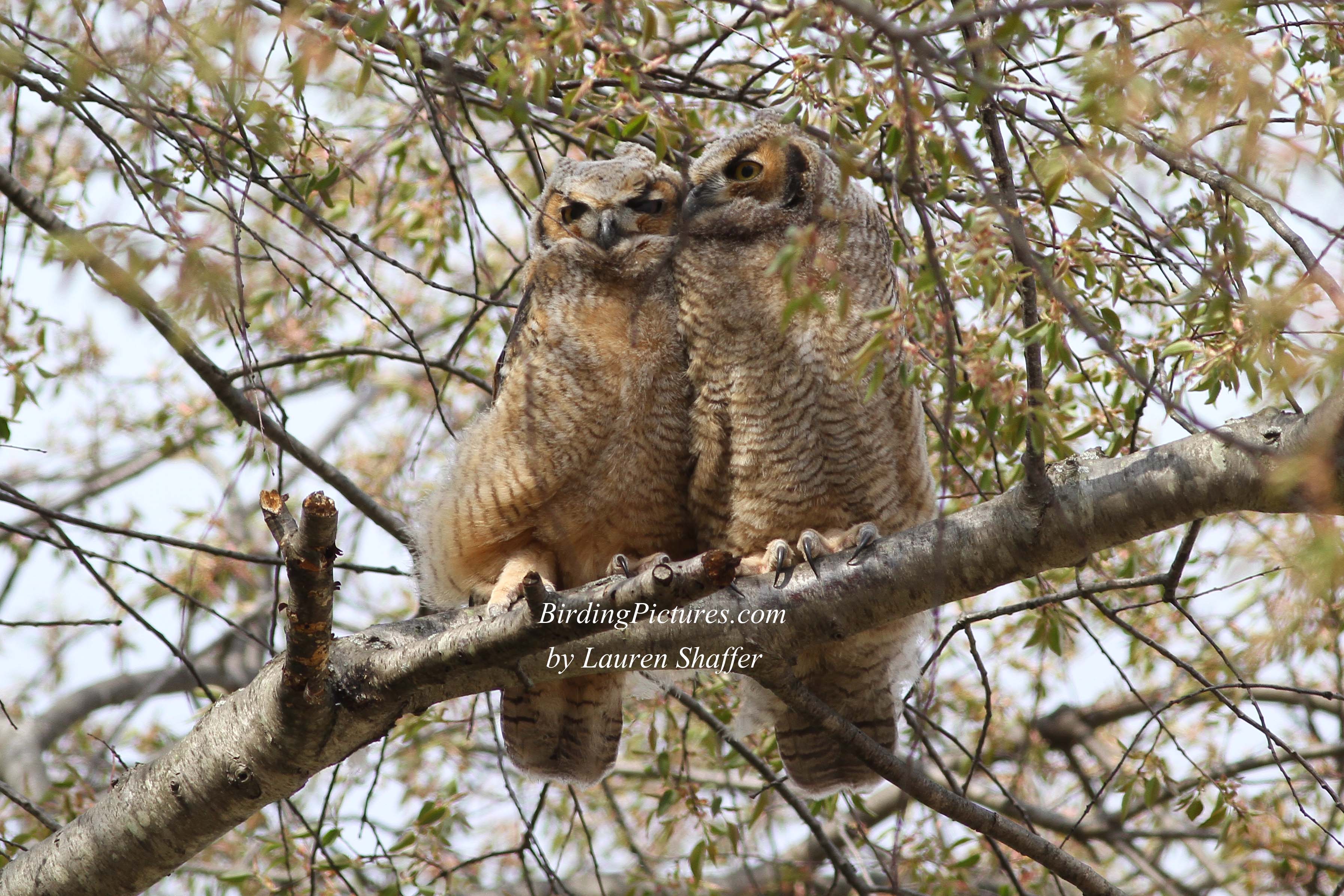 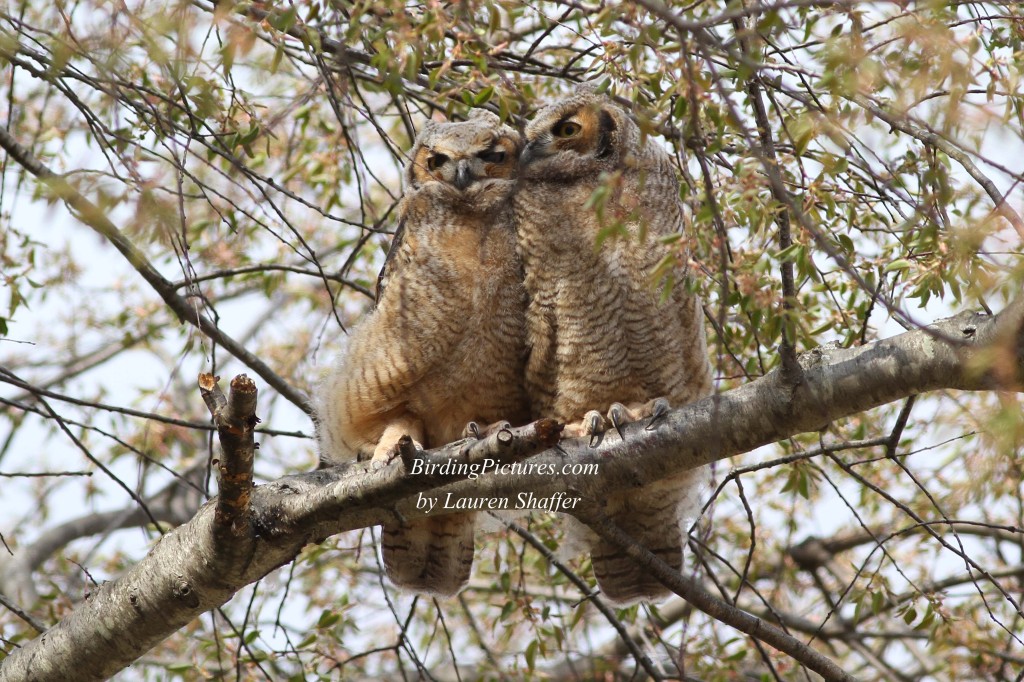 While doing some incredible winter birding this past February in our nearby farmlands, our group of birding friends spotted a huge nest in a long row of trees surrounded by hundreds of acres of fields. The locals call these hedge rows, even though they are mature trees separating one farmer’s field from another.  With frequent checking, we soon saw a pair of Great Horned Owls at the site!  One was on the nest and the other nearby.  A Red-tailed Hawk was also nesting a few trees down in the same hedge row.  Snowy Owls, Northern Harriers, Rough-legged Hawks, and Short-eared Owls were also in the neighborhood.  This small area near Milton, PA was a continuous birding party!  With permission from the farm owner, I was able to visit the nest often and document the owlets growing up!

Great Horned Owls are widespread over all of North America. Similar in size to the Red-tailed Hawk, they give a fierce appearance with their large ear tufts, orange eyes and face, and huge feet. Their talons are strong enough to grip prey their own size or even larger, and to snap their spines in two! They will eat much smaller fare also, and have the most varied diet of any North American raptor. Hunting mainly at night, they can be seen especially at dusk and pre-dawn hours.

Where do Great Horned Owls nest?

The habitat of this owl is as varied as its diet. Although it can be found nesting in cities, orchards, deserts, and parks, it usually prefers woodlands with some agricultural land nearby. They will often appropriate the old stick nest of a Red-tailed Hawk or crow since they do not build their own. They may line it with feathers and soft plant material, however, and they will choose a new site the next year due to deterioration during the nesting period. The picture below shows the owl on the nest, which is deeply covered with snow, on February 6 of this year. Its mate was often seen nearby in the same tree or the next. 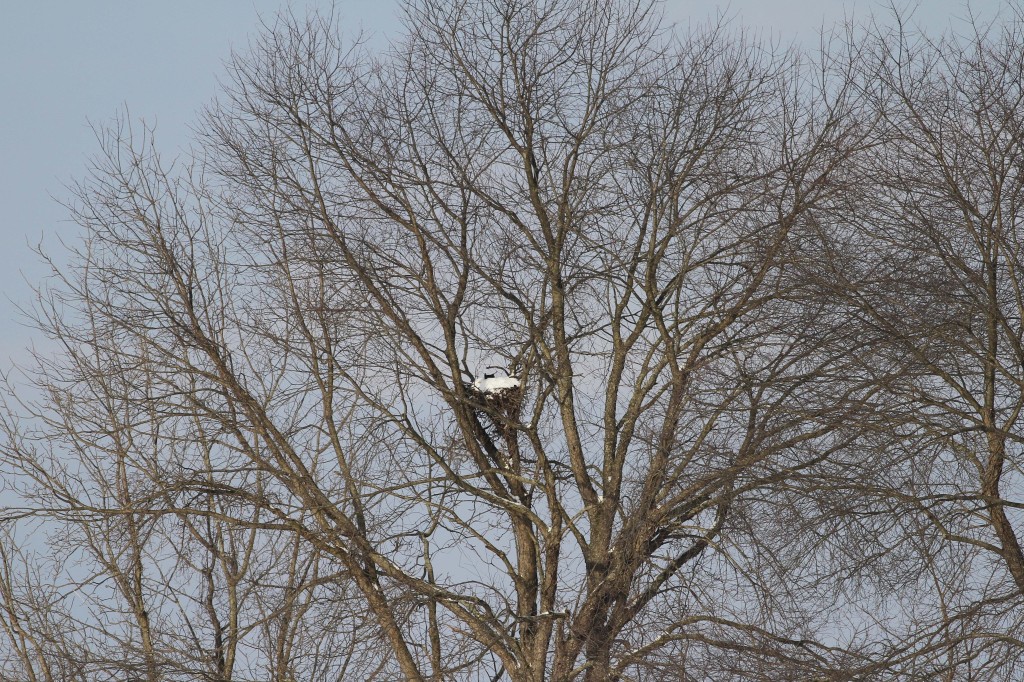 Incubation of the almost round two-inch eggs lasts between 30 and 37 days. On March 20th, a downy owlet or two could be seen deep in the nest, kept warm by the adult.

Young owls are covered with light downy feathers, and their ear tufts are only slightly developed. They usually remain in the nest for about 42 days. The picture below was taken on April 2, 2014. 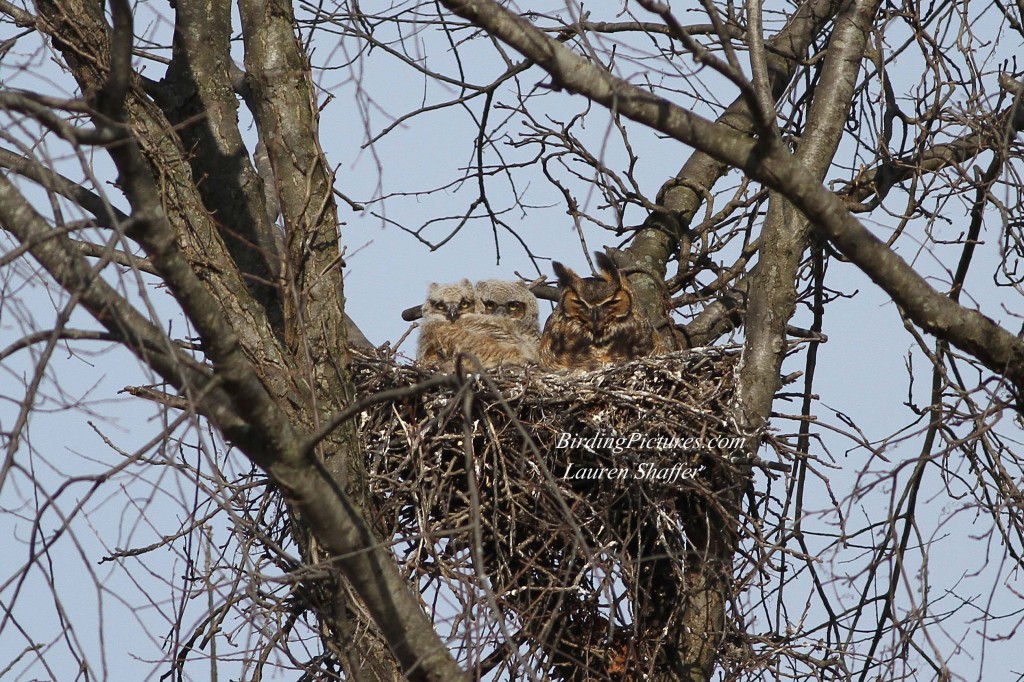 By May 3rd, a month later, the fledglings were out of the nest, climbing up and down branches and trying out their wings. This is called “branching.” When approached, the adult which was nearby flew further down the hedge row, and the fledglings would get close together on their branch. Safety in numbers! 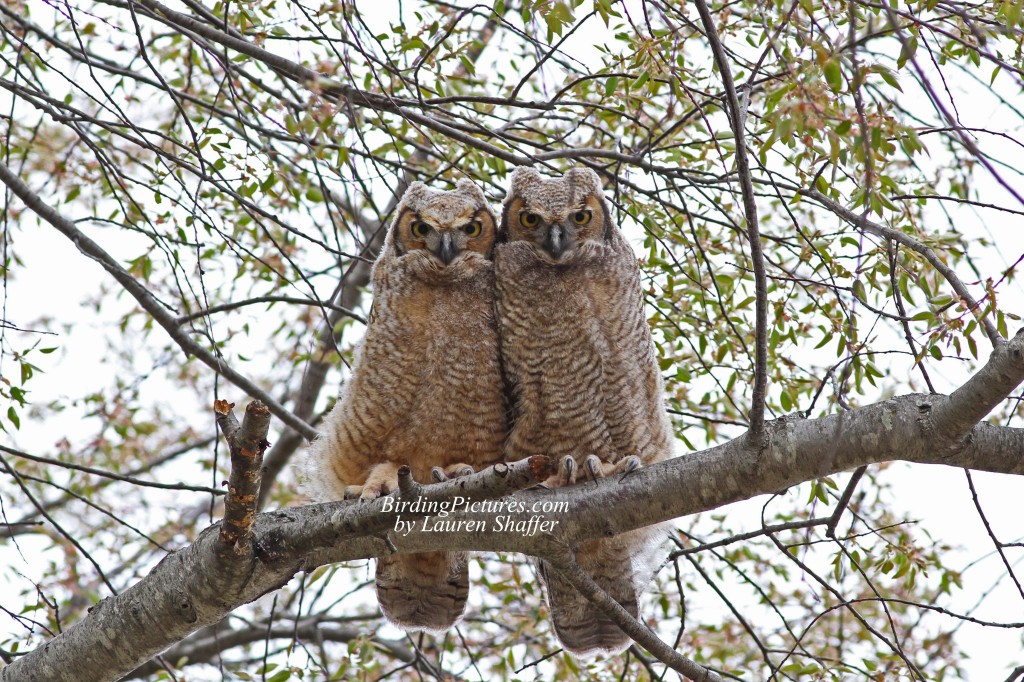 Even though the male is smaller than the female, his voice is lower than hers. To announce their territory, they will hoot back and forth, occasionally squawking. The juveniles will scream for their food, and the adults will make a variety of sounds including barking, squawking, and bill snapping. For some reason, no vocalizations were ever heard during our visits to the nest, and Mama Owl never stayed to defend her young. Check out the variety of sounds they make on allaboutbirds.org. This photo shows Mama Owl flying away from the nest area when we approached. We were glad that she wasn’t aggressive with us! 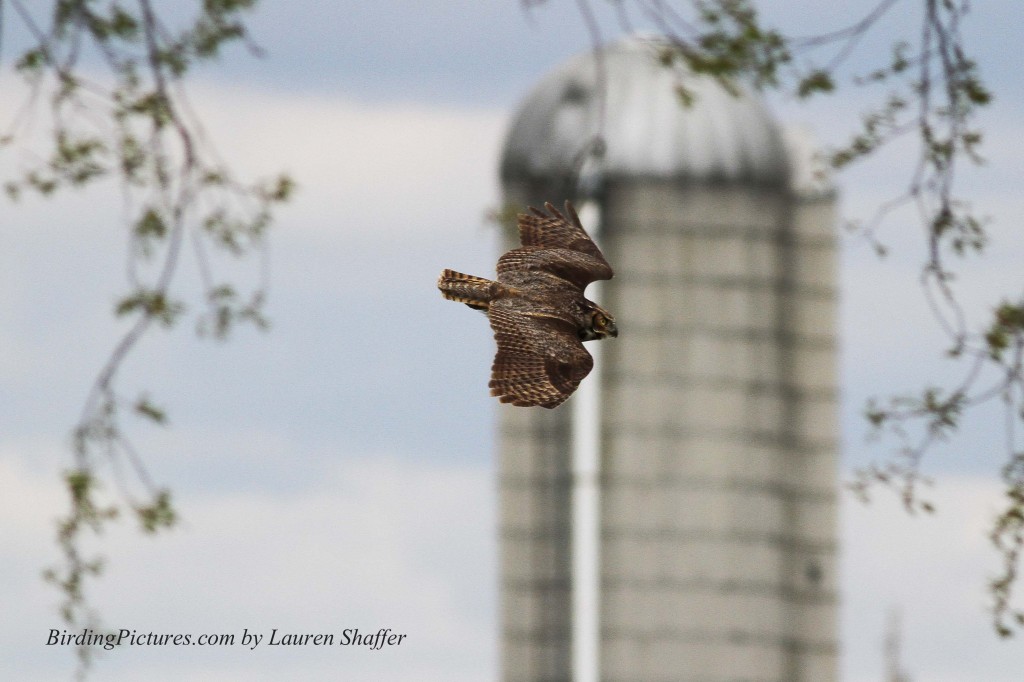 The fledglings are losing their downy feathers and are becoming beautifully camouflaged. They are looking rather fierce now instead of like little ghosts! 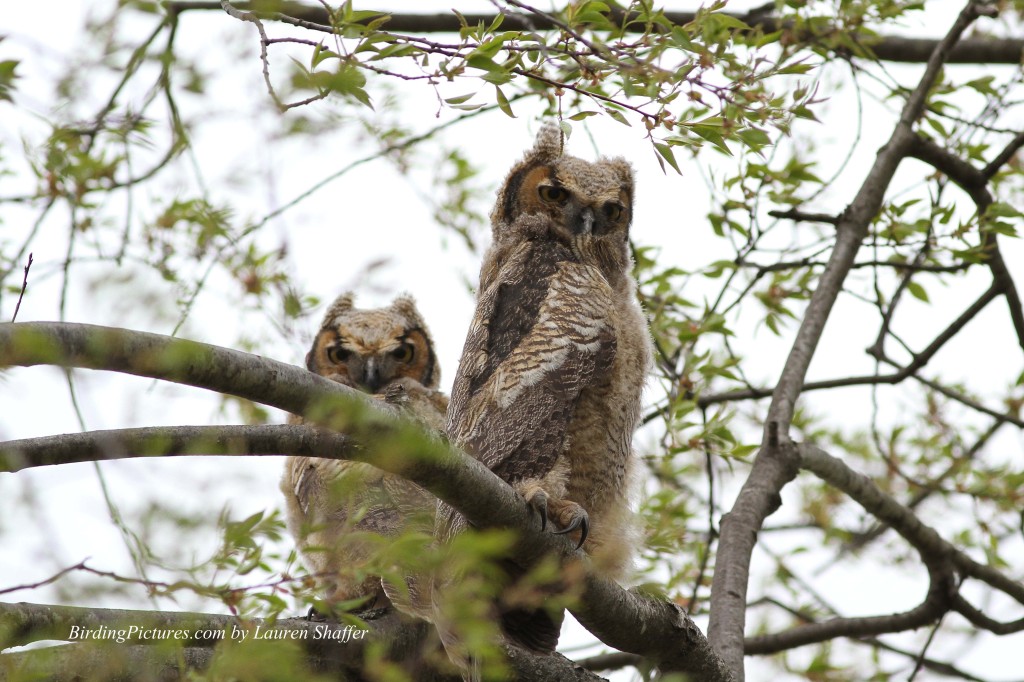 On May 18th, the last day I visited the nest, the owlets were actually flying from tree to tree, and were quite a distance from the nest site, far down the hedge row. 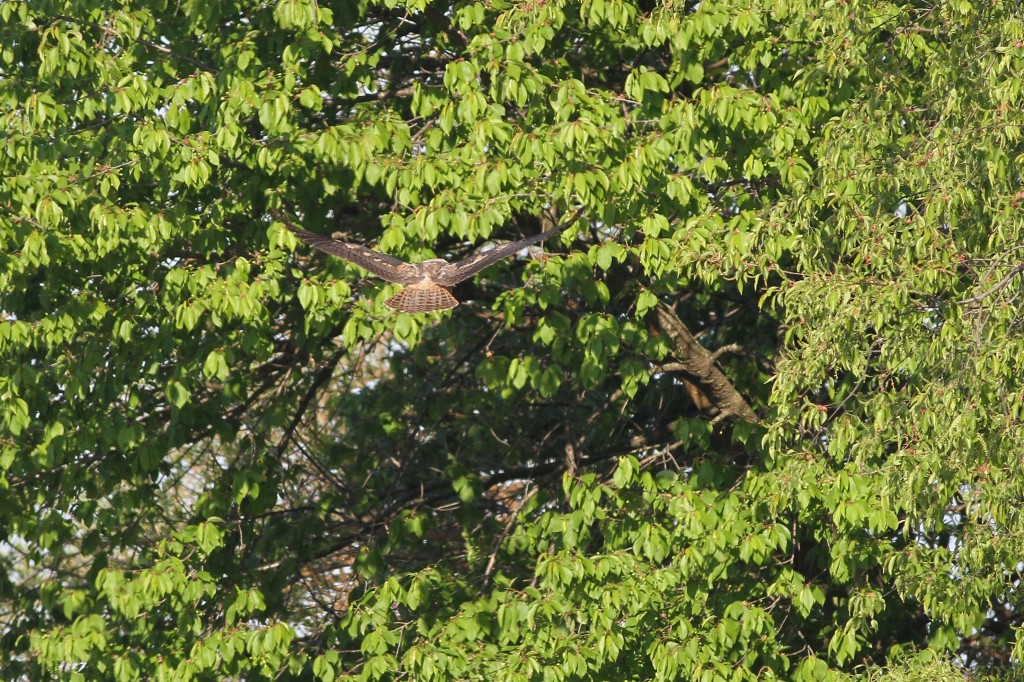 Awkward landing! Not the greatest perch to land on! 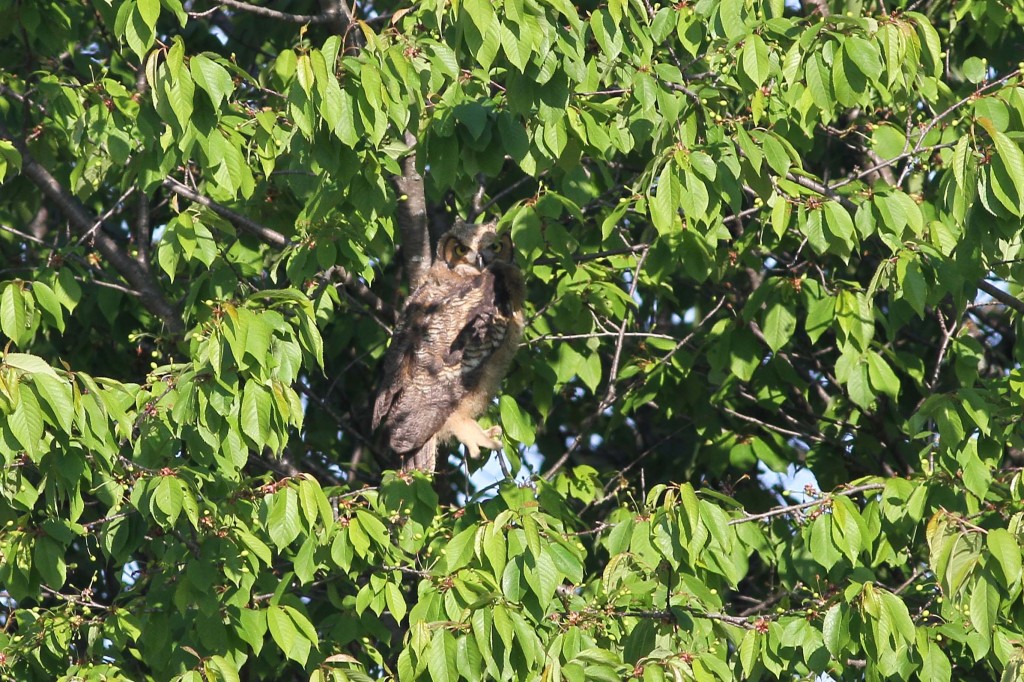 And awkward take-off, too! 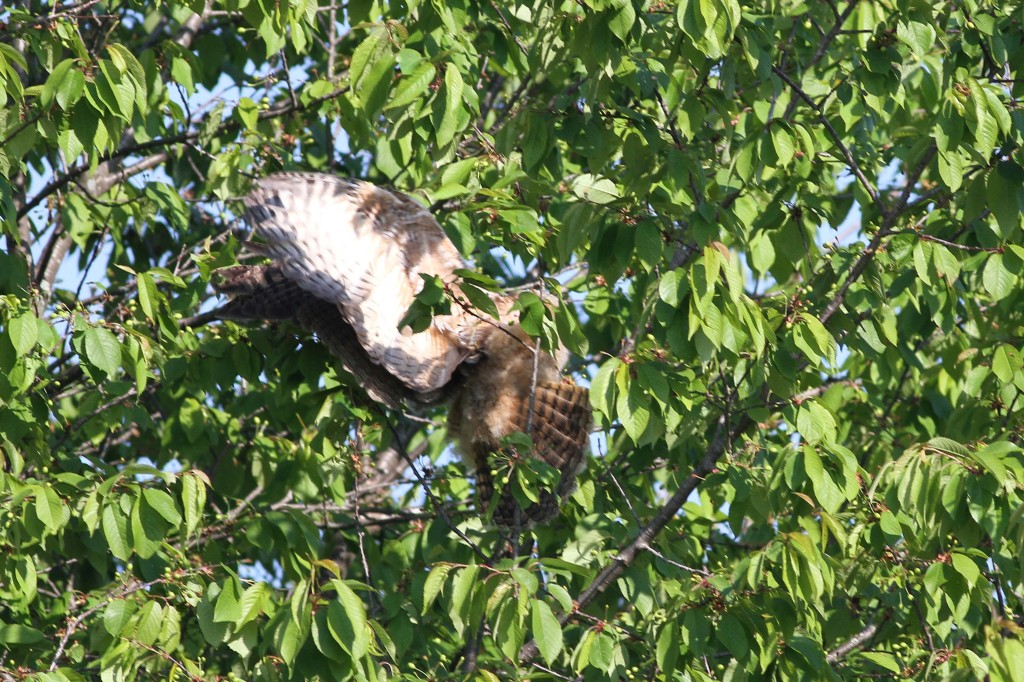 To learn more about Great Horned Owls, check out Allaboutbirds.org where nesting information was gleaned for this post!