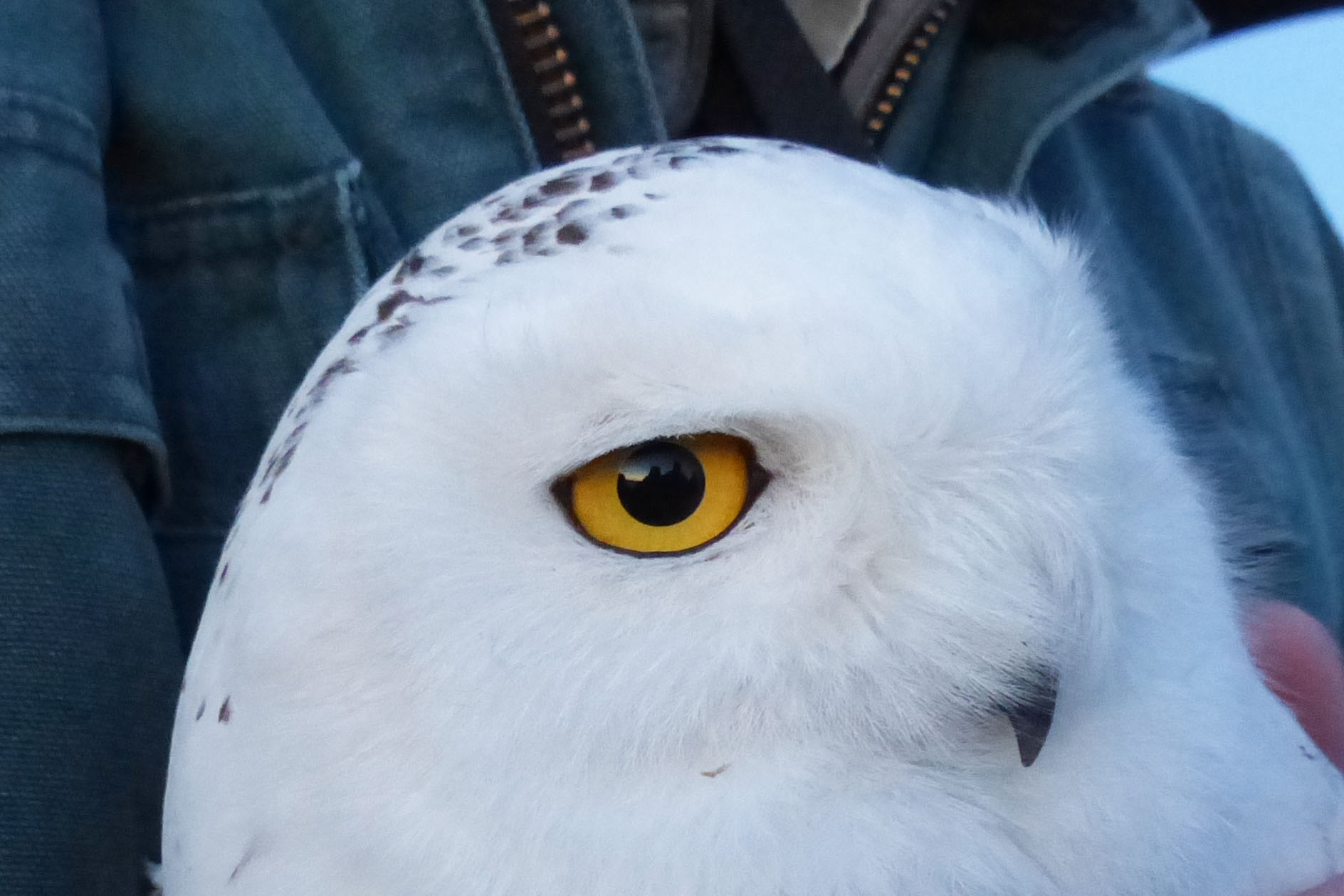 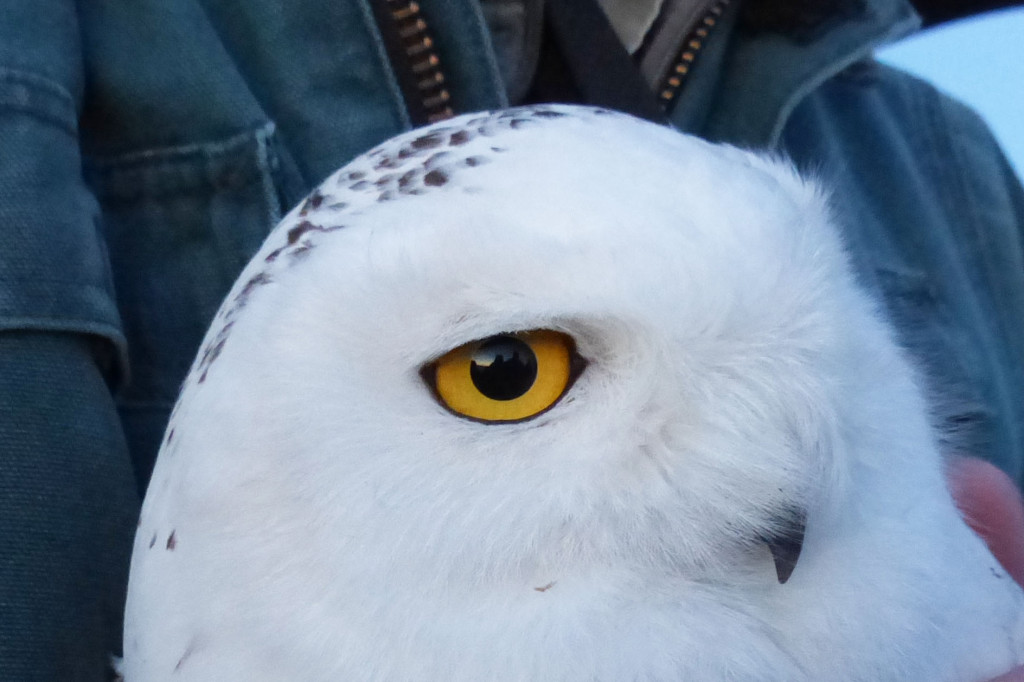 Look at that beautiful golden eye!  What a docile, mysterious creature!

According to the All About Birds blog by Cornell,

The massive Snowy Owl irruption going on this year—the biggest in decades—is captivating birders and nonbirders alike with unexpected glimpses of an avian superstar with hypnotic golden eyes. But this winter’s phenomenon is also an opportunity for science to learn about the lifestyle and biology of an arctic species we really know very little about.

The first hint of the massive influx came from birders tracking the growing irruption through eBird, a story that was eventually picked up in the New York Times and elsewhere. Soon after, the irruption was so clearly exceptional that naturalist and Pulitzer-nominated author Scott Weidensaul and colleagues saw it as a chance to learn even more using the newest methods in tracking, and DNA and feather analysis. Weidensaul and approximately two dozen researchers and supporters have come together almost serendipitously to form Project SNOWstorm. The scientists are attaching GPS transmitters to some of the birds, giving all of us the equivalent of a high-tech “ride-along” with our arctic visitors.

Because our area of upper Northumberland County was host to several Snowy Owls, Scott Weidensaul and his team were hoping to capture at least one of them and fit them with a transmitter.  On February 28, 2014, Pennsylvania Game Commission and Project SNOWstorm people converged on our little country backroads to set up their equipment.  They were hoping to be done before the crowds started coming to observe what they were doing, but of course, the Old Order Mennonite families who farm the area with the owls and the local birders who have been coming every late afternoon converged on the scene quickly.  All were told to park far back from the area where they were attempting to trap the two owls which were nearby and to stay quietly in their cars.

As I watched from my car, I took some photos through the windshield in the fading light.  Although Snowy Owls will eat just about anything with fur or feathers, they love birds; and pigeons happen to be the lure of choice for the SNOWstorm team.  The trap is a baited bownet which is sprung by yanking the trigger line from the car over 50 yards away.  We all held our breath as the owl made several attempts to snag the bait.  Finally, he was in position and Scott released the trigger, jumped from the car and quickly ran out to take the owl from the net. 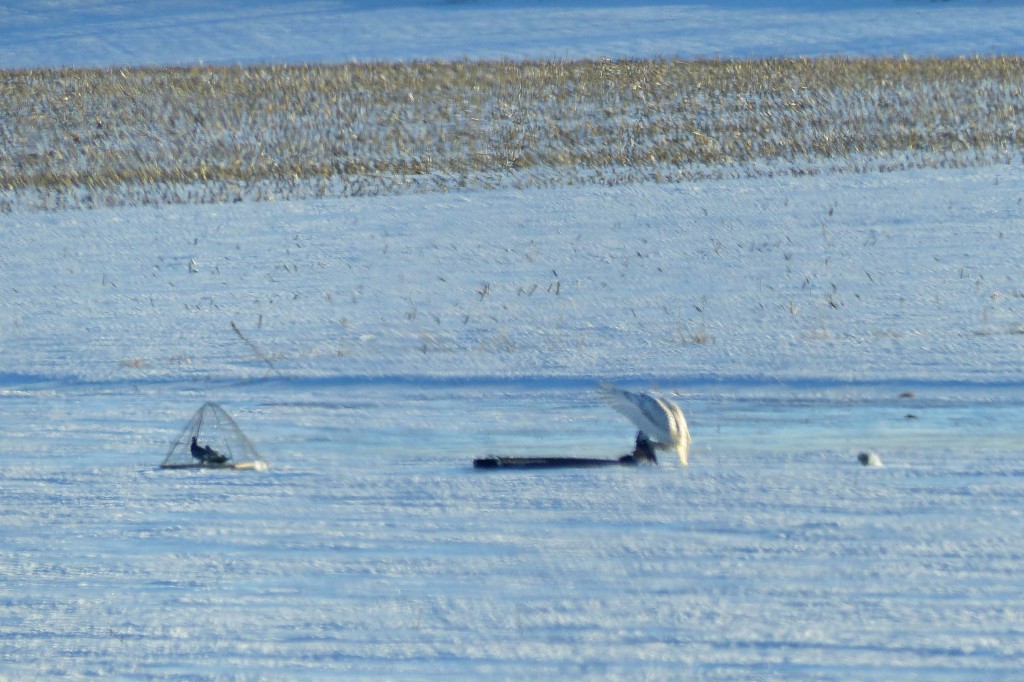 Going in for the bait!  Scott pulls the trigger from his car which springs the trap 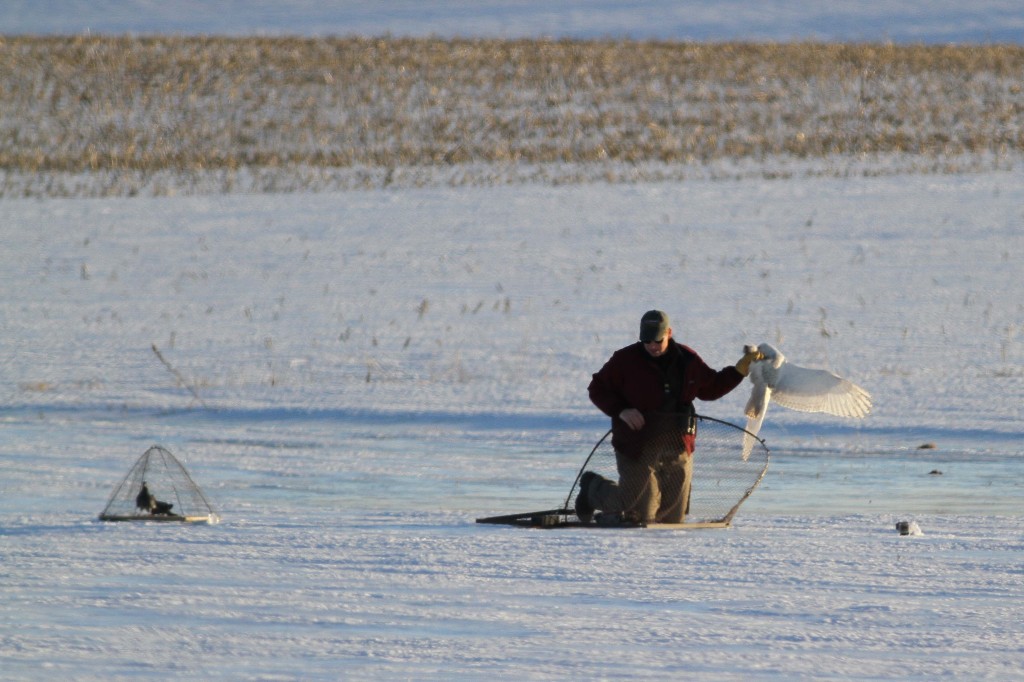 Releasing the owl immediately from the trap 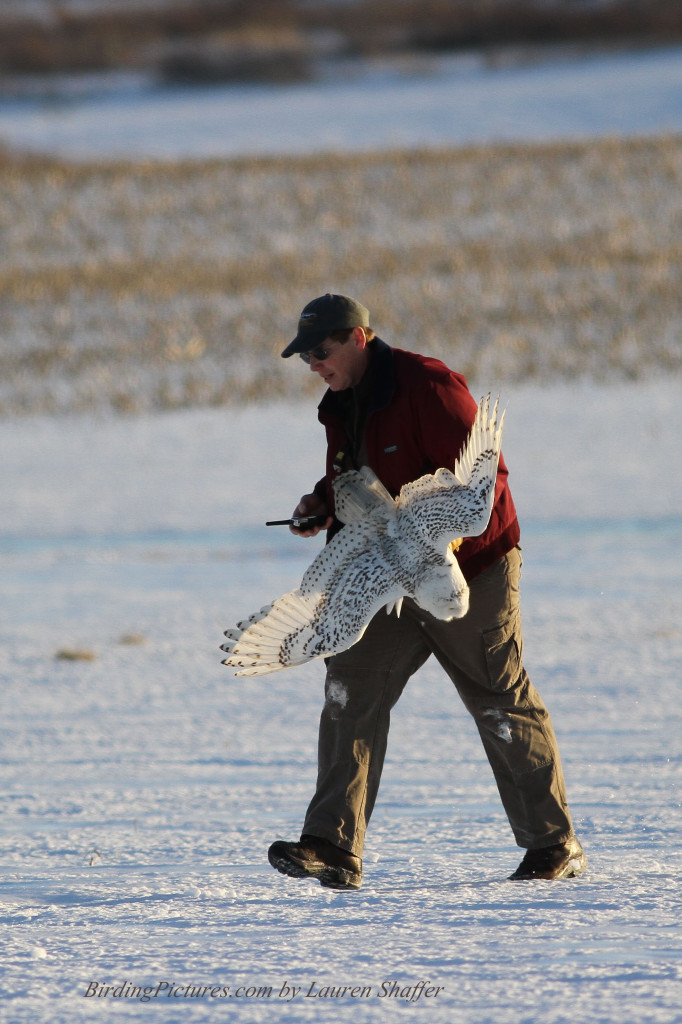 Scott Weidensaul quickly bringing in the Snowy to be banded

While one owl was quietly held, we were told to stay in our cars as the trap was reset and another owl who had watched the entire scene quickly came and repeated the scenario!  We couldn’t believe that the Snowy had sat in a nearby tree, witnessed all the commotion and yet came directly for the lure.   After that everyone came out of cars and down the lane on bicycles and buggies, and gathered round to observe these beautiful, docile creatures up close.  Professor Eugene Potopov who recently wrote The Snowy Owl was also on hand, and used an infrared instrument to demonstrate body heat coming from the bird.  Then working from the back of his car, Scott Weidensaul took various measurements and banded the birds, talking all the while to the children who were watching.  I was struck by his deftness with the birds as well as with the kids enthralled with the whole experience.  They will never forget that evening, shivering in the cold, but warmed by the glowing yellow eyes of a Snowy Owl! 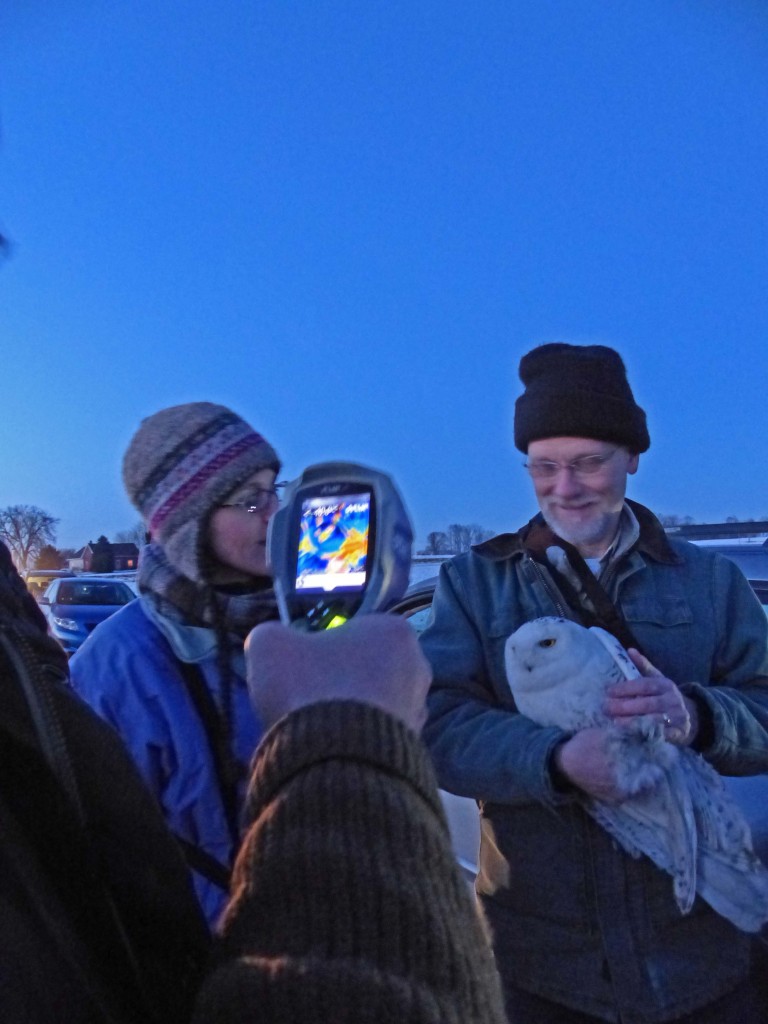 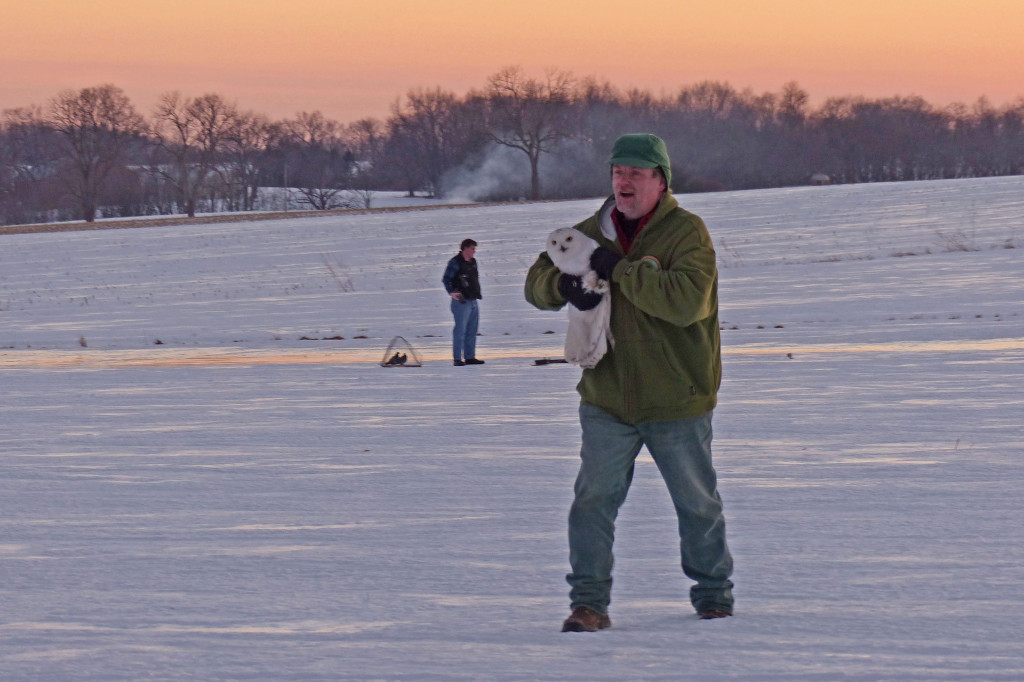 An exhuberant Wayne Laubscher, also with the Game Commission, gets to bring the second Snowy in. 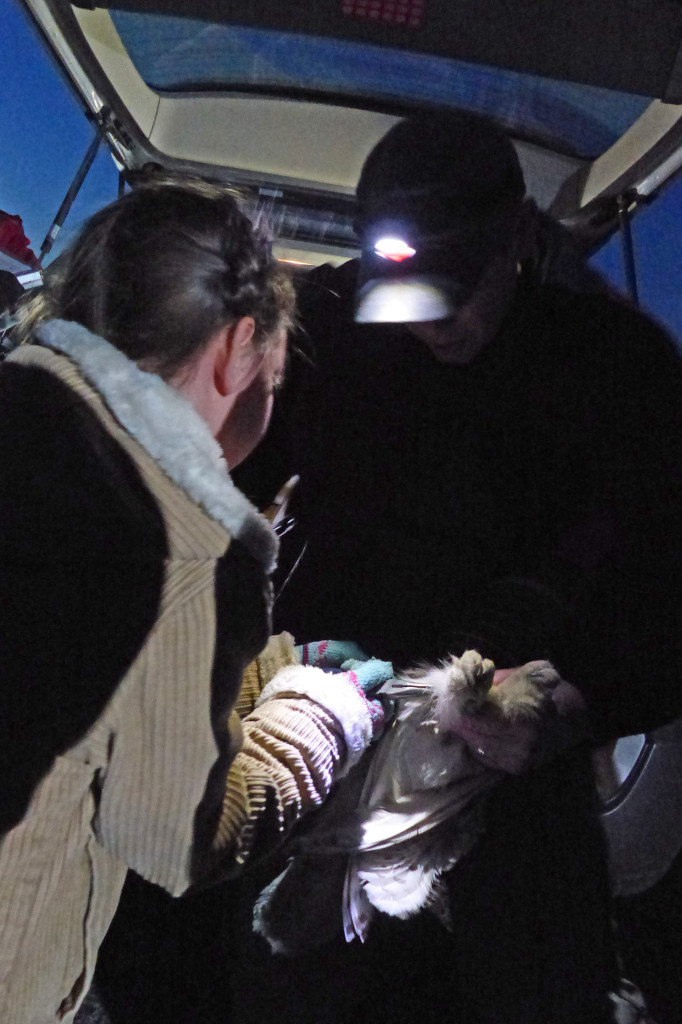 Scott Weidensaul bands the owl with a little help from his friends. 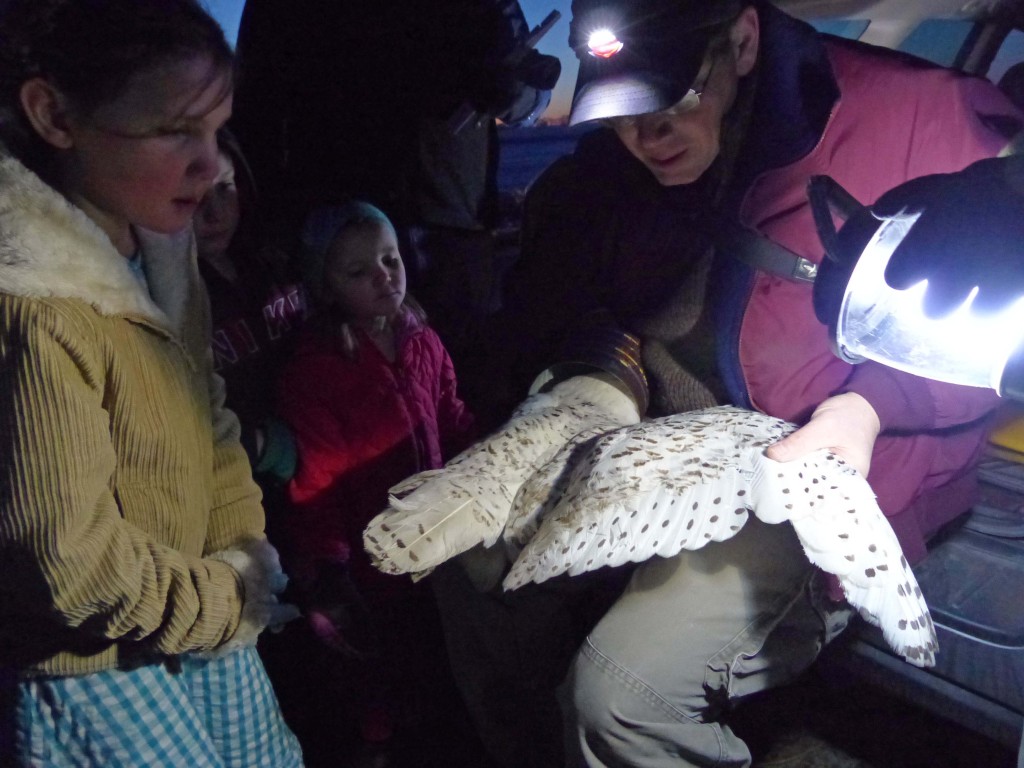 A teaching moment: Scott asks the children whether the owl has spotted or streaked feathers. He tells them that spots mean that it is a male.

After weighing both young males, it was determined that though they were healthy, neither weighed enough to be fitted with transmitters.  There’s a slight possibility that they may try again with another larger female owl some evening, if they can catch her.  After all, there were five present in the neighborhood last night!