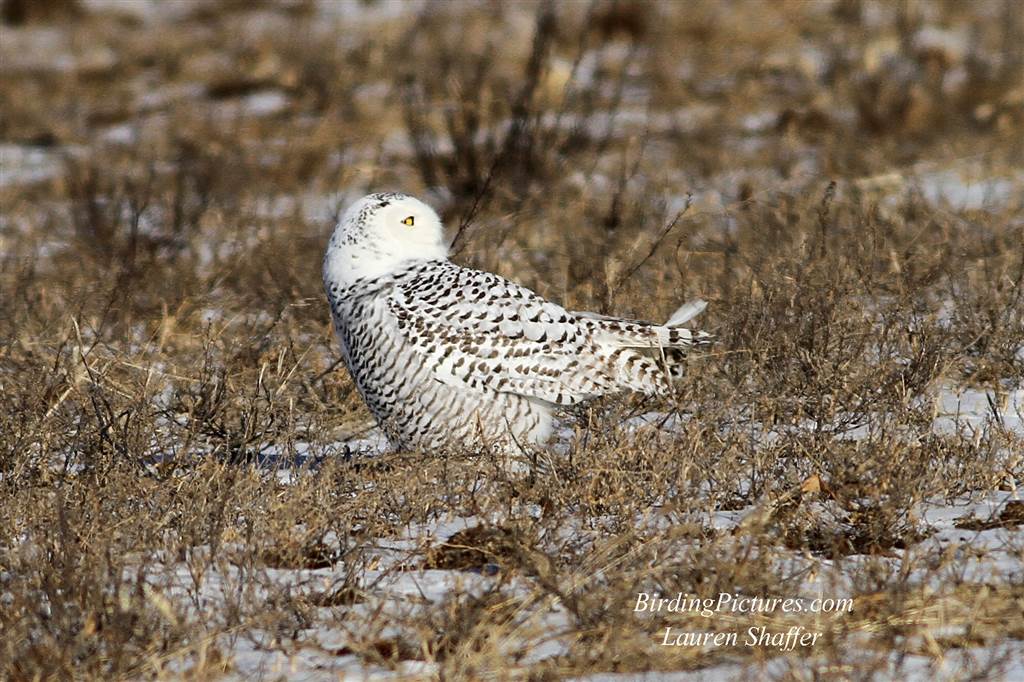 Its head is turned completely around, always on the alert. Some crows were dive bombing him.

Snowy Owls are on the move!  There is an irruption of Snowy Owls from the Arctic to mainly the North-eastern United States, like there has never been seen before.  In the beginning of the irruption in early winter, one observer in Newfoundland was able to see 75 owls from one vantage point, and over 200 along one road!  Many were seen in New England, the Great Lakes, and also the coast of NJ.  But Pennsylvania has its fair share as well.

There may be hundreds more now, and people lucky enough to have seen owls may have discovered only the tip of the iceberg!  The owls prefer habitat that is flat and treeless which is similar to their breeding grounds in the Arctic.  Unfortunately, they love airports, which are hazardous to their well being, as well as hazardous to the airplanes.  An owl which had been trapped, fitted with a solar-powered transmitter, and released, went back to the Philadelphia airport and was hit by a plane. These transmitters are giving a lot of information about the habits and whereabouts of these visiting Snowy Owls. They record and transmit location in three dimensions: latitude, longitude, and altitude.  Information can be found about this citizen-funded research program at Project SNOWstorm.

The beautiful farmland in our rural area is host to at least a few of these Snowy Owls, and I was fortunate to finally be able to photograph the owl in my own neighborhood.  It’s not easy to find a white owl in a snowy field on a bright day, especially when it moves around from farm to farm.  When one is sighted, local birders keep in touch through our Audubon Facebook page to let others know where the owl is located.  Cars line up along the road, with birders and scopes and cameras to join in the party, especially in the evening!

After getting permission from the landowner, a friend, Brent Bacon, and I slowly walked into the field and looped around with the sun behind our backs.  We didn’t want to approach him directly and spook him.  He tolerated our presence till we were about 50 or 60 yards away, then he flew low over the field a short distance to put more space between us.  There is always a tension between wanting a better picture with a closer view, and making sure the subject is not stressed by our persistence.  We knew when it was time to back off and leave him alone.  We were both shooting with a 400 lens which gave us fairly decent photos, but a tripod would have helped.  What a thrilling experience to be able to spend a little time with this Artic bird! 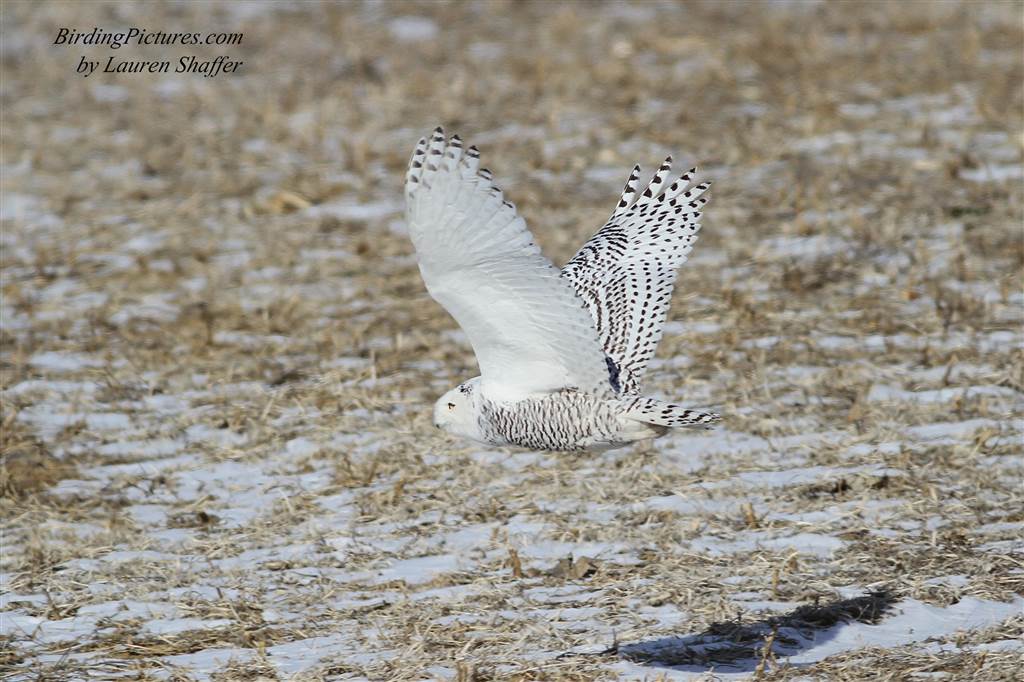 Flying a little further off, low to the ground. 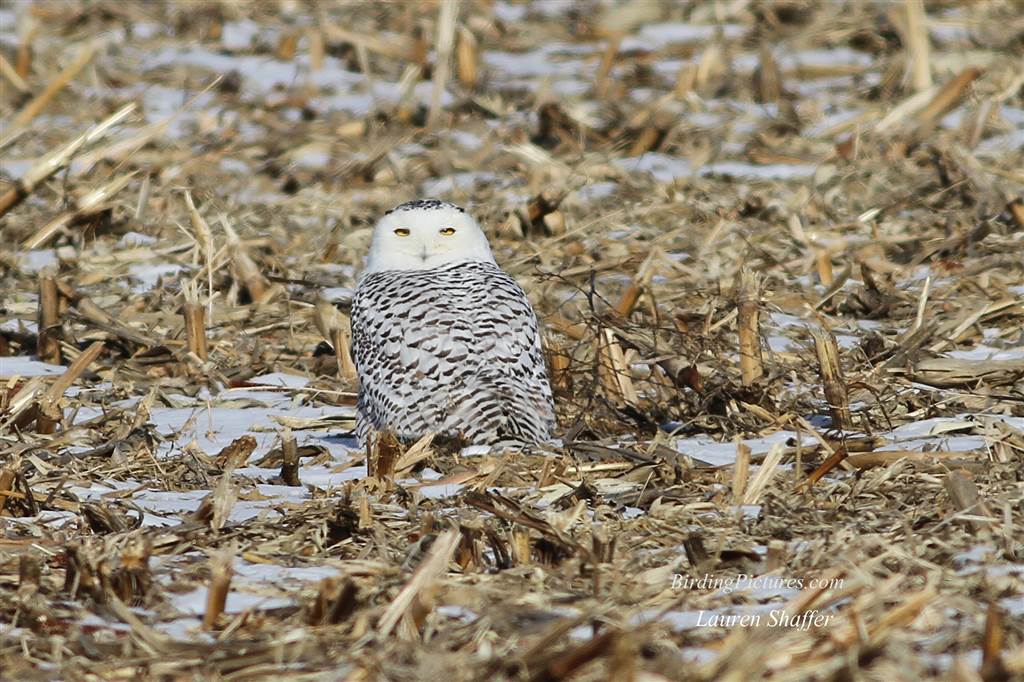 Notice the very slight “ears” on top; not always seen.  It’s turned away from me, but still keeps its yellow eyes on its surroundings. 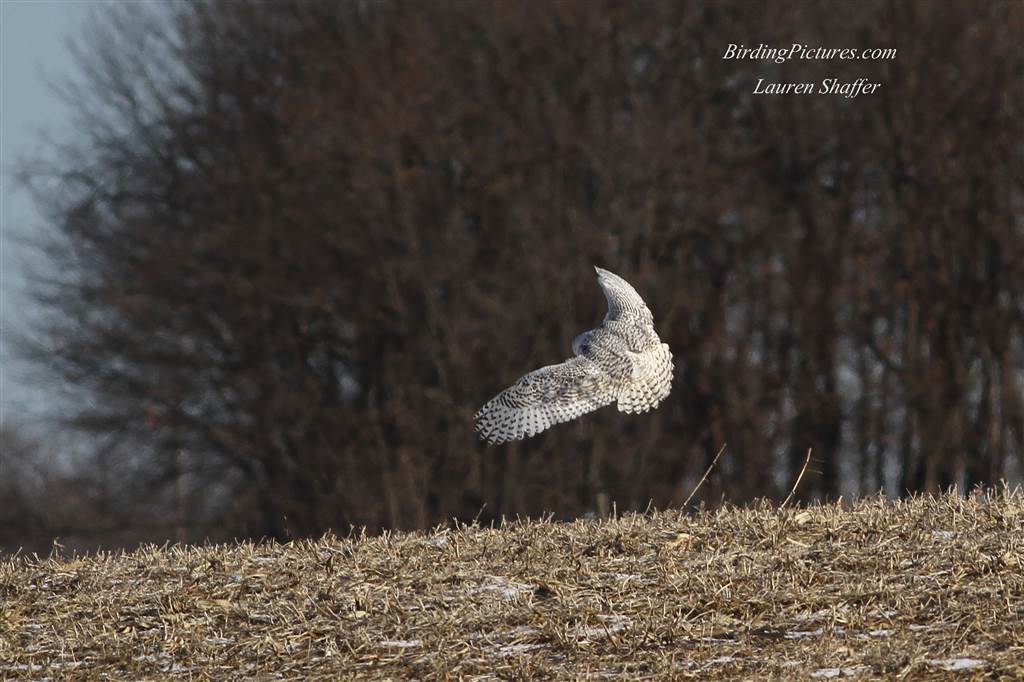 Such a beautiful creature!

Look at that wingspan! About 5 feet wide. Females are larger than the white males.  This Snowy is either a female or a juvenile male. 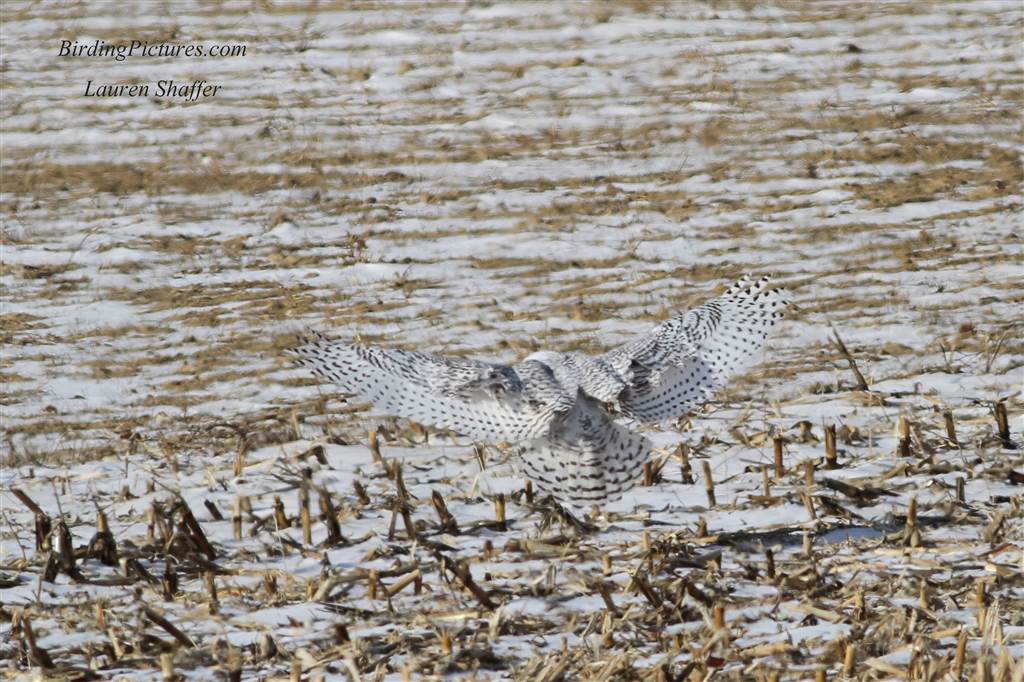 Thick fluffy layers of feathers, and not a sound of its wings when it flies.  Owl feathers are structured differently to be silent.

Rabbits, squirrels, and voles don’t stand a chance against those huge feathered feet!